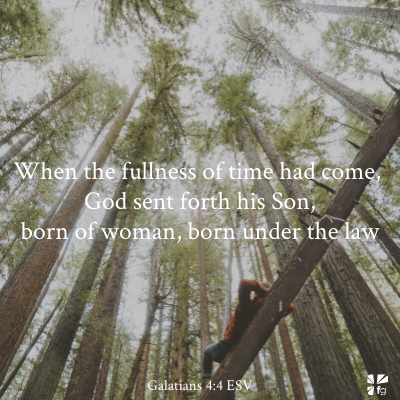 The Bible’s story, like any story, has a beginning. In the beginning God created all things, and He called His creation good. But because of the choices Adam and Eve made, the relationship with God was broken, and the result was a world of chaos. God then called a man, Abraham, to build a nation and follow his instructions. We’ve come to know this nation as Israel.

Rescuing this nation out of Egypt is a story that the nation was to memorialize for future generations so that they would never forget how God delivered them from slavery. It became the annual remembrance called Passover. That was the centerpiece of their exodus from Egypt and began their journey to the land God had promised to them. This Passover story, like Mephibosheth’s story, reflects the greater story of the Bible, in which the creator God wants to rescue humanity from that which separates them.

But once in the promised land, the Israelites fight the inhabitants of the land, they fight among themselves, and they fight their God.

How will God rescue humanity?

WHAT HAPPENED BETWEEN THE TESTAMENTS?

Before we unfold more of God’s rescue story, it’s important to know where we are along the biblical narrative.

On our historical timeline, about four hundred years separate the Old and New Testaments. The Northern Kingdom, Israel, was annihilated by Assyria (722 BC), which dispersed many of the remaining Jews from the Northern Kingdom throughout the Middle East. This came to be known as the diaspora — the dispersion.

But the Babylon reign was not indefinite; the Persians defeated the Babylonians and allowed a remnant of Israelites from the Southern Kingdom, who were living in exile, to return to their homeland. The prophetic books of Ezra and Nehemiah tell of this return.

Four hundred years later, Rome is now in the picture.

Caesar Augustus is the reigning Roman emperor when Jesus is born. Augustus was known for transforming Rome from a city of clay to a city of marble. A man of great ambition but also politically wise, Caesar Augustus initiated great building projects, and it was his idea to enroll the known world in a census so that all would be taxed. His census and tax decree began the chain of events that forced Jesus’ parents, Mary and Joseph, to leave their home in Nazareth and travel to Bethlehem because everyone had to return to the place of their family origin for the census. Bethlehem, known as the City of David, would be the birthplace of Jesus. It was during the reign of Caesar Augustus that the Roman Empire enjoyed a time of great peace known as the Pax Romana, or “Roman peace.”

The New Testament writer Paul comments on this time when Jesus enters the story of the Bible:

When the fullness of time had come, God sent forth his Son, born of woman, born under the law, to redeem those who were under the law, so that we might receive adoption as sons. — Galatians 4:4-5 ESV

And so the stage is set for the rescue plan to continue, following the time of the prophets and the kings. The Israelites live as a decentralized people, in Israel and throughout the Middle East and beyond. Caesar Augustus has extended the Roman Empire throughout the known world and brought economic prosperity and peace to the land. The great Roman road system has made travel safer and easier. The Israelites, however, still wait for what the prophets call a messiah — a ruler who will renew their kingdom and lead them out from under the oppression of Rome. With this context in view, let’s look at part two of the English Bible — what Christians call the New Testament — and the story of the rescue.

The New Testament begins with the Gospel according to Matthew. Matthew, Mark, Luke, and John write basically the same story but from each author’s perspective, detailing the events in the life of Jesus. Matthew is a Jew writing to a Jewish audience and makes connections to the Old Testament, with an eye toward showing Jesus as the promised Messiah, the king of the Jews.

One emphasis of the gospel of Mark is to make the story of Jesus relatable to Gentiles (non-Jews). It is short, fast-paced, and easy to understand.1 In the book of Luke, the stated purpose is to give readers an orderly and accurate picture of Jesus’ life. The book of John, the last of the gospel accounts, takes a more theological approach to the life of Jesus, emphasizing Jesus as the divine Son of God.2

As I’ve noted, these first four books are referred to as the Gospels — the word gospel meaning “good news,” or “joyous tidings” — because of their focus on the ministry of Jesus, which includes His death and resurrection.

After the Gospels, the next book, called Acts, tells of the deeds of the followers of Jesus. It primarily focuses on two of Jesus’ followers: Peter, who, during the time of Jesus’ trial, denied he knew Him; and Saul, who was also known as Paul, and who had persecuted followers of Jesus. It was while Saul was on his way to Damascus to arrest followers of Jesus that he was blinded by God and called to follow “the Way” (Christianity; see Acts 9:1-2) of those he was persecuting.

Following Acts, we find the books of the Bible referred to as letters. The letters were written to various audiences, addressing issues related to daily living and what was expected of the “church” (all followers of Jesus; see Matthew 16:17-18) when they gathered for worship. The letters also addressed questions that became relevant for those who believed that Jesus was the Messiah, things like how His death and resurrection had ended the sacrificial system because He paid the penalty once and for all for the sins of humanity.

The last book of the New Testament is the book of Revelation. It is set apart and unique. It starts by saying it is the revelation of Jesus Christ that God gave to John by way of an angel. Its stated purpose is “to show to His servants the things that must soon take place” (Revelation 1:1 ESV).

Excerpted with permission from This Beautiful Book by Steve Green with Bill High, copyright Steve Green and William High.

The Bible is a series of books gathered together to create the greatest story in all of history. As believers, we have the privilege of getting to know it cover to cover! The chief story, of course, is one of our Unlikely King! Come share your thoughts with us on our blog. We want to hear from you! ~ Devotionals Daily