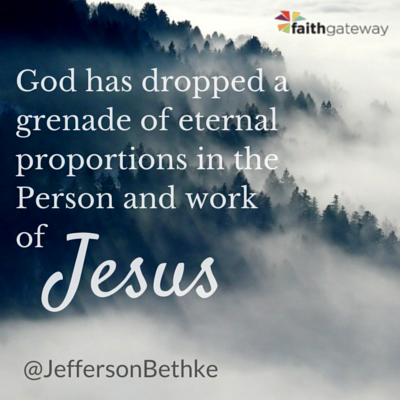 I remember when I first started following Jesus, I did what most people do. I opened the Bible. I didn’t really have much of a context of where to start or what to read so I wasn’t too far off from the classic “close your eyes, open the Bible to any page, point your finger, and start reading there.”

I didn’t always go that far, but I do remember one particular moment. I wanted to read more about Jesus, so I did what most any normal logical person would do. I turned to the very first book of the New Testament that tells the story of Jesus’ life — the book of Matthew.

I remember being excited and eager to learn and read, and then I was gravely disappointed (most of us wouldn’t admit to being “disappointed” by something in the Bible, but if we are honest, it happens sometimes). I was disappointed because I was hoping for this cataclysmic text that would shatter my world, and if you are familiar with your Bible, the beginning of Matthew on the surface is anything but that. It’s a list of names. Or if you grew up in church you probably call it a “genealogy.”

Really? This is how the New Testament starts? A bunch of names?!

But one thing we have to work hard at as 21st century western Christians, is enter into the world of the Bible. What would a first century Jew hear when they read this book? That’s when stuff becomes explosive.

There are tons of themes and lessons in the list of names, including the bold claim that Jesus is the end of the exile period for Israel, but there’s one thing particular that has given me a renewed hope and strength. It has to deal with numbers. There’s something going on in the beginning book we can miss out on if we don’t dig in.

If you count all the names you can interpret it in two different ways — it’s either 3 groups of 14 names, or it’s 6 groups of 7 names.

Now why is that important? Again it comes down to being in the skin, spirit, and world of the first century. Matthew is by far the most “Jewish” gospel — and because of that he’s trying to communicate things differently than the others.

Now to any first century faithful Jew who knew the scriptures, the concept of 6 groups of 7 names would’ve jumped off the page. It would’ve practically been screaming to them. Why? Because if there was 6 groups of 7 names, then that means the very next name would be the beginning of the 7th group of 7 names. And the idea of 7 7’s had been in the Jewish world for hundreds of years, as the sign of completing and celebration. More specifically, if pointed to the party and celebration of Jubilee.

The Jubilee year would be the completion of the sabbatical years. Every 7 years God commanded Israel to take an entire Sabbath year. Rest. Let the crops chill. Enjoy His presence. But every 7th cycle of 7 years (so every 49 years) Israel was to throw an incredible party that entailed a few things — large scale debt would get cancelled, slaves would be set free, and God’s presence would be particularly manifest in the year of Jubilee. And during Jubilee they were commanded to celebrate, party, sing, dance, and shout (you can imagine why if you were in grievous debt or a slave!).

Our spiritual debts are cancelled. We as slaves to sin are set free. And God’s presence is particularly made manifest in the fact that God Himself, Jesus, is walking among us! That’s what the Advent season is celebrating, and that’s why we sing and rejoice and party. God has dropped a grenade of eternal proportions in the Person and work of Jesus. When He entered into our world, He was bringing with Him an entire world Himself — a new way to live, to act, to love, and to know God face to face.

That’s what Advent is about and that’s what Jesus is about. This Christmas season don’t be afraid to put on first century ears and hear the declaration of the gospels telling the story of this God who decided to put on flesh and walk among us. When you do, you’ll notice that even a list of names isn’t a list of names but a declaration that God is here, and He’s bringing forgiveness of sins and the ability to know Him for anyone who trusts and receives.

Did you know that Jesus ushered in the true Jubilee? If you’ve received Him as Savior,  your debt is paid in full, you are completely free, and God is with you! Come join the conversation on our blog! We would love to hear from you! ~ Devotionals Daily