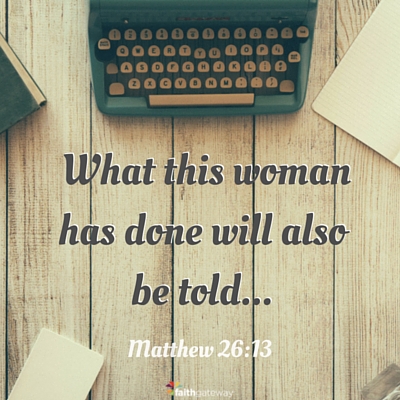 Nothing reveals Jesus’ manhood like His countercultural relationships with women.

Women weren’t simply beneficiaries of His miracles and teaching, although that alone would be enough to change how men regard women today. The women Jesus knew were active facilitators and strong, indispensable allies in His mission. Most notably, His own mother was the first to give up everything to follow Him.

At the start of Jesus’ story, everything was riding on the shoulders of one extraordinarily courageous young girl.

Jesus had deep friendships with women who were His beloved friends (the sisters Mary and Martha, and Mary Magdalene, for example). Women traveled with Jesus and His disciples, financially supported His ministry, and hosted His efforts (Luke 8:1-4). Remarkably, women stood with Him through the fiercest battle of all when His male disciples ran for cover. The women stuck with Jesus to the bitter end — witnessing the horrors of His execution and the finality of His burial, and sealing traumatic images in their minds they would never be able to erase. But they were indomitable. Before the sun rose the next Sunday morning (Roman soldiers notwithstanding), the women were back again at His tomb bringing spices to anoint His body, only to be gobsmacked by the astounding news that “He is risen!” It is difficult to imagine the emotional whiplash this caused or their flushed, excited faces as they fulfilled the rare privilege of breaking the news of Jesus’ resurrection to His disbelieving disciples.

The women were first to proclaim the gospel.

I grew up on these women’s stories. But only as an adult did I return to look at them with new questions I was facing. In His miracles, His teaching, and His conversations, Jesus makes strong countercultural statements about the high value of women and girls in utter defiance of His patriarchal culture’s way of seeing them. Mary of Bethany was one of the standouts for me. Jesus’ interactions with this Mary takes the discussion of ezer-warrior to an entirely new level — well beyond making space at the table for women or “allowing” women to trespass into all-male territory.

Jesus’ story includes three episodes involving this Mary; they are fragmented as no single gospel writer covers all three. But when I looked at Jesus’ three encounters with Mary in toto, a whole new picture of Jesus emerged. In the first, Rabbi Jesus has a female student in His theological seminary as Mary sits at His feet to learn along with the men (Luke 10:38-42). Jesus is teaching her the same deep theology He taught His male disciples. He doesn’t just “permit” her to listen in either. When her actions are challenged and juxtaposed against the appropriate sphere for women, Jesus defends her choice in the strongest terms and recruits her sister Martha to join her.

Jesus and Mary meet a second time in the midst of a crisis. Mary is completely devastated and consumed by grief over the double loss of her beloved brother Lazarus and of Jesus’ failure to come in time to prevent his death (John 11:1-46). When Jesus seems most bewildering and disappointing, He takes her deeper and she learns to trust Him, no matter how dark things get. In the final and strangest episode of all, the pieces of Mary’s story come together when she anoints Jesus with expensive perfume (Matthew 26:6-13; John 12:1-8).

Like all of Jesus’ disciples, Mary struggled to understand the upsetting things He was saying about laying down His life. His words conflicted with her messianic expectations too, especially with daily reminders of the Roman occupation. So when Mary invades an all-male feast intended to honor Jesus and anoints Him with nard — a perfume the ancients used to pour on a corpse and an aroma everyone present recognized — her actions are intentional and infused with meaning that isn’t lost on Jesus. She was His student. As she sat at His feet, He taught her the same things He told His male disciples about His approaching death. He had taken her to new depths of faith in the death of her brother and her disappointment with Him.

In the midst of a party atmosphere, six days before the Passover that goes down in history as the Lord’s Supper, with the looming battle ahead weighing heavily on Jesus and His male disciples in denial of what awaits Him, Mary’s anointing breaks His isolation and affirms the mission He’s been telling His followers about for a long time. It’s the only time anyone stood with Him and said “Yes” to the cross and to the mission His Father has given Him. In contrast, Peter’s response was, “Never, Lord!… This shall never happen to You (Matthew 16:22).” At Mary’s anointing of Jesus, the disciples all chime in with Judas Iscariot to criticize her and point to the terrible waste of “expensive” perfume. In utter contrast, Jesus not only defends her actions, He interprets them.

When she poured this perfume on My body, she did it to prepare Me for burial adding, She has done a beautiful thing to Me. — Matthew 26:10-13

Jesus’ relationships with women within an intensely patriarchal culture represent a paradigm shift for male/female relationships. Even for Jesus, “It is not good for the man to be alone.” What is especially poignant is that Jesus’ relationship with Mary sets a new tone. He values her theological insight and needs the resulting spiritual ministry this ezer offers. In this episode, Mary’s ministry strengthens Jesus for the kingdom battle His Father calls Him to fight. Stan Grenz puts a fine point on the radical implications of Jesus’ encounter with the malestrom.

Coming to this earth as a man, Jesus liberated both men and women from their bondage to the social orders that violate God’s intention for human life-in-community. Jesus freed males from their slavery to the role of domination that belongs to the fallen world, in order that they can be truly male.”1

Ezer 2 is a Hebrew noun that in the Bible always appears in a military context and is recognized as a military term. This is image-bearer language, for ezer is used most often in the Old Testament to refer to God as Israel’s Ezer when His people are oppressed and suffering at the hands of their enemies.3 So strong is the word ezer that Jewish parents chose it when naming their sons.4 Ezer is an explicit way that God’s daughters are called to image God. She is a warrior on behalf of God’s kingdom and joins the man in battling the darkness, advancing God’s kingdom, and watching his back.

Names like Eli-ezer, Abi-ezer, and just plain Ezer appear in the Bible.

Even in recent history, evidence is strong that the name Ezer still carries a lot of weight. Israel’s seventh president was Ezer Weizman (1924–2005). He was an Israeli military hero who built an interna- tional reputation as a fighter pilot, commander of the Israeli Air Force, and a world leader involved in Middle East peace negotiations.

Watch the Video for Malestrom

How does the way that Jesus interacted with women change your view of the role, importance, and value of women today both in culture and in the Church? Come join the conversation on our blog! We want to hear from you!