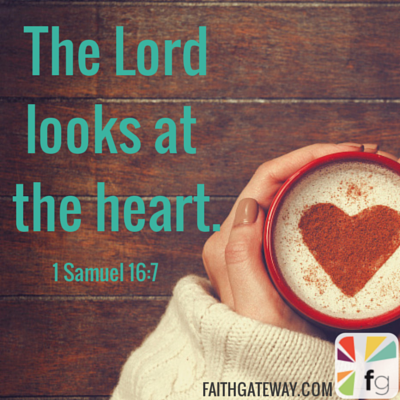 If you take some time to study the Scriptures and stop to consider the people chosen by God to change history, it’s a bit surprising. Noah, though a righteous man in his day, struggled with a bit too much drinking in his older years, yet he was used by God to save humankind. Jonah was a coward, yet he was chosen to preach to Israel’s enemies. Moses was a murderer with an anger disorder, yet he was used to lead God’s people out of Egypt. David was both a murderer and an adulterer, yet he was still the only individual in Scripture described as a man after God’s own heart. Jeremiah struggled with depression, and Rahab was a prostitute. These are just a few of the men and women that God used to change the course of history.

Apparently, God has different criteria than we do when selecting people for His purposes. In fact, that’s exactly what God tells the prophet Samuel, as we read in 1 Samuel 16:7:

“The Lord said to Samuel, ‘Don’t judge by his appearance or height, for I have rejected him. The Lord doesn’t see things the way you see them. People judge by outward appearance, but the Lord looks at the heart.’ ”

We tend to evaluate people by external standards of success, but God is able to perceive what we often miss, the hidden attitudes of the heart.

And what about Jesus — whom did He choose to teach, train, and disciple in ministry?

When Jesus chose His followers, He turned the entire system upside down. According to the old ways, students would approach a particular rabbi and ask to be His disciple. But when Jesus walked onto the shore of the Sea of Galilee one day early in His ministry and called out to Simon and Andrew to come follow Him, He was calling two rabbinical rejects — two brothers who had not been chosen by another rabbi. Jesus promised them that if they would leave what they were doing, he would make them into something new — fishers of men.

Jesus had a different model of selecting His followers, and He often chose the ones whom others had missed or passed over.

The apostle Paul is another great example of God’s pattern of bypassing the normal systems of human wisdom. Before he became a believer, Paul did unspeakable things to the Christians of the day, yet God still chose him to write a large portion of the New Testament. We see in Acts that Paul organized a plan for the first Christians to be martyred. How many of our churches would willingly place a man like Paul in a position of leadership today, a man who had formerly murdered brothers and sisters in Christ? By today’s standards (by any standard, for that matter) God’s choice of Paul (then called Saul) is just weird. Or is it?

Some things never change. I don’t think it’s a stretch to say that many of the people God chose to lead His people would not be candidates for leadership in our churches today. Even beyond the cultural differences, it’s safe to say that most of them wouldn’t get a second glance. They would lack the pedigree and experience, they would have glaring character flaws, and several of them would have questionable pasts. But I want to challenge you to reconsider your paradigm for selecting leaders.

If we’re serious about being a dangerous church, we need to take risks — even in our approach to staffing our churches.

Look for Heart and Integrity More than Qualifications

Over 90 percent of the people on staff at Living Hope have come from within our church. When we hire someone for a position, our first question is not about their educational background.

Whether the candidate went to seminary is never my first question. Instead I focus primarily on two things: the integrity of their heart and the skill of their hand. In this, I take my cue from a description of King David, who, the psalmist tells us, led with integrity and skill: “David shepherded them with integrity of heart; with skillful hands he led them” (Psalm 78:72 NIV).

Integrity is a combination of several different things. First of all, a person of integrity understands and accepts the culture of our church — our identity and our mission. When we hire someone, we are not simply looking for a person to fill a job. We are looking to help someone fulfill his or her God-given purpose in life, in the context of a ministry at Living Hope. To this day, we have very few job descriptions or written expectations for people, and our employee manual is quite small. This is intentional.

Integrity is also a matter of character.

All of the staff at Living Hope are considered leaders in our church, so their character matters.

In addition to the specific guidelines given in Scripture, one of the most important things we require of our staff is that they lead by their example. Are they willing to be with their teams, work alongside people, and roll up their sleeves to get the work done? Are they servant leaders? Are they willing to serve like Jesus served? Consider the example of Christ set before us in Paul’s letter to the Philippians:

“Each of you should look not only to your own interests but also to the interests of others. Your attitude should be the same as that of Christ Jesus: Who, being in very nature God, did not consider equality with God something to be grasped, but made Himself nothing, taking the very nature of a servant, being made in human likeness” (Philippians 2:4-7 NIV).

I want to hire people who will live and lead the way Jesus did. These are people who not only ask, “What would Jesus do?” but also do what He did. Pastors and staff who want to sit in an office during our church services rather than spend time with people are not people I want on our staff. The integrity of their character is shown in their willingness to do whatever it takes, and in their attitude toward serving others. These are the people you want around the table. Volunteers will often make the best staff members, because they are already doing the work for the right reasons.

Our ability to work together, focused on a common mission, is essential, and we want people who are able to develop healthy relationships with other people on staff.

The psalmist also describes David by saying that he had skillful hands. Obviously, people should possess some level of skill in the job that you are considering them for. In most cases it would not make sense to hire someone to produce and edit videos who has never operated a camera. But again, skill is not our first consideration, even though it is the easiest to immediately identify.

Jesus made it very clear that He would build His church. I find that when I try to control the outcome of our staffing situation to get the person I think is best, I often end up hiring exactly who I want. But that’s the problem. In getting what I want, I miss the opportunity to see who God wants in that position. When I allow God to take control, then I can rest in the peace of knowing He will bring the right person. How do we do this, practically?

For us, giving God the opportunity to bring that person means allowing the need to stay unmet for a time, to allow God a chance to fill it. Our job is simply to keep praying, talking, and meeting with people, and over time we end up finding the right person, the one we believe God had in mind from the very beginning.

Often we find that this person is broken in some way. Sometimes the individuals who will make the most difference in your church are the ones who are the most broken — the ministers that Henri Nouwen called “wounded healers.” Nouwen even went so far as to say that brokenness is an essential quality in spiritual leaders.

We have discovered that it’s worth taking a risk on people who have brokenness in their lives. Though it may seem foolish to choose them, these are often the people God uses to bring powerful change into the lives of others. Peter, the disciple of Jesus, is a perfect example of this. Peter was called by Jesus and walked alongside Him as a good friend for three years. He witnessed Jesus performing miracles and healing people. He was close enough not only to touch Jesus but also to look Him in the eyes. Yet after all that time, up close and personal, Peter still found himself denying Christ and running away from Him in fear.

Let’s be honest with ourselves. If one of our staff members treated a senior pastor the way Peter treated Jesus, we would discipline them and possibly fire them and expose their betrayal. Many leaders would likely wait a lengthy amount of time before restoring them into a significant leadership role. When someone fails, it’s easy for us to miss that part of Scripture that tells us to “restore him gently” (Gal. 6:1 NIV).

Our tendency is to cut our losses and move on.

Peter received a second chance, and he proved to be a capable and dedicated shepherd of God’s people, not in spite of his failure but likely because of his failure. His experience of brokenness emptied him of self-assurance and pride, as well as misguided notions of his own ability and strength.

There are people in our churches who worry they have nothing left to offer, and are still waiting to be asked to serve. Will you give them a chance? Come join the conversation on our blog! We would love to hear from you! 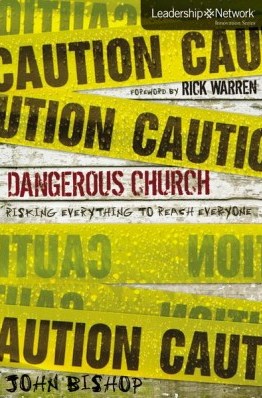