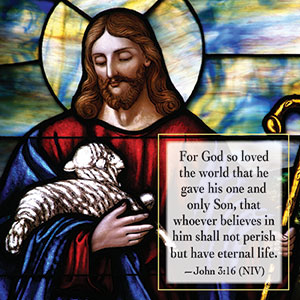 For God so loved the world that He gave His only begotten Son, that whoever believes in Him should not perish but have everlasting life. – John 3:16

If we ever memorize a verse of Scripture, it will most likely be John 3:16. It is the verse most often heard in the simplicity and beauty of a little child’s voice proudly reciting it from memory. John 3:16 is the one verse showing up on large placards at football games and other major sporting events. Those signs are located where television cameras cannot avoid its message. This is the one verse that has been spoken by many older saints as they breathed their final breath.

John 3:16 is the entire gospel in a nutshell.

Angel Martinez, the late evangelist who had memorized the entire New Testament, referred to John 3:16 as salvation’s formula and observed that it contained four very insightful truths. It is the gospel in one verse. John 3:16 reveals to us salvation’s cause, its cost, its condition, and its consequence.

“For God so loved the world”

The motivating factor behind God’s redemptive plan for every man and woman is His love for us. He not only loves us, He so loves us! Later, the apostle Paul sought to describe this love by speaking of its “breadth, and length, and depth, and height” (Ephesians 3:18), “God is love” (1 John 4:16), and this deep emotion is what brings about the possibility of our redemption; knowing Him in the intimate relationship of Father and child. God’s love for you is the motivating cause of salvation. “For God so loved…”

“that He gave His only begotten Son”

Our salvation, the free pardoning of our sin, and the promise of abundant and eternal life in Christ did not come without cost. Freedom is never free; it is always bought with blood. From the early chapters of Genesis, there is a scarlet thread woven throughout the pages of Scripture revealing the blood atonement. It climaxes in the final and complete sacrifice for sin on a Roman cross outside the city gates of Jerusalem. Jesus not only spoke of His love for us, “but God demonstrates His own love toward us, in that while we were still sinners, Christ died for us” (Romans 5:8). Our salvation in Christ came at a great cost: God “gave His only begotten Son.”

“that whoever believes in Him”

Salvation is not spelled “d-o,” but “d-o-n-e.” Many people, however, think their own good works are the pathway to eternal life. Consequently, they do this or do that, or they don’t do this or don’t do that, all in order to earn salvation. But our salvation is done. It is already purchased for us with the blood of Christ on the cross. Our part is to believe, to transfer our trust from ourselves and our own efforts to His finished work on the cross of Calvary.

To believe does not mean to simply give intellectual assent to the claims of Christ. It means to transfer our trust to Him alone for our salvation.

The most pointed question in the entire Bible is asked of the apostle Paul by a Philippian jailer:

Paul’s immediate reply follows in the next verse:

I believe in George Washington, but I don’t believe on him; I don’t trust my life to him. Salvation’s condition is through faith — and faith alone — in the finished work of the Lord Jesus Christ.

“should not perish but have everlasting life”

What a consequence! What a promise! Those without Christ are perishing, but those in Christ have the eternal promise of “everlasting life.” This comes not from our own human efforts, morals, or good deeds, but the promise is to those who realize that God’s love reaches down to us, was made possible through the payment of Christ, and is received by grace through faith alone; believing in the Lord Jesus Christ.

An unknown, yet wise old sage once explained John 3:16 like this:

For God... the greatest Lover

so loved… the greatest degree

the world… the greatest company

that He gave… the greatest act

His only begotten Son… the greatest gift

that whoever… the greatest opportunity

in Him… the greatest attraction

should not perish… the greatest promise

but… the greatest difference

have… the greatest certainty

As you memorize John 3:16, this old and oft-repeated verse, meditate on the fact that love is always something you do and remember that “God so loved the world that He gave.” Yes, God knows you, loves you, and has a wonderful plan for your life.

You probably are not surprised to learn that John 3:16 is the most-searched Bible verse. But, have you pulled it apart to really soak in the treasures of every word of this powerful verse? Leave a comment on our blog about God’s amazing gift of love through Jesus Christ! We love hearing from you!