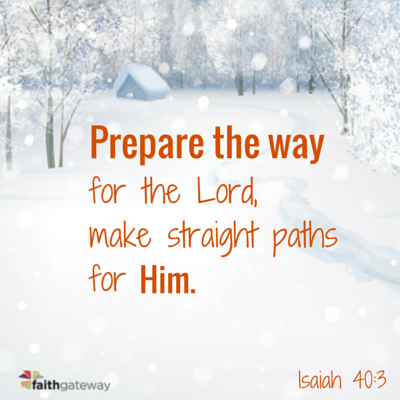 When it was time for Elizabeth to have her baby, she gave birth to a son… On the eighth day [her neighbors and relatives] came to circumcise the child, and they were going to name him after his father Zechariah, but his mother spoke up and said, “No! He is to be called John.”

They said to her, “There is no one among your relatives who has that name.” Then they made signs to his father, to find out what he would like to name the child. He asked for a writing tablet, and to everyone’s astonishment he wrote, “His name is John.” Immediately his mouth was opened and his tongue set free, and he began to speak, praising God. All the neighbors were filled with awe, and throughout the hill country of Judea people were talking about all these things. Everyone who heard this wondered about it, asking, “What then is this child going to be?” For the Lord’s hand was with him. And the child grew and became strong in spirit; and he lived in the wilderness until he appeared publicly to Israel. – Luke 3:3-6

He went into all the country around the Jordan, preaching a baptism of repentance for the forgiveness of sins. As it is written in the book of the words of Isaiah the prophet:

A voice of one calling in the wilderness, ‘Prepare the way for the Lord, make straight paths for Him. Every valley shall be filled in, every mountain and hill made low. The crooked roads shall become straight, the rough ways smooth. And all people will see God’s salvation.’  – John 1:6-9, John 1:15

There was a man sent from God whose name was John. He came as a witness to testify concerning that light, so that through him all might believe. He himself was not the light; he came only as a witness to the light.

The true light that gives light to everyone was coming into the world. (John testified concerning him. He cried out, saying, “This is the one I spoke about when I said, ‘He who comes after me has surpassed me because He was before me.’ ”)

A King was on His way. And they might have missed Him, the King who would fulfill Old Testament prophecy and become the main subject of the New Testament. So John was sent as a herald. John is the bridge, the threshold between what had been and what was about to be. He is the precursor, the forerunner, the opening act, the appointed messenger, carrying the promise that the centuries of waiting and preparing and anticipating were about to come to a great and glorious fulfillment. In John, the prophecies began to be fulfilled. And a few people understood it — the early adopters, those quick to catch on. But even to these, his own disciples, he pointed to Jesus, the One whose sandal he was unfit to tie.

What amazing clarity of purpose. Yet we can learn from him too. We can learn that preparation for the Messiah (then as now) requires a conversion and a transformation of the heart and mind. We can learn that the focus is not on us or on anything that we have done or hope to do, not even if it is for God. We can learn that our job, like John’s, is to spread the Good News, to point all people to behold Jesus and to seek His message of salvation.

Holy Father, Your grace humbles me without degrading me and elevates me without inflating me. You offer me great dignity and worth; without You I am nothing and have nothing. I am grateful that You have given me the astounding invitation to participate in something that extends so far beyond me, though I really have little to offer. I can only revel in Your kindness, grace and compassion. I know that You can accomplish what is needed in Your plan without me, and yet You invite me to participate in what will last forever. I ask You to guide me and to teach me how to fulfill Your unique purposes for my life. I pray that, by Your grace, I will become the person You created me to be, accomplishing the works you have prepared beforehand for me. In Your Son’s precious name I pray. Amen.

Isn’t it astonishing that we are invited to join John in pointing people to Jesus? This Advent season, with whom are you sharing the Good News and your personal story of what Jesus has done for you? Come share on our blog! We would love to hear from you! ~ Devotionals Daily