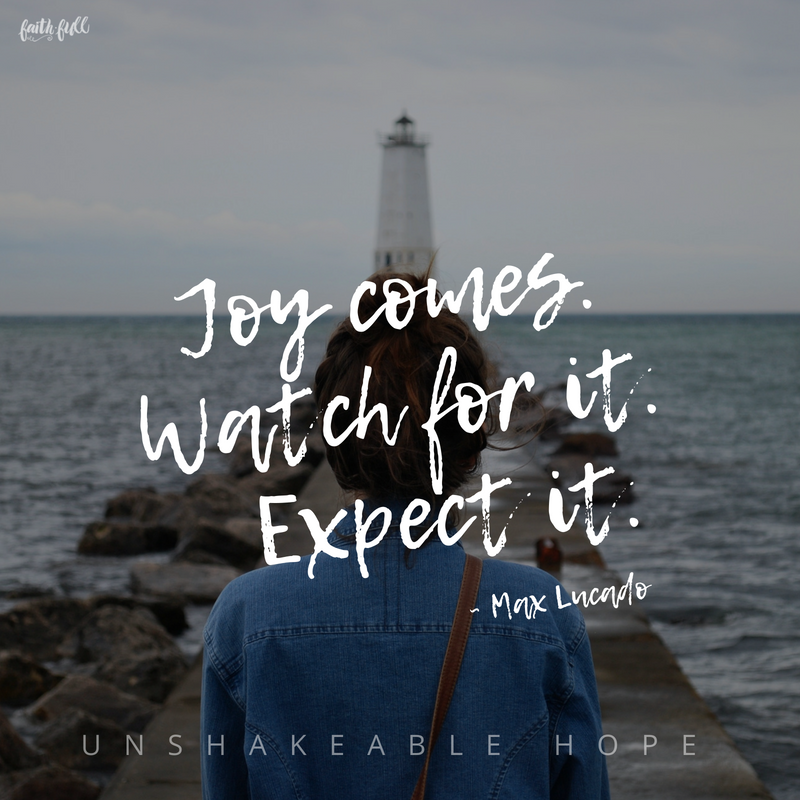 Weeping may last through the night, but joy comes with the morning. — Psalm 30:5 NLT

Amanda Todd was the Canadian teenager who became an unwitting spokesperson for despair at the age of fifteen after a predator had convinced her to pose topless for a photo. He later blackmailed her with threats to circulate the picture if she didn’t reveal more, but he posted the photo anyway. Humiliation rained down on her like a summer squall. From the high school hallway to the Internet highway, she became the laughingstock of her circle.

Already a fragile and private person, she retreated even further. She avoided friends, stayed home. Still, she couldn’t escape the texts, calls, and stares. The family changed schools, but the mockery followed. For three years she was stalked and taunted. She descended into drugs and alcohol. She cut herself. She hid in her room. She drank bleach and tried to take her life. Finally, in an act of desperation, she posted a nine-minute video on YouTube. Using flash cards set to a maudlin song, she recounted her months of horror: the shame she brought on her family, the pain she brought on herself. The video image shows only the lower half of her face and the written messages.

I have nobody.  I need someone.  My name is Amanda Todd.

A month after posting the video, she attempted suicide again. This time she succeeded.1

If hope were a rain cloud, Amanda Todd lived in the Sahara desert.

She searched the skies for a reason to live and found none. Does God have a promise for someone like her?

Anyone can give pep talks, but if God is who He claims to be, He sure as shootin’ better have a word for the despondent. Self-help manuals might get you through a bad mood or a tough patch. But what about an abusive childhood or a debilitating accident or years of chronic pain or public ridicule?

Does God have a word for the dark nights of the soul?

He does. The promise begins with this phrase:

Weeping may last through the night… — Psalm 30:5 NLT

This is not new news to you.

But this may be:

Despair will not rule the day. Sorrow will not last forever. The clouds may eclipse the sun, but they cannot eliminate it. Night might delay the dawn, but it cannot defeat it. Morning comes. Not as quickly as we want. Not as dramatically as we desire. But morning comes, and with it comes joy.

Do you need this promise? Have you wept a river? Have you forsaken hope? Do you wonder if a morning will ever bring this night to an end? Mary Magdalene did.

In the forest of the New Testament, she is the weeping willow. She is the one upon whom tragedy cast its coldest winter. Before she knew Jesus, she had seven demons (Luke 8:2). She was a prisoner of seven afflictions. What might this list include? Depression? Loneliness? Shame? Fear? Perhaps she was a recluse or a prostitute. Maybe she’d been abused, abandoned. The number seven is sometimes used in the Bible to describe completeness. It could be that Mary Magdalene was completely consumed with troubles.

But then something happened. Jesus stepped into her world. He spoke and the demons fled. For the first time in a long time, the oppressive forces were gone. Banished. Evicted. Mary Magdalene could sleep well, eat enough, and smile again. The face in the mirror wasn’t anguished.

Jesus restored life to her life.

She reciprocated. She was among the female followers who “were contributing from their own resources to support Jesus and his disciples” (Luke 8:3 NLT). Wherever Jesus went, Mary Magdalene followed. She heard Him teach. She saw Him perform miracles. She helped pay expenses. She may have even prepared His meals. She was always near Christ.

When they pounded the nails in His hands, she heard the hammer. When they pierced His side with a spear, she saw the blood. When they lowered His body from the cross, she was there to help prepare it for burial.

On Friday Mary Magdalene watched Jesus die.  On Saturday she observed a sad Sabbath.  When Sunday came, Mary Magdalene went to the tomb to finish the work she had begun on Friday.

Early on the first day of the week, Mary Magdalene went to the tomb while it was still dark. — John 20:1 NCV

She knew nothing of the empty tomb. She came with no other motive than to wash the remaining clots of blood from His beard and say goodbye.

It was a dark morning.

When she arrived at the tomb, the bad news became worse. Mary Magdalene “saw that the stone had been taken away” (v. 1 NKJV). Assuming that grave robbers had taken the body, she hurried back down the trail until she found Peter and John.

Peter and John ran to the grave site. John was faster, but Peter was bolder. He stepped inside. John followed him. Peter saw the empty slab and stared. But John saw the empty slab and believed. The evidence all came together for him: the resurrection prophecies, the removed stone, the linen wrappings, the head cloth folded and placed. John did the math. No one took Jesus’ body. No one robbed the grave. Jesus rose from the dead. John looked and believed. Easter had its first celebrant.

Peter and John hurried to tell the others. We expect the camera lens of the gospel to follow them. After all, they were apostles, future authors of epistles. They compose two-thirds of the inner circle. We expect John to describe what the apostles did next. He doesn’t. He tells the story of the one who remained behind.

But Mary stood outside by the tomb weeping. — John 20:11 NKJV

Her face was awash with tears. Her shoulders heaved with sobs. She felt all alone. It was just Mary Magdalene, her despair, and a vacant tomb.

As she wept she stooped down and looked into the tomb. And she saw two angels in white sitting, one at the head and the other at the feet, where the body of Jesus had lain. Then they said to her, ‘Woman, why are you weeping?’ — John 20:11–13 NKJV

Mary Magdalene mistook the angels for men. It’s easy to imagine why. It was still dark outside, even darker in the tomb. Her eyes were tear filled. She had no reason to think angels would be in the tomb. Bone diggers? Maybe. Caretakers? Possibly. But her Sunday was too dark to expect the presence of angels.

They have taken away my Lord, and I do not know where they have laid Him. — John 20:13 NKJV

Mary’s world had officially hit rock bottom. Her master murdered. His body buried in a borrowed grave. His tomb robbed. His body stolen. Now two strangers were sitting on the slab where His body had been laid. Sorrow intermingled with anger.

Have you ever had a moment like this? A moment in which bad news became worse? In which sadness wrapped around you like a fog? In which you came looking for God yet couldn’t find Him?

Maybe Mary Magdalene’s story is your story. If so, you’re going to love what happened next. In the midst of Mary’s darkest moment, the Son came out.

Now when she had said this, she turned around and saw Jesus standing there, and did not know that it was Jesus. Jesus said to her,

“Woman, why are you weeping? Whom are you seeking?” She, supposing Him to be the gardener, said to Him, “Sir, if You have carried Him away, tell me where You have laid Him, and I will take Him away.” — John 20:14-15 NKJV

She didn’t recognize her Lord. So Jesus did something about it. He called her by name.

Maybe it was the way He said it. The inflection. The tone. The Galilean accent. Maybe it was the memory associated with it, the moment she first heard someone say her name unladen with perversion or an agenda.

When she heard Him call her by name, she knew the source.

In a second. In a pivot of the neck. In the amount of time it took her to rotate her head from this way to that, her world went from a dead Jesus to a living one. Weeping may last through the night, but joy…

She took hold of Him. We know this to be true because of the next words Jesus said:

Maybe she fell at His feet and held His ankles.

Maybe she threw her arms around His shoulders and held Him close.

We don’t know how she held Him. We just know she did.

And Jesus let her do so. Even if the gesture lasted for only a moment, Jesus allowed it. How wonderful that the resurrected Lord was not too holy, too otherly, too divine, too supernatural to be touched.

This moment serves a sacred role in the Easter story. It, at once, reminds us that Jesus is the conquering King and the Good Shepherd. He has power over death. But He also has a soft spot for the Mary Magdalenes of the world. The regal hero is relentlessly tender.

I wish I could paint this scene. Capture it in oil on canvas and frame it. The brilliant golden sunrise. The open tomb. Angels watching from a distance. The white-robed Messiah. The joy-filled Mary. Her hands extended to Him. His eyes upon her. If you are an artist and paint it, please include the reflection of the sunrise in the tears of Mary. And, by all means, paint a broad smile on the face of Jesus.

Joy comes. Watch for it. Expect it as you would the morning sunrise or the evening twilight. It came to Mary Magdalene. And it will come to you, my friend.

Keep coming to Jesus. Even though the trail is dark. Even though the sun seems to sleep. Even though everyone else is silent, walk to Jesus. Mary Magdalene did this. No, she didn’t comprehend the promise of Jesus. She came looking for a dead Jesus, not a living one. But at least she came. And because she came to Him, He came to her.

And you? You’ll be tempted to give up and walk away. But don’t. Even when you don’t feel like it, keep walking the trail to the empty tomb. Open your Bible. Meditate on Scripture. Sing hymns. Talk to other believers. Place yourself in a position to be found by Jesus, and listen carefully. That gardener very well might be your Redeemer.

Hear from Max about Unshakable Hope

Joy comes with the morning… Even in the middle of the night, this truth is still solid. Joy will come. Possibly not now, but crying will not last forever. If this is you, will you let us pray for you? And, maybe you can stand up, raise a hand of praise, and testify because Jesus did come and wipe away your tears. If so, please share your story with us. We want to hear! ~ Laurie McClure, Faith.Full