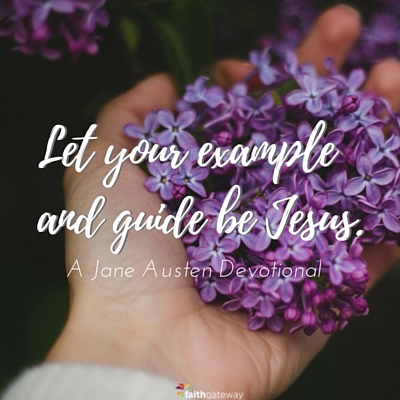 Editor’s Note: Today’s devotional is excerpted from A Jane Austen Devotional, beginning with this selection from Pride and Prejudice.

Mr. Bingley was good looking and gentlemanlike; he had a pleasant countenance and easy, unaffected manners. His brother-in-law, Mr. Hurst, merely looked the gentleman; but his friend Mr. Darcy soon drew the attention of the room by his fine, tall person, handsome features, noble mien; and the report which was in general circulation within five minutes after his entrance, of his having ten thousand a year. The gentlemen pronounced him to be a fine figure of a man, the ladies declared he was much handsomer than Mr. Bingley, and he was looked at with great admiration for about half the evening, till his manners gave a disgust which turned the tide of his popularity; for he was discovered to be proud, to be above his company, and above being pleased; and not all his large estate in Derbyshire could then save him from having a most forbidding, disagreeable countenance, and being unworthy to be compared with his friend.

Mr. Bingley had soon made himself acquainted with all the principal people in the room; he was lively and unreserved, danced every dance, was angry that the ball closed so early, and talked of giving one himself at Netherfield. Such amiable qualities must speak for themselves. What a contrast between him and his friend! Mr. Darcy danced only once with Mrs. Hurst and once with Miss Bingley, declined being introduced to any other lady, and spent the rest of the evening in walking about the room, speaking occasionally to one of his own party. His character was decided. He was the proudest, most disagreeable man in the world, and every body hoped that he would never come there again. Amongst the most violent against him was Mrs. Bennet, whose dislike of his general behaviour was sharpened into particular resentment by his having slighted one of her daughters. — Pride and Prejudice

Two wealthy gentlemen enter the picture early in Pride and Prejudice: Mr. Bingley, pleasant and friendly; Mr. Darcy, handsome and aloof. Though Darcy is at first spoken of in hushed tones for his handsomeness and wealth, his disdainful attitude toward everyone at the ball becomes evident, and the opinion spreads like wildfire that he is “the proudest, most disagreeable man in the world.”

How fitting that of all who are repulsed by his behavior, it is Mrs. Bennet who takes the greatest offense — because Darcy slighted one of her daughters. Darcy’s character is quickly stamped with the seal of Pride. This all-too-human tendency to judge others in haste — to form a “prejudice” based not upon fact but on superficial observation — is one of the central themes of the novel. While Mrs. Bennet is clearly guilty of rash judgment, Darcy and even Elizabeth also commit the same offense.

The real problem in criticizing and judging others is that it blinds us to our own sin by keeping us focused on others’ shortcomings. This ultimately prevents us from right relationship with Christ.

Examine yourselves as to whether you are in the faith. Test yourselves. Do you not know yourselves that Jesus Christ is in you? — 2 Corinthians 13:5 (NKJV)

The next time you find yourself judging another, be quick to first examine your own heart and behavior. Weed out the sin you find there first. Let your example and guide be Jesus, who always demonstrated a pure and humble heart toward others.

Put on the new man which was created according to God, in true righteousness and holiness. — Ephesians 4:24 (NKJV)

Join the conversation about judging others on our blog! We believers want a right relationship with Jesus, so we must quit criticizing. It’s not the way Jesus calls us to behave — He calls us to love instead. We’d love to hear your thoughts. ~ Devotionals Daily