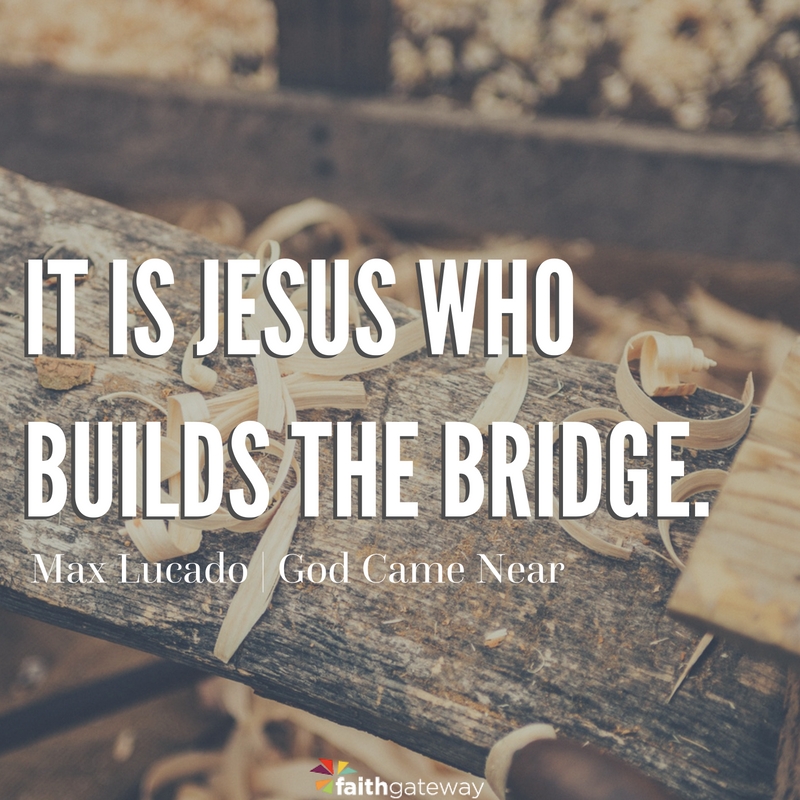 Many of the names in the Bible that refer to our Lord are nothing less than palatial and august: Son of God, The Lamb of God, The Light of the World, The Resurrection and the Life, The Bright and Morning Star, He that Should Come, Alpha and Omega.

They are phrases that stretch the boundaries of human language in an effort to capture the uncapturable, the grandeur of God. And try as they might to draw as near as they may, they always fall short. Hearing them is somewhat like hearing a Salvation Army Christmas band on the street corner play Handel’s Messiah. Good try, but it doesn’t work. The message is too majestic for the medium. And such it is with language.

The phrase “There are no words to express…” is really the only one that can honestly be applied to God. No names do Him justice.

But there is one name which recalls a quality of the Master that bewildered and compelled those who knew Him. It reveals a side of Him that, when recognized, is enough to make you fall on your face.

It is not too small, nor is it too grand. It is a name that fits like the shoe fit Cinderella’s foot.

In the gospels it’s His most common name — used almost six hundred times. And a common name it was. Jesus is the Greek form of Joshua, Jeshua, and Jehoshua — all familiar Old Testament names. There were at least five high priests known as Jesus. The writings of the historian Josephus refer to about twenty people called Jesus. The New Testament speaks of Jesus Justus, the friend of Paul,1 and the sorcerer of Paphos is called Bar-Jesus.2 Some manuscripts give Jesus as the first name of Barabbas. “Which would you like me to release to you — Jesus Barabbas or Jesus called the Messiah?”3

What’s the point? Jesus could have been a “Joe.”

If Jesus came today, His name might have been John or Bob or Jim.

Were He here today, it is doubtful He would distance Himself with a lofty name like Reverend Holiness Angelic Divinity III. No, when God chose the name His Son would carry, He chose a human name.4 He chose a name so typical that it would appear two or three times on any given class roll.

“The Word became flesh,” John said, in other words.

He was touchable, approachable, reachable. And, what’s more, He was ordinary. If He were here today, you probably wouldn’t notice Him as He walked through a shopping mall. He wouldn’t turn heads by the clothes He wore or the jewelry He flashed.

“Just call me Jesus,” you can almost hear Him say.

He was the kind of fellow you’d invite to watch the Rams-Giants game at your house. He’d wrestle on the floor with your kids, doze on your couch, and cook steaks on your grill. He’d laugh at your jokes and tell a few of His own. And when you spoke, He’d listen to you as if He had all the time in eternity.

And one thing’s for sure, you’d invite Him back.

It is worth noting that those who knew Him best remembered Him as Jesus.  The titles Jesus Christ and Lord Jesus are seen only six times. Those who walked with Him remembered Him not with a title or designation, but with a name — Jesus.

Think about the implications. When God chose to reveal Himself to mankind, what medium did He use? A book? No, that was secondary. A church? No. That was consequential. A moral code? No. To limit God’s revelation to a cold list of dos and don’ts is as tragic as looking at a Colorado road map and saying that you’d seen the Rockies.

When God chose to reveal Himself, He did so (surprise of surprises) through a human body. The tongue that called forth the dead was a human one. The hand that touched the leper had dirt under its nails. The feet upon which the woman wept were calloused and dusty. And His tears… oh, don’t miss the tears… they came from a heart as broken as yours or mine ever has been.

For we do not have a high priest who is unable to sympathize with our weaknesses. — Hebrews 4:15

So, people came to Him. My, how they came to Him! They came at night; they touched Him as He walked down the street; they followed Him around the sea; they invited Him into their homes and placed their children at His feet. Why? Because He refused to be a statue in a cathedral or a priest in an elevated pulpit. He chose instead to be Jesus.

Remember that the next time you find yourself amazed at your own failures.

Or the next time acidic accusations burn holes in your soul.

Or the next time you see a cold cathedral or hear a lifeless liturgy.

Remember. It is man who creates the distance. It is Jesus who builds the bridge.

What do you think about Jesus coming to earth as an average Joe? Approachable, reachable, ordinary, and likable. Do you know that Jesus doesn’t reject you? Come share your thoughts with us on our blog! We want to hear from you! ~ Devotionals Daily