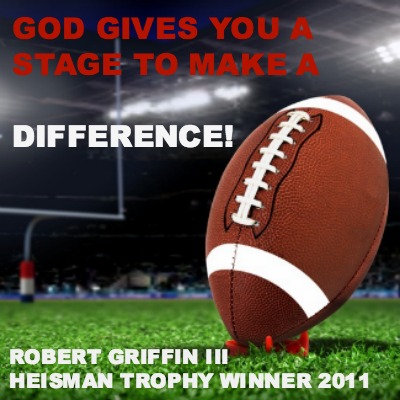 To some, “Just Do It” is a catchy phrase for a sports apparel company. To Robert Griffin III, that phrase has more meaning and purpose.

When it was announced that Robert Griffin III was the 2011 Heisman Trophy winner, Baylor fans erupted in cheers of great joy. The man known as “RG3” is the first Heisman winner in Baylor history. In leading Baylor to its first nine-win season since 1986, RG3 threw passes for a new school record of 3,998 yards and 36 touchdowns. He also rushed for 644 yards with 9 touchdowns.

After ESPN pundits have called him “the Most Interesting Man in College Football.”  A model student-athlete and an obedient, loyal son, RG3 is one of the truly great stories to come out of football in the past decade.

Robert is the youngest of three children whose parents were both Army officers serving overseas. The discipline and commitment to excellence modeled by his loving parents set the stage for his faith, ideals, and family values and contributed to the development of his great character.

When Robert’s dad, Robert II, was suddenly deployed to Iraq on the eve of his well-deserved retirement from the Army, it set in motion a series of events that pushed RG3 to become a great student-athlete. Some people take the lemons life gives them and cry over them – others find a way to make some sweet lemonade, which seemed to be the standard RG3 applied to his father’s deployment.

The discipline of working hard and studying well prepared RG3 for the task of leading the Baylor Bears in their quest to become a top-ranked team.

Robert’s practices and study of the game became a model for other aspiring athletes. It was reported that RG3 probably studied more film than most of the coaches. His dad taught him to deal with the unexpected and to prepare himself fully for the challenges life brings. Many of the drills his father invoked challenged RG3 to think outside the box and develop a calm instinct to alarming situations.

Somehow throughout all of this RG3 endeavors to keep a perspective by pointing to heaven after each touchdown. Unlike some high-profile athletes who forget about others, his work with organizations like Friends for Life, which assists seniors and adults with disabilities, and as a coach for kids associated with the Special Olympics helps Robert remain humble and appreciative of God’s blessings on his life.

At a time in our culture when most athletes are trying to compete for time in the spotlight, Robert shines it on God, his family, teammates, and coaches. “[God] gives you a stage to make a difference and not to just talk about yourself, but lift Him up. There are a lot of different types of Christians everywhere, but my biggest thing is it’s not our job to judge; it’s just our job to go out, praise Him, let people know what He’s doing, and let people follow if they want to.”

Upon reflecting on his faith RG3 also states,

I praise God, I thank Him for everything. Purposefully, you live every day for Him, and when He gives you the opportunity to speak up for Him or to do something in His name, you do it.

Robert Griffin III is off to a great start with the Washington Redskins as their starting quarterback. In his first NFL game, Griffin led the Redskins to a 40–32 victory over the New Orleans Saints and was named the NFC’s “Offensive Player of the Week” – the first time a rookie quarterback had ever received that honor for a debut game. But I’d say he’s off to an even greater start in the game of life. I think he knows that bringing honor to God in whatever you do is a real privilege. You too can be the “player of the week” as a respected husband, dad, mom, friend, coworker, or neighbor.

Each day we take in breath we can choose to honor or dishonor the One who gave us life.

Like RG3, when striving to be a disciple of Christ, we must remember three important things:

Just do it! Join the conversation on our blog! We would love to hear from you about making a difference for Christ! ~ Devotionals Daily 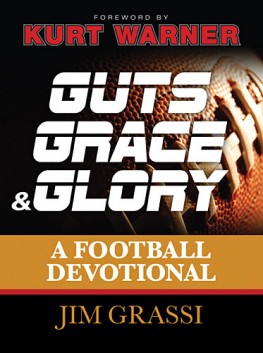