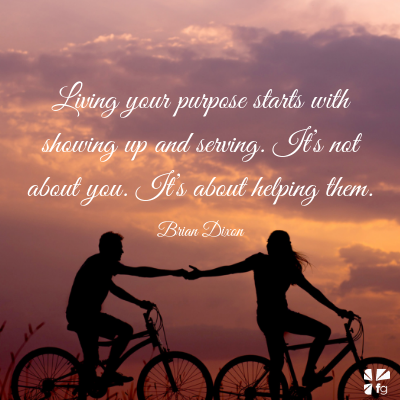 Jesus called them together and said, “You know that the rulers of the Gentiles lord it over them, and their high officials exercise authority over them. Not so with you. Instead, whoever wants to become great among you must be your servant, and whoever wants to be first must be your slave — just as the Son of Man did not come to be served, but to serve, and to give His life as a ransom for many.” —Matthew 20:25-28

I’ll never forget the voicemail I received from my friend Scott on a Thursday afternoon. “Hey, Brian, unfortunately, I’m going to have to cancel our lunch tomorrow. I’ll be in a recording session with Larry.” It was the greatest rejection voicemail I’ve ever received. But for you to understand that, you would need to know a little bit about Scott, Larry, and what they were recording.

Scott’s dream was to be a composer. More specific, he wanted to write the music you hear in movies. He had a dream to create epic film scores, writing and recording every note that plays during the battle scene of a blockbuster movie. He had the right gear and training but no way to get his foot in the door of this highly competitive industry.

Julie and I met Scott when we moved to San Diego. We were living in a tiny apartment near the beach, and Scott was our next-door neighbor. I think he sold insurance at the time. Then one day, I saw him carrying an enormous keyboard from his tiny hatchback car up the two flights of stairs to his apartment. I held the door open for him and caught a glimpse of his dream. His tiny one-bedroom apartment had been transformed into a state-of-the-art recording studio. He had all of the equipment to create the music for an Academy Award–winning film. But there was only one problem. Scott couldn’t get anyone to listen to his demo.

Each morning, I’d see lifeless Scott, briefcase in hand, heading off to fight the San Diego traffic, trudging to a job he despised.

Julie and I moved a few towns away and lost touch with Scott. A few years passed. Then one night, I just happened to run into Scott at a gas station. We made plans to grab lunch on a Friday. There was a spark in his eye that I hadn’t seen before. A few days later, I received the voicemail canceling our plans. As it turns out, Scott hadn’t given up on his dream. To his credit, he had tried all of the traditional ways to get his foot in the door as a composer. He submitted his demo CD, he applied for independent productions, he worked for free just to build his resume, but nothing was leading to his dream.

He was browsing the website of Larry, a well-known film composer living in San Diego, when he noticed a spelling error. Then, in the next paragraph, another one. Scott began to make a list of all the spelling and grammatical errors on the website. Now, granted, as a classically trained composer, Scott paid meticulous attention to details, so he felt compelled to do something. From a heart of service, he drafted a short email to the contact link on Larry’s website, outlining the errors and suggested fixes.

And that’s where the story usually ends. Except things didn’t end there for Scott. They were just beginning. Less than five minutes after Scott sent that email, his phone rang. It was Larry.

“Scott. Thanks for your advice on my website. I forwarded your email to my team to fix the site. By the way, your website mentioned you have experience with this new composing software program. I’m wondering if you could come by the studio and give me a tutorial.”

Scott was speechless. All he could muster in response was, “Sounds great. See you soon.” Thirty minutes later, he was standing in the composer’s oceanfront studio, helping him learn the latest version of a software program that Scott knew inside and out.

Over the next few years, this relationship blossomed. Scott is now a full-time composer in Hollywood, living his dream and improving moviegoers’ experiences across the world. You see, all of the traditional means of getting noticed didn’t work for Scott. None of them led him closer to his dream. The key that finally opened the locked door to his profitable purpose was a heart of service. To get ahead, you need to show up and serve.

Showing up and serving is the best way to get the raise you’ve been longing for, increase sales of your existing product, or finally land your dream job. Get your foot in the door by offering to hold the door open for other people. This is the secret key to building relationships with influencers.

Living your purpose starts with showing up and serving. It’s not about you. It’s about helping them.

Imagine if you could look at your life and work on being on a mission for people. Imagine if your goal were to make their day and to help them win the day. Not only would your life be fulfilling, but you would be rewarded for your efforts. Your company would grow, you would get promoted, and you would feel a sense of fulfillment far beyond anything you’ve experienced before.

Be on a mission for people. When you are on a mission, even the most mundane task has a weighty level of importance. Delivering a meal to a family who just had a baby, pumping gas for an ambulance, or setting up an internet connection so a dying family member can make a video call to their loved ones one last time. Your contribution is monumental when the stakes are high.

Don’t have any connections? Show up and serve.

Tired of the job hunt? Show up and serve.

Can’t get anyone on the phone? Show up and serve.

Showing up and serving will open up new opportunities and make a massive difference in your life and in the lives of others.

Adapted for Devotionals Daily from Start with Your People: The Daily Decision that Changes Everything by Brian Dixon, copyright Brian Dixon.