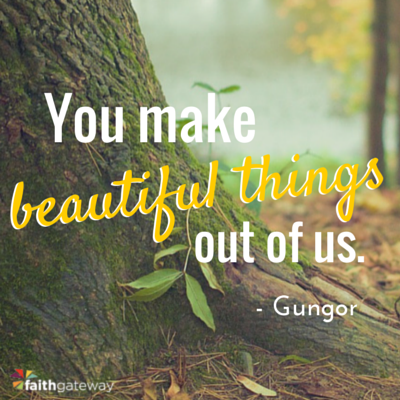 As committed as our team is to creating churches for unchurched people, we still have to fight the pull toward becoming a church for church people. Honestly, I don’t understand why every church wouldn’t determine to become a church unchurched people loved to attend.

Nothing brings this conviction into sharper focus for me than baptism. As I mentioned in chapter four, to be baptized in our churches, candidates have to allow us to record a three-to-four minute video describing their faith journeys. We show these videos in our worship services just before individuals are baptized. Week after week, I sit and listen to people of all ages share their stories of how they connected with their heavenly Father as a result of getting connected to church.21 I’m sure you have stories of your own. I don’t share these by way of comparison. It’s just that stories like these are the bull’s-eye on the target for us. It’s why we exist.

I’ll never forget Allen’s story. He grew up with a single mom who worked three jobs to keep the family afloat. He stopped attending church as soon as he could. When his mother contracted cancer and died, he became very angry with God. His words were, “I couldn’t understand how He could let her work so hard and never have anything for herself and die at the age of forty-one. For the next twenty years I lived a very destructive life.” It was Allen’s wife who eventually persuaded him to attend North Point. He described it this way, “I sat in rows here at North Point for over six years just to make her happy. Then suddenly the messages started making sense.” Allen still had a lot of questions, so he joined a Starting Point22 group as well as a couple’s group. “Eventually all my dots connected and I truly got it for the first time.” Allen said that when he accepted Christ as his Savior, he cried the entire day.

Then there was my friend Nancy. Nancy began attending because we hired her husband to play in one of our bands. Her story began like this: “I grew up in a Jewish household, the granddaughter of an orthodox cantor. I was bas mitzvahed at thirteen. My ex-husband was invited to play in the North Point band and thus my journey began. At first, I considered Andy’s preaching to be motivational speaking. Yet slowly my heart began to open to the message of the New Testament. It was in the sermon series The Star, the Cross, and the Crescent that I realized that Jesus was my Savior.” Nancy went on to thank the people God had brought into her life to facilitate her journey to faith. Then she concluded by saying, “Today I proudly and profoundly would like to say that I am Jewish, Jesus Christ is the Messiah, and He is my personal Lord and Savior.”

A few weeks earlier, a thirty-year-old woman began her baptism story this way: “I had always been told that because I was gay, God hated me and I was going to hell.” She went on to explain how she turned to alcohol at the age of fifteen to deal with her rejection. She continued, “I was a miserable lost person trying to find something to fill my emptiness.” But God brought someone into Jessie’s life who challenged her to get sober and begin attending church. After fifteen years of avoiding church, she said, “When I came to this church, I immediately felt at home.” I have to tell you, that statement was emotional for me. I imagined Jessie as a teenager carrying the secret of same-sex attraction compounded by the lie that she would never be acceptable to God, and then fifteen years later walking into one of our churches and feeling “immediately at home.” I don’t have words.

The turning point for Jessie came during a message preached by one of our associate pastors Rodney Anderson. She said, “During a message I heard Rodney say, ‘There’s a monumental difference in believing in God and believing God.’ That hit home. I had always believed in God but I had not believed God.” She went on to describe the transformation she experienced as a result of embracing God’s forgiveness, love, and grace. She concluded with this, “I have now filled my emptiness with the love of Jesus.”

That’s what happens when you decide to follow the apostle James’ advice. That’s what happens when you decide that under no circumstance will you do anything that makes it difficult for those who are turning to God. I could go on and on. And in case you visit us someday, you should know that in our churches, when someone comes up out of the water, we cheer. We celebrate. It’s not uncommon for friends to bring posters with the name of the person they’ve come to see baptized written in big bold letters. People throw confetti and ring bells. It’s awesome.

We take seriously Jesus’ words that “there will be more rejoicing in heaven over one sinner who repents than over ninety-nine righteous persons who do not need to repent” (Luke 15:7). We figure if heaven is celebrating, we should join in.

Pardon my naïveté or arrogance, but I think celebrations like the ones I just described should be the norm in every gathering that calls itself a church. From time to time I get notes from attendees thanking me for creating a church to which they can invite their neighbors and unchurched family members. As appreciative as I am, it still strikes me as odd that someone would have to thank a pastor for creating a church that is doing the very thing the church was created to do in the first place. Why should that be the exception and not the rule?

So we have our work cut out for us. But what an incredible work it is. We are privileged to be stewards of the church of our generation. God has seen fit to bless us with the responsibility to ensure that the twenty-first century church is a place where all kinds of people with all kinds of stuff can gather in Jesus’ name and find restoration, acceptance, and grace.

Music comes and goes a lot more quickly than it used to. We sang “Just As I Am” for decades. Currently, the song we sing that captures that same sense of transparency, restoration, and hope is Gungor’s song “Beautiful Things”:

Hope is springing up from this old ground

Out of chaos life is being found in You

You make beautiful things out of the dust

You make beautiful things out of us.

There it is. Another reference to the glorious mess from which God brings life. The church. So church leaders, let’s get out there and do what Jesus died to make possible. Let’s heed brother James’ advice. Let’s rid our churches of anything that makes it difficult for those who are turning to God. Let’s proclaim God’s liberating truth. Let’s create communities characterized by grace. Let’s get comfortable with the tension, the inconsistency, and the messiness that ensues.

Let’s be the church.

Excerpted with permission from Deep and Wide by Andy Stanley, copyright Zondervan.

Andy Stanley encourages us be the church. How can we cultivate a culture of grace in our churches? As we start a new year, let’s focus more on creating a welcoming environment for unchurched people and less on being a church for church people. Join the conversation on our blog! We’d love to hear from you!