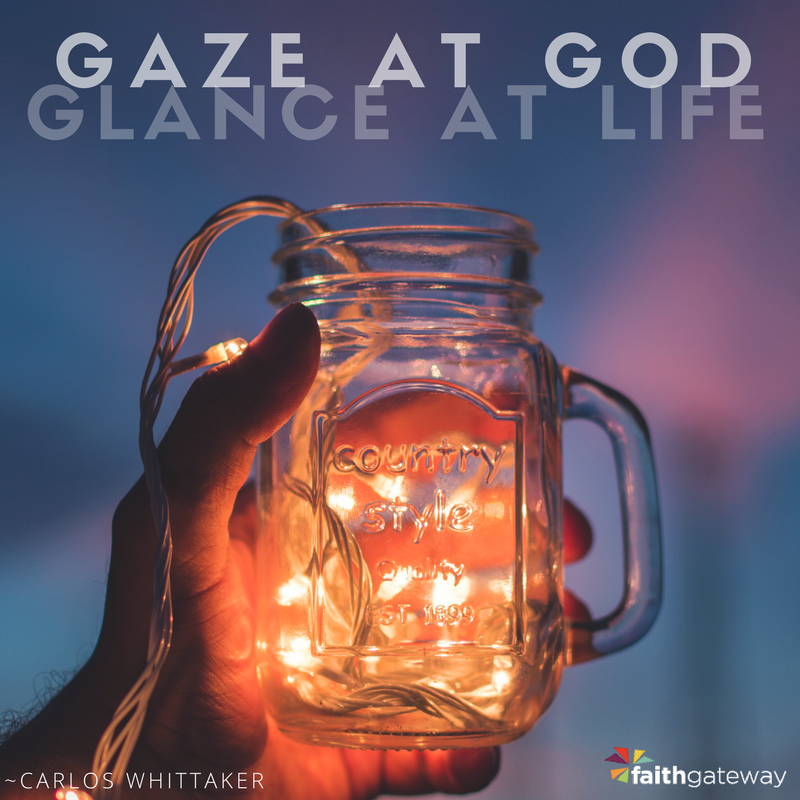 Editor’s Note: In Kill the Spider, Carlos Whittaker deals with problems, bad habits, harmful thought patters (cobwebs) all the way down to the root issue (spider) in order to finally kill it and find freedom in Jesus. In this excerpt, he shares about his experience at a week-long therapy camp.

Remember how I told my daughter Seanna how I was going to summer camp for adults? I didn’t know it at the time I said it, but it was true in more ways than one. For instance, we had a camp cook (chef). We had our camp counselors (therapists). We even had a sort of camp dad. When we showed up, Bill was quick to point out that once the staff went home for the night, there was a staff that would still be there for us at night. Maybe if we needed a hug or had a scary dream, I suppose? I thought this was a little funny. I’m a forty-year-old man. I think I’ll be okay. Our night staff was a man named Dex. Dex was the guy who took our phones on that first evening we were there, so I was already not fond of him. All I knew was that he was the guy who knew where Instagram was, and he wouldn’t let me go there. Dex was also in charge of the evening activities. One night was movie night. One night was game night. See, it is like camp for adults!

I loved this game. I always had. It wasn’t until I was three rounds in and destroying everyone in the game that something inside of me triggered. It hit me from the back without me even expecting it. I lost my breath and immediately got up and walked away.

“Carlos? You okay?” someone asked as I was almost running away. I didn’t reply. I just knew that I needed to stop playing that game. It had for some reason turned from being a fun game into a game highlighting one of my biggest childhood wounds.

It was a game in which the biggest liar was the biggest winner. And it sucked the breath right out of me.

I was sobbing on a stump next to the horse fence behind my cabin for several minutes when I heard footsteps. I tried to pull it together. I’m an ugly crier.

The man who took my phone from me.

“Yeah. I’m fine. I just got overwhelmed for some reason. Just needed a break,” I replied.

“You know there is never just ‘some reason.’ Wanna talk about it?” Dex replied.

The last thing I wanted to do was therapy on game night. Especially therapy from a guy who’s not a therapist. Dex was just the night-watch guy. I’m sure his job was simply to make sure that none of us snuck away in the middle of the night to smoke or something.

“I’m okay, man. Thanks for checking in,” I answered. Dex began to walk away. The truth? I was farther from okay than I had been the entire three days I’d been at OnSite. A board game suddenly triggered something inside of me that I didn’t like. The truth was that I was good at Balderdash because I am a good liar. The truth was that I did need to talk to Dex at that moment.

“Dex! Can you come here, man? I’m actually not okay.” I yelled out. But he was too far away to hear me now. I was gonna have to get off my butt and walk to Dex. That may seem like nothing, like the easy thing to do. But if you have ever been only a few feet from help and not felt the strength to go get it, you understand. Sometimes when help was staring you in the face, and you rejected it, you have to get up and go get it. And so I did.

Dex didn’t bat an eyelash when I asked to talk. And honestly, there was something about him not being a therapist that made it a little easier.

“It’s not just you,” he said. And then he sat still just staring at me. As if those four words were supposed to fix me. “Look around. Do you see what’s going on here? All of them. All of your new friends feel like frauds too. And you know the good news? None of you are. None of us are. We all know right from wrong. And we all feel like we choose wrong more than we choose right. But just because you are good at Balderdash, Carlos, doesn’t make you a fraud.” I was stunned. It wasn’t the most enlightening conversation I have had in my life. It wasn’t laced with tweetable quotes. But it was true. And for some reason, when I looked around at everyone gathered around the tables with board games on them, I suddenly saw it. I saw humanity for what it is. A bunch of imperfect people trying their best to live a good life and make good decisions. And it gave me breath. As it should you.

Sometimes, on some issues, we operate in grey areas, but the majority of us have no trouble discerning the difference between right and wrong. There is something deep inside a human being that allows us to differentiate good and bad. We intrinsically know because we all have the fabric of the King of Kings woven inside of us. God Himself created each and every one of us, and I believe that is why, even when we don’t know Jesus, we are able to make those judgments.

So why is it that we cannot freaking stop doing bad?

Why is it that yesterday, when driving past that homeless man, I knew in my heart I should have talked to him, but I didn’t? Why is it that when my wife drove up with a minivan filled with groceries that needed to be carried in, I sat on my phone watching a show, hoping she would bring them up all alone and not bother me for help? (Obviously, that didn’t go down as I was hoping.)

The struggle is real.

But the struggle isn’t always massive. Wanting to watch another episode of Stranger Things on my iPhone instead of helping Heather with the groceries isn’t a massive moral failure, but it is a selfish choice.

For I do not understand what I am doing, because I do not practice what I want to do, but I do what I hate. Now if I do what I do not want to do, I agree with the law that it is good. So now I am no longer the one doing it, but it is sin living in me.

That is a lot of dos and don’ts and want to dos but can’ts. It’s almost too much. At first glance, it would seem as though Paul is telling us — in the most eloquent way possible — we are screwed. The Carlos translation reads this way:

I’m so confused. Why in the world can’t I do what I know is right, and why am I always doing what is wrong? Relax. It’s not you. It’s sin. But does that mean I can just chalk this up to, “Oh, well, I guess I’m just gonna sin forever”? I want to do good. I feel that deep inside. But lookie there. I just chose bad again. Ugh! I know God is inside of me, but I also know that sin is inside of me. And so continues the freaking battle.

I know. Somebody please nominate me for Bible translator of the year.

Thank you, Jesus. And my translation: Gaze at God. Glance at life. That’s it. We are all going to have this battle raging inside of our hearts. We are all going to have to face this battle between flesh and spirit on a daily basis. But instead of staring straight into the face of flesh, look up. Stare up. Gaze up. When you do that, “He who raised Christ from the dead will also bring your mortal bodies to life through His Spirit who lives in you.”

What Secrets Are You Keeping?

Let’s start replacing some of the overwhelming lies in your life. The lie that I was a fraud and only capable of doing good every once in a while was more massive than I could even imagine. But that’s just it. It’s a lie. And all it took was some quick contemplation.

What secrets are you keeping? What spider is lurking that Jesus wants to draw out and kill so you can find freedom in Him? Come share with us on our blog. We would love to hear from you about getting rid of shame and condemnation and gazing at God instead! ~ Devotionals Daily