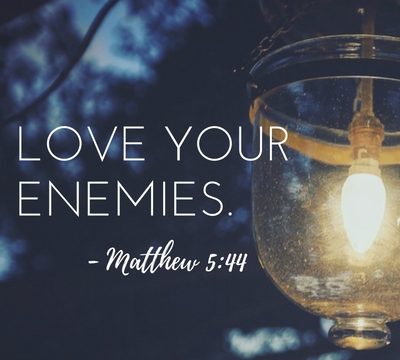 Let me tell you a story about Ronnie and Anita Smith. Ronnie, a young husband and father, had been out for a morning jog when gunmen in a black jeep targeted and killed him. The news reported that Ronnie had graduated from the University of Texas with a master’s degree and was teaching chemistry in Benghazi.

My ears pricked up: Benghazi was a highly unstable, war-torn city where militias held more power than the government. Why would anyone go there to teach? I had a hunch, but I wanted to investigate and find out more.

Fully aware of the danger, he and his wife moved their family to Libya in the immediate aftermath of its revolution, while the country was still in disarray. They considered the lives of their neighbors and students more important than their safety.

One of those students, Yomna Zentani, told reporters how Ronnie impacted her and other students. “After everything that happened in Libya, we were losing hope and he was the only one who was supporting us, motivating us, telling us that as long as we studied everything would be okay. He was the silver lining. He dedicated so much of his time for all his students. He chose to come here and help us, and to risk his life.”

What Could Have Motivated Ronnie?

Even as I write this, tears are overwhelming me. I think of great men like Ronnie Smith and have to ask myself, How did Ronnie become like this? How did this man become so loving and self-sacrificial that he was willing to move even his family into danger to serve those who could never give him anything in return? Thankfully, I do not have to wonder. It turns out that Ronnie, in his response to a survey a few years before his death, recommended a sermon by John Piper titled, Doing Missions When Dying Is Gain.

Quoting Hebrews 13:13 (NIV), “Let us, then, go to him outside the camp, bearing the disgrace he bore,” Piper spends over half his sermon explaining that Christians who are called to follow Jesus have to be ready to suffer for the sake of the world. He shares stories of martyr after martyr who followed Jesus in reaching the world with his love. While studying the sermon, one example took my breath away in light of Ronnie’s death: Piper spoke of Raymond Lull, a Christian who traveled to North Africa knowing he could be martyred for proclaiming the gospel to Muslims. As soon as Lull started preaching in Algeria, he was stoned to death. To this, Piper said, “What a way to go!”

This is the teaching that motivated Ronnie Smith and made him into the great man who served Libyans unto death:

Jesus intends for us to follow Him by reaching the world with His love, even if it kills us.

When we consider the message of the gospel, all the pieces fall in place. God did not just tell us to love sacrificially; He is our Lord and exemplar, and so He first did it for us.

The Creator of the universe, God, surrounded by angels and worshiped in unimaginable glory, was willing to lower Himself into this world and suffer for people so they could be saved and know His love. If He is the example for Christians, then Christians must be willing to leave any comfort and go anywhere so that people can know God’s love and be saved.

God was willing to suffer for people who sinned against Him, people who used the hands He gave them to crucify Him. Not only did He tell His followers,

Love your enemies and pray for those who persecute you. — Matthew 5:44 NIV,

He exemplified it. If He is the example for Christians, then Christians must be willing to self-sacrificially serve even their enemies, knowing full well that they may be killed for it.

The reason why Christians can follow Jesus boldly into death is because we are not worried about trying to save ourselves. The gospel is that God has already promised us salvation through His infinite mercy and grace. Christians can follow Jesus and die for their enemies because the gospel promises and enacts salvation, taking away all fear of death. This frees us to love everyone, friend and foe, enabling us to live according to the image in which we were made, the image of a God who is love in his very essence.

The gospel calls us to live and love without holding back, according to the image of the triune God in which we have been made, enabling us to follow Jesus, our Lord and perfect example, even in the face of death.

Ronnie Smith knew all this well, and when he left this world, he left it an example of a true Christian.

How Did Ronnie’s Wife Respond?

One week after his murder, Ronnie’s wife Anita wrote an open letter to the men who killed him. Its message was so transcendent, so otherworldly, that it stunned the world. She did not mince words.

To his attackers: I love you and I forgive you.

How could I not? For Jesus taught us to “Love our enemies” — not to kill them or seek revenge. Jesus sacrificed His life out of love for the very people who killed Him, as well as for us today. His death and resurrection opened the door for us to walk on the straight path to God in peace and forgiveness. Because of what Jesus did, Ronnie is with Jesus in Paradise now. Jesus came not only to take us to Paradise when we die but also to bring peace and healing on this earth. Ronnie loved you because God loves you. Ronnie loved you because God loved him — not because Ronnie was so great, but because God is so great.

This is a forgiveness and a love that makes no sense, that is unlike anything in this world. But as evidenced by the media’s response, it is a love that captivates the world.

Ronnie’s death was the voice of a martyr testifying to the love of Christ, and Anita’s letter was his megaphone.

This love can change the world.

How can we show the world God’s love today? Right where we are, in our communities, at work, in our families, at school, in our cities? Come share your thoughts with us on our blog. We want to hear from you about sacrificial love! ~ Devotionals Daily