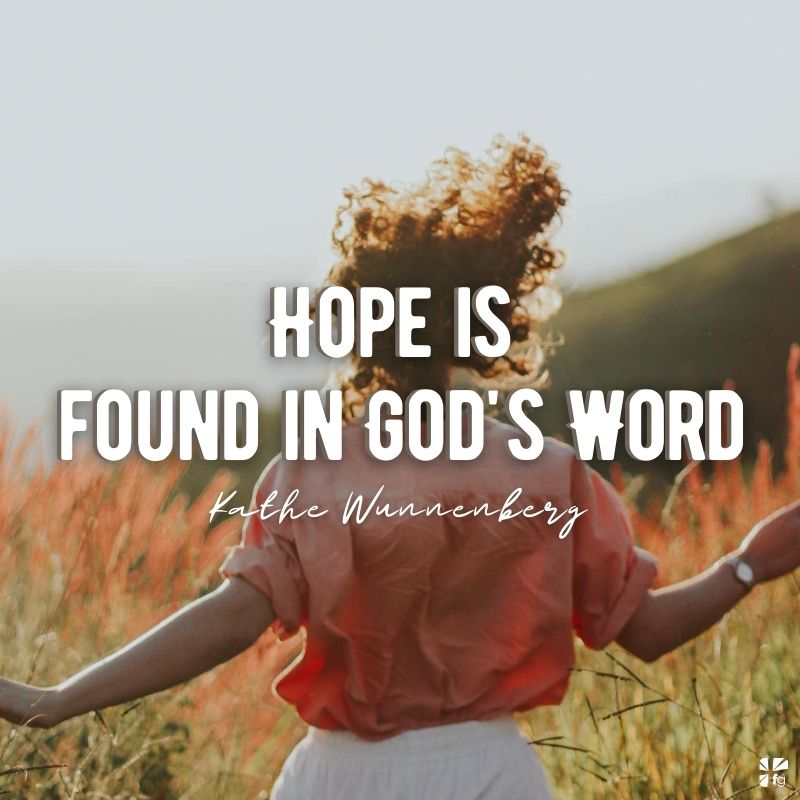 Guide me in your truth and teach me, for You are God my Savior, and my hope is in You all day long. — Psalm 25:5

I was running late to an appointment. To make matters worse, traffic on the freeway was stopped as far as I could see. I’ll never make it, I thought. Frustrated and feeling out of control, I looked up and saw the following words on a bumper sticker in front of me:

These timely words shouted truth to my anxious heart. They reminded me to look beyond my seemingly hopeless situation to the God of hope. During the next several minutes my car became a sanctuary where I communed with God, my Father and the giver of hope. I thanked God for loving me and caring about every concern in my life, even a traffic jam. To my surprise, I looked around and felt compassion for the other frustrated drivers. What hurts were they experiencing? What needs did they have? As I continued to wait, I prayed for them.

That day I experienced a fresh awareness that hurting people are all around us and opportunities abound daily for us to help others. But before reaching out, we need to first know the history of hope, what hope is, and the God of hope, to fully understand how to give it.

The first time hope is mentioned in the Bible is by Naomi, saying to her daughters-in-law that there was no hope of her having more sons. I can only imagine the deep sorrow Naomi must have felt after losing her husband, her two married sons, and her hope for future family. To her surprise her daughter-in-law Ruth chose to leave her family, worship Naomi’s God, and follow her to her homeland. What a precious gift of presence and personal sacrifice Ruth gave to Naomi. Two widows sojourning together, starting over in a new land. Guided by Naomi’s wisdom and coaching, Ruth was eventually blessed with a new husband and a son.

Can you picture the first time Naomi held her new grandson? As she touched his tiny fingers and counted his miniature toes, did she marvel at the miracle of hope birthed again in her heart? Was she giddy with excitement and awe? As she celebrated, the other women said,

Praise be to the Lord, who this day has not left you without a guardian-redeemer. May He become famous throughout Israel! He will renew your life and sustain you in your old age. For your daughter-in-law, who loves you and who is better to you than seven sons, has given him birth. — Ruth 4:14-15

Amazingly Naomi’s grandson became the grandfather of David, the king of Israel.

Can you think of a time in your past when a circumstance seemed hopeless, but God finally revealed his hope to you or through some- one? The story of Ruth and Naomi reminds us to trust God and know his hope even when circumstances appear to have no hope. While our story may at present appear hopeless, often later on we can look back on history (His Story!) and discover God’s plan at work in our lives during that time.

In the Old Testament, the word “hope” most often invites us to look ahead eagerly with trust and confident expectation. It also reminds us that the fulfillment of hope lies in the future. Lawrence Richards notes, “As the centuries drifted by, the prophets revealed more and more of God’s plan. The shape of the hoped-for future took on clearer and clearer form… Despite sharpening images of what was to take place in the near and distant future, the Old Testament never shifts from the conviction that relationship with God is the ultimate ground of hope. It is God Himself who is the hope of Israel (Jeremiah 14:8; Jeremiah 17:13). It is only by focusing our gaze on Him that we find a source of confidence and patience.”1

Hope is found in God’s Word. God trusted Moses with His words on the mountain. He wrote them down on stone tablets and presented them to the people as the Ten Commandments to guide the people in how to live. His Word, placed in the Ark of the Covenant, led the Israelites from slavery in Egypt, through the desert for forty years, and into the Promised Land. Multitudes still follow the Bible, God’s Word, and find hope, truth, joy, and guidance
for daily living.

Hope is not wishful thinking, but trusting God Himself and what He has promised.

Lawrence Richards points out, “Literally hundreds of times the phrase ‘the word of Yahweh’ is found in the Old Testament, and there are hundreds more that speak of God’s sending His Word to His people… The Old Testament shines with confidence that every word from God is both reliable and relevant.”2 The psalmist pours out his heart to remind us to find rest in God, seek Him, hope in Him, and put our hope in His Word. Listen to His words:

My soul faints with longing for Your salvation, but I have put my hope in Your Word. — Psalm 119:81

God’s Word spoken, read, or sung can change our mind-set, mood, and behavior. It teaches, corrects, admonishes, and encourages us. In a world of lies and deception, it points us to truth and absolutes.

These were not the words Job expected to hear from his wife (Job 2:9) during a time when he needed comfort and hope after losing his children, possessions, and health. Pain is personal and sometimes can bring out the fears and flaws in people. Hurt people often hurt people. Job’s wife was suffering too, yet her response to it was much different than her husband’s. Thankfully, Job ignored her words, yet I wonder if he ever forgot them. He was real and honest with his pain.

Life had lost all meaning for Job. What have I done to deserve what has happened? Job wondered. Tormented by doubts and uncertainties, Job cried out in anguish. Surely his closest friends would know how to offer him hope.

To his disappointment Job’s friends hurled insults, theology, and answers to why God was punishing him. They wrongfully accused and misunderstood Job. Suffering people need supportive friends who will validate their pain and simply offer the gift of presence and unconditional love. Do you remember a time when you needed support from a friend and they disappointed you?

I love Job’s persevering faith. Even though his wife and friends let him down, he continued to trust God.

Job’s longsuffering and patience endured through pain and uncertainty. When God finally spoke to Job, He did not humiliate or condemn him, but neither did He explain why He allowed Job to suffer. In talking with Job, God acknowledged Job’s righteousness, but at the same time God pointed Job toward His greatness and His mystery. Job did not know, as the reader does, that Job was a key figure in a battle between God and Satan, with Satan accusing Job of being righteous just because he was blessed. Job’s righteousness even in the midst of his suffering proved Satan wrong, and honored God.

Job’s life encourages us to trust in God even when we are suffering.

If we bow before Him, we can find hope in God’s greatness and goodness even when we cannot understand either our suffering or God Himself and what He is doing.

Like Job, we may be unaware of a spiritual battle going on behind the scenes, but we can rest in the hope that God is good, God is in control, and God has a purpose and a plan.

During an extreme season of personal and family suffering, I questioned why God would allow more painful circumstances in my life. I was dealing with parenting issues and a son’s health challenges shortly after persevering through the loss of a ministry, a major transition in our church, the death of a personal dream, and the death of our infant son. Overall, I believed I had “suffered well” and modeled a positive, authentic, hope-filled faith through every situation, allowing each experience to enlarge me and be used to help others. I was intentional about spreading hope and saw evidence of fruitfulness through a new ministry, three books, and many transformed people.

Why more suffering? I wondered.

Is a time of peace and calm too much to ask of God?

Like Job, I wrestled with tormenting thoughts and emotions.

Was I suffering from the consequences of my sin or bad decisions? Had I disobeyed or displeased God? Were spiritual forces targeting my family?

Physically exhausted from fighting doubt, uncertainty, and disappointment, I longed for rest and replenishment. I isolated myself from others, afraid to overburden them with the multiple challenges I was facing. I cried out to God. No explanation came. Yet, in the midst of His silence, He whispered His love through friends He sent to comfort me.

One friend whisked me away for twenty-four hours. Her carefully laid plans included a night’s stay at a friend’s home who was out of town. When we arrived she handed me a book on the twenty-third psalm, a journal, and a basket of my favorite things.

“Take a long, hot shower, relax, and spend time with God!” she said. Then she left me alone for the afternoon.

Unlike Job’s friends, who tried to give reasons for his suffering and hurled accusations at him, my friend comforted me by not asking questions. Instead of reprimanding me for not returning her phone calls, she served me. She planned a surprise game night with a group of friends, gave me laughter, and expected nothing in return.

A few days later another friend gave me an inspirational music CD with God’s Word. My soul soared with more hope as I listened and heard the melodious truth. Another friend handed me a red afghan to remind me that God is my comforter.

Looking back now I am convinced that God allowed me to suffer so He could display His warm sense of presence and love through friends. They made it bearable and pointed me to “Know Hope” again.

Where’s your hope today? Up? Down? Exhausted? Hanging on to the Lord no matter what? Maybe what you need is some rest, laughter, food, fun, and the Word to know hope again!