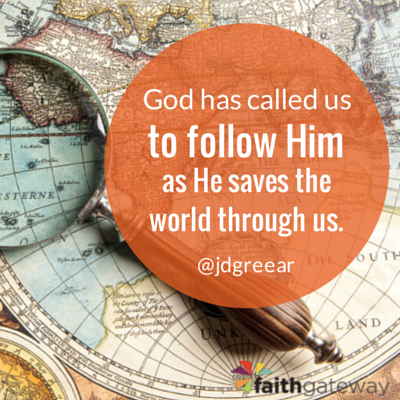 I have spent a lot of my Christian life feeling guilty over what I am not doing in the kingdom of God. It’s not that I am not committed to Jesus, living a sacrificial life, or intensely busy for the kingdom. I am – but there is just always so much more to be done, and sometimes I feel as if the needs of the world are crushing me.

I’ve found that many, if not most, committed Christians feel the same way. They’ve been told to be radical, full of “crazy love,” followers of Jesus rather than fans – and these are all true, needed messages. And yet many of us, after a really zealous start, end up down a radical path, feeling paralyzed by the weight of it all. So we toggle between summers of feverish activity and winters of guilt and fatigue.

We read Jesus’ words about the yoke being easy and the burden light, and we genuinely have no idea what He’s talking about. Discipleship feels like drudgery. I’ve counseled many of these weary believers in college groups and pastors’ circles, on the mission field, and in my office.

And as I said, I used to be one of them myself. No matter what I gave, there was always more that was needed. One more child to free from the sex trade… one more unreached people group to target… one more person to tell about Jesus!

How could I take my wife out to dinner with needs like that weighing on me? Or go on a vacation? In fact, how could I keep any money for my own enjoyment or pleasure when so many in the world die with nothing? If the price of a cup of coffee could really feed an Indian orphan for a week, was it right for me ever to have a cup of coffee? And why did I need a hot shower? Should I take only cold showers and free up another $20 a month in energy costs to house another refugee? John Wesley famously took down the pictures off of his wall, saying they were the “blood of the poor,” unnecessary indulgences while people starve. Was my indulgence of hot showers depriving some poor person of their next meal?

My wife and I own a fairly modest house, but couldn’t we have a smaller one? After all, my next door neighbors in Indonesia lived in a 400-square-foot, non-air-conditioned, aluminum-roofed hovel, and they were a family of ten. I don’t know anyone in America who lives that way, but my Indonesian neighbors survived… so wouldn’t truly “radical” living require that I live that way, too, and give the excess money to missions? Was my insistence on living like a first-world American, with a nice home (even if modest), condemning many to starvation and hell?

Is that how God wants us to think about life? If so, where does this kind of thinking stop?

If every person I see is headed either to Heaven or to hell, then shouldn’t I spend every minute of every day interrupting them to make sure they know how to get to God? Don’t they all need to know, right now? If it depends on me, shouldn’t I interrupt them, immediately?

The burden of such a conviction nearly crushed me. Ironically, however, the more I dwelt on the need, the less I felt motivated to do. I know that’s not the right reaction, but it seemed I had so little to offer in light of such great need – so why even start? Who wants to try to empty the ocean with a thimble?

My despair drove me to the Scriptures, and my despair eventually gave way to one of the most surprising insights I’ve ever had, one that has radically redefined how I see my service to Christ. This discovery turned drudgery and guilt into freedom and joy, and perhaps, ironically, has led to more generous living on my part than any resolve to “be radical” ever did.

Let me warn you, it’s completely counter-intuitive. Here it is:

It turns out that I had vastly overestimated what I had to contribute. I didn’t have “more” I needed to give; I actually had nothing God needed to begin with.

God is not now looking, nor has He ever looked, for “helpers” to assist Him in saving the world. That doesn’t mean He isn’t calling us to give ourselves generously to that mission or be sacrificially generous with our neighbors; it’s just that he’s not looking for people to supply his needs. He’s not short on money, talent, or time.

He has never commanded us to go save the world for Him; He has called us to follow Him as He saves the world through us.

God’s call to radical generosity begins with the good news that He doesn’t need us!

Are you weary? Lay your burden down. You don’t need to carry it! Leave your comments on our blog! We’d love to hear from you! ~ Devotionals Daily