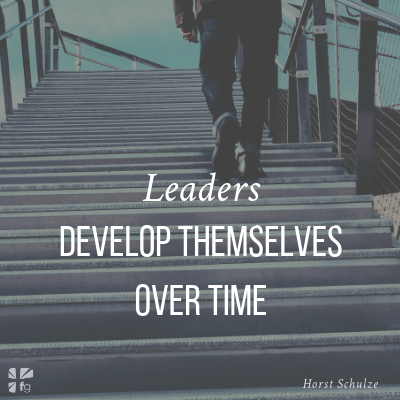 How many times have you heard someone say about a successful quarterback (or governor or pastor or entrepreneur), “They’re just a natural-born leader”?

A line from Shakespeare comes to mind. In the second act of Twelfth Night, the uptight antagonist Malvolio is handed a bogus letter supposedly from the woman he hopes to woo. There he reads, “Some are born great, some achieve greatness, and some have greatness thrust upon ’em. Thy fates open their hands, let thy blood and spirit embrace them.”1

Is leadership primarily a matter of fate? Good DNA? Innate talent? Many people think so. A website called BC Technology boldly declared the following a number of years back:

Leaders are born, not made. You either have it or you don’t. The leadership gene should be mapped somewhere in the genome so we can develop a simple blood test early on and save tons of money and tons of anguish on those that try to lead, but fail miserably at it…

Critical pieces of leadership are really core parts of your personality. You either have charisma or you don’t. You were born with a love for hard work or you are lazy. You have self-confidence oozing from your pores or you have self-loathing.2

I beg to disagree. I have known too many leaders (including myself) who showed little aptitude in the early going for taking charge. They wouldn’t have won a popularity contest or been voted most likely to succeed. They had neither “the look” nor the assumed requisite temperament of leadership.

Some strong leaders are indeed quite affable, but others are quietly deliberate. They don’t talk much, but when they do, they’re worth listening to. In other words, leaders do not all possess one personality. Take, for example, the apostles Jesus chose, who ranged from obstreperous Peter to cautious Thomas. Jesus chose both “work the system” Matthew (a tax collector for the Romans) and firebrand protestor Simon the Zealot.

As Susan Cain writes in her national bestseller Quiet, “Contrary to the model… of vocal leadership, the ranks of effective CEOs turn out to be filled with introverts, including Charles Schwab; Bill Gates; Brenda Barnes, CEO of Sara Lee; and James Copeland, former CEO of Deloitte Touche Tohmatsu.”3

Everybody, whatever their bent, can muster the inner fortitude to first lead themselves before trying to lead others. What does this entail? It means focusing on the future, setting a worthy objective that will be good for all concerned, and then figuring out how to communicate this to employees and other stakeholders.

In this way, leaders develop themselves over time. They don’t rely on magic from a black box. They discipline themselves to discern a clear vision and then set about pursuing it. Granted, they don’t get everything right the first time, but they learn from their misjudgments and figure out how to be more effective in the next round.

I sometimes get the chance to speak at college commencements. I say something like this to the excited graduates in robes and mortarboards seated before me:

Today you cannot help feeling that you have achieved. You have earned a degree. But close your eyes for a moment and ask yourself where you want to be in five years. Do you have a real plan? Do you have a vision that is beautiful? Does it hold value? Or are you just going to head out into the world and see what happens? If you want to become an electrical engineer, for example, how are you going to get there? Do you need to go to graduate school or not? What are the steps that will get you to your goal? When you arrive twenty years down the road and look back on your life, what will you see? Will you be proud of your record, or will you see only a fog of meandering?

Of course, I get a round of applause at the end. Some graduates even come up to me afterward and say, “Great speech!” At one university, somebody actually turned my comments into a rap song and posted it on YouTube.

My point is, leaders are dreamers. They set their sights on worthwhile goals that will be good not only for themselves but also for their families, their colleagues, their employees, their customers, their investors, and society at large. If they aspire only to chase after personal fame or fortune, life will probably knock them down. But if they set out to make a specific contribution to the world, they can go far.

Once the vision is in place, the practical work begins—the work of making conscious decisions about how to bring that vision to pass.

For example, if I say, “I envision a great marriage, so I have decided to love my wife,” I need to be aware of what that entails. It means I will take notice of her needs and wishes. I will protect her as best I can from dangers, be they physical or financial. I will participate with her in the arduous work of raising children together. I will compliment her achievements, both in the home and beyond. This list could go on and on—the implications of my decision to love her.

Now if I say I envision building a strong furniture chain or a leading taxi service or an effective mission to serve the poor, I have to decide some things. Leadership is a lot about conscious decision making. It is about making up your mind that certain things are going to happen, because you’re going to pursue them relentlessly. You’re going to let nothing stand in your way.

How does it encourage you to know that becoming a leader is a process? In what ways is God calling you to lead today? We’d love to hear your thoughts in the comments!