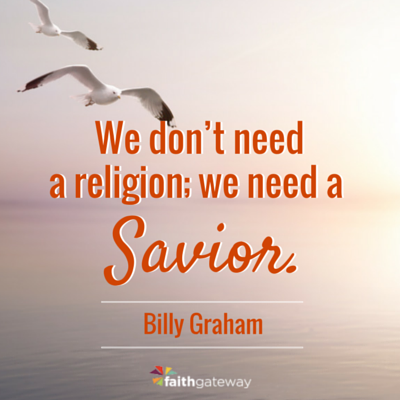 In October 1929, the Saturday Evening Post published a landmark interview with the great physicist and mathematician Albert Einstein.

I find his response to questions of Jesus as a historical figure simply breathtaking. He answered,

I am a Jew, but I am enthralled by the luminous figure of the Nazarene… No one can read the Gospels without feeling the actual presence of Jesus. His personality pulsates in every word. No myth is filled with such life.

While no one knows if Einstein ever made Jesus the Lord of his life, he did say this near the end of his life:

If you ask me to prove what I believe, I can’t… The mind can proceed only so far upon what it knows and can prove. There comes a point where the mind takes a leap… and comes out upon a higher plane of knowledge, but can never prove how it got there. All great discoveries have involved such a leap.

This, my friend, may be the point in time for your higher plane – relying on more than others’ testimonies and completely on faith in God alone because of what He says about Himself.

This leap of faith is given when you speak the name of Jesus in sincere truth, realizing that you are Hell-bound without His forgiving grace and mercy. Ask Him to look into your barren heart and your hungry soul and fill it with the faith to believe that He will change you. No matter how much knowledge you gather, no matter how much proof you accumulate, you will never know the Lord Jesus Christ without taking the certain leap of faith that salvation comes only from Him.

Now faith is confidence in what we hope for and assurance about what we do not see. This is what the ancients were commended for. — Hebrews 11:1-2

The question remains: What have you decided about Jesus Christ?

There is no such thing as staying neutral. Peter Larson wrote, “Despite our efforts to keep Him out, God intrudes. The life of Jesus is bracketed by two impossibilities: a virgin’s womb and an empty tomb.’”

There are many among us today who acknowledge Jesus as a historical figure. Many even claim to follow Him, but their lives do not reflect a change in their thinking or in their behavior or whether the Holy Spirit reigns within them, enabling them to think godly thoughts and behave in a way that honors the Lord. The Bible says,

If we say that we have fellowship with Him, and walk in darkness, we lie and do not practice the truth. — 1 John 1:6

Buddha simply said, “I am a teacher in search of the truth.”

Jesus said, I am the Truth.

Confucius said, “I never claimed to be holy.”

Jesus said, Who convicts me of sin?

Mohammed said, “Unless God throws his cloak over me, I have no hope.”

Jesus said, Unless you believe in me, you will die in your sins.

While it is captivating to read what others say about Jesus Christ, faith is still the key to believing in Christ, who saves the sinner’s soul.

As I meditate on the infallible proofs from Scripture of the life, death, and resurrection of this One solitary life, it occurs to me that there is a tremendous amount of convincing evidence – evidence that would be acceptable in any court of law as to the validity of Christ’s resurrection.

But there are many who still have serious doubts. I am not presumptuous when I say that I have no doubts. I have experienced the living Christ in my heart. But for some of you who may be skeptical, there are many other reasons why I am sure that Christ rose from the dead.

Christ’s birth was no ordinary birth. It was accompanied by angels’ voices and celestial wonders. His life was no ordinary life, for it was marked by many signs and miracles. We’ve seen that His death was no ordinary death, for it was distinguished by unusual compassion, geological disturbances, and solar irregularities. Such a life could not long be contained in a grave, even though it was sealed in a prison of stone.

Yes, the Old Testament predicted that Christ would rise again. Every important event in Jesus’ life was described many centuries before He came in the flesh, and when Jesus came, He fulfilled every prophecy.

The Lord Himself will give you a sign: Behold, the virgin shall conceive and bear a Son, and shall call His name Immanuel. — Isaiah 7:14

He bore the sin of many, And made intercession for the transgressors. — Isaiah 53:12

The Lord makes His life an offering for sin… After the suffering of His soul, He will see the light of life. — Isaiah 53:10-11

We’ve also seen that during Christ’s ministry He taught that He would die and be resurrected (Matthew 20:18-19). This blessed Christ, who never deviated from the truth, can certainly be trusted, and His own words comprise some of the most reliable and convincing evidence of His resurrection.

Jesus connected His own resurrection with our endless life when He said,

I am the resurrection and the life. He who believes in Me, though he may die, he shall live. And whoever lives and believes in Me shall never die. — John 11:25-26

Do you accept these words of Jesus? I do.

Even His most avowed enemies never caught Him in a lie. He, who was truth itself, can be trusted implicitly. He said He would be in the grave three days — and He was. He said He would come forth from the grave — and He did. He said that all those who believe in Him would have hope of everlasting life — and they have. He said,

I am He who lives, and was dead, and behold, I am alive forevermore. — Revelation 1:18

And we, also, will one day die and be resurrected. This is the great hope and certainty for those who follow Jesus.

We have the documented testimonies of those who were eyewitnesses to His resurrection. Angels, His disciples, the Roman soldiers, and a myriad of witnesses all shouted,

The angel said to those who came to pay tribute to the dead,

Why do you look for the living among the dead? He is not here; He has risen! Remember how He told you, while He was still with you. — Luke 24:5-6

Peter, always the outspoken one, said,

We are witnesses of everything He did in the country of the Jews and in Jerusalem. They killed Him by hanging Him on a cross, but God raised Him from the dead on the third day and caused Him to be seen… by us who ate and drank with Him after He rose from the dead. — Acts 10:39-41

We did not follow cleverly devised stories when we told you about the coming of our Lord Jesus Christ in power, but we were eyewitnesses of His majesty. He received honor and glory from God the Father when the voice came to Him from the Majestic Glory, saying, “This is my Son, whom I love; with Him I am well pleased.” We ourselves heard this voice that came from Heaven when we were with Him on the sacred mountain. — 2 Peter 1:16-18

The Bible says the apostle Paul “went into the synagogue, and on three Sabbath days he reasoned with them from the Scriptures, explaining and proving that the Messiah had to suffer and rise from the dead.

When you look for Jesus you will not find Him on the cross nor will you find Him in the tomb – the cross is barren, the tomb empty. Your empty heart, though, can be filled with the forgiveness of the bloodstained cross and glory of the vacant tomb. He lives and abides within those who believe and obey Him by following His Word. We live and die, and in between we are all given the same choice — what will we do with Jesus — the resurrected Christ?

Excerpted with permission from The Reason for My Hope by Billy Graham, copyright Thomas Nelson, 2013.

What better day than today to take Jesus as your Savior? Listen to the words of Dr. Graham and the words of holy Scripture and surrender to Him today! Come join the conversation on our blog! We would love to hear from you! ~ Devotionals Daily