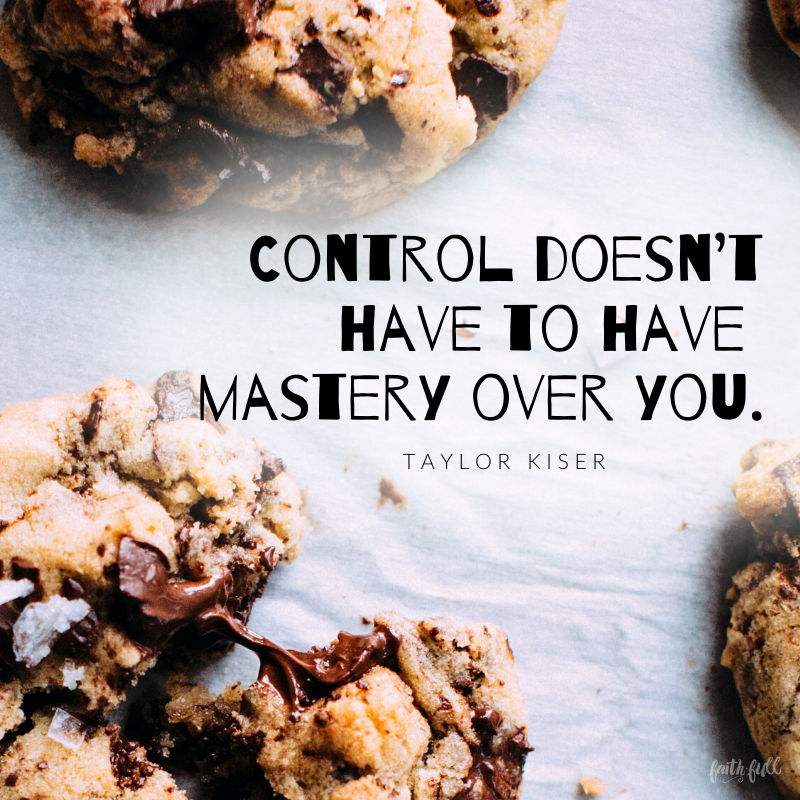 I’ve learned that when you try to control everything, you enjoy nothing. ~ Anonymous

I like to think I have it all under control.

And all the women said amen.

All of us want to be, or at least appear to be, in control in some way or another; it’s a natural desire. Maybe you want to be the head honcho at work and control everything so you end up looking like the star. Maybe you want to be in control of your kids, making sure they’re always on their best behavior so the moms think you’re a superstar. Or maybe, like me, you’re one of those “ten-year plan” kinda people who has your whole life planned out because you want to control every aspect. Whatever it is for you, no one wants to feel out of control.

And we’re not talking out of control like when your boyfriend broke up with you and you assumed, at the age of twenty, you were doomed to die alone, so you ate an entire box of chocolates in five minutes. Don’t look at me like that, I know you did that in your past too. We’re talking a much deeper loss of control: the kind that draws us away from the One who has everything under control. The kind that makes us feel small. The kind that makes us feel like we’re somehow not worthy because we don’t have it all together. The kind that fills us with fear of the unknown. We grasp at everything possible so we never have to step into that unknown, and we try to take control of our lives.

It’s not a bad thing to want to be great at your job or to have kids who aren’t wild and crazy hooligans, or to have plans for your life. Even the Bible tells us self-control is a good thing. Hey, it’s one of the fruits of the Spirit: love, joy, peace, patience, kindness, goodness, faithfulness, gentleness, and self-control (Galatians 5:22-23). If it’s in the Bible, it has to be a good thing, right?

But you know what is also in the Bible? The enemy. And he is no good.

So why do we try to control? In my opinion, it’s for a few reasons. One reason is that humans are prideful! We think we can run our lives the best by ourselves, and we don’t want to give God the chance to show us that He can actually do it better. Another reason could be because we’re terrified we won’t like what God does with our lives if we give Him control. We even see Eve trying to take control in the Garden of Eden. She ate the fruit independently of God, and therein lies the problem. When we attempt to take control independently of God, things go a little bit crazy.

If you look at the definition of “control” in the dictionary, you might see my face. My husband calls me “Type A+”; I know I am a total control freak. When I started my own business, I couldn’t hire anyone to help me, although I was drowning, because that would mean giving up some control. I even had to control the people around me because I thought it might be too risky to be around people and have them find out the real me, the one I thought had no value or worth.

But the biggest area of control for me was food and my body. I controlled my food and exercise, keeping a white-knuckled hold on each bite and each rep so I could control exactly how my body looked. I figured out exactly how many calories to eat, exactly what macros (protein, fat, and carbs), and exactly how many minutes, reps, and sets I had to do at the gym to control my body to be the image of perfection.

All I saw was a girl who was totally, 100 percent in control.

Or so I thought.

It’s easy for us to justify wanting to be in control because self-control is a fruit of the Spirit. God wants us to have self-control. I thought I was a pretty awesome person for being able to control myself around cookies. People commended me for it. They told me they wished that they could be like me. But what they didn’t know was that I was thinking about those cookies all day, wishing I could just learn to let go of control and eat one. I was yelling at God in my mind for making me think of cookies all the time. Why couldn’t He just make me not think about food so my life would be so much easier? People didn’t know I often said I wouldn’t wish what I went through in my brain on anyone. What I didn’t realize was that the control I praised myself for was actually controlling me.

Typically, at least for me, when I feel like I have it all together and I’m totally in control is usually when I’m the most out of control. When we’re at our prime at work, killing it and working all the hours, our social and family life can be getting a little out of control. Or maybe you’re working so hard on that master’s degree you’ve let your own self-care become nonexistent and out of control.

I had obsessive thoughts about food all day long. When would I eat? What would I eat? How many grapes would I be able to have? Would I get hungry and have to ignore it because it wasn’t “time to eat”?

I can tell you from personal experience, being controlled by control itself is probably the least fun and least life-giving thing you could do to yourself, no matter how much you tell yourself that you are doing it to have the best possible life for yourself or be the best possible version of you.

I knew God wanted to have control of my life, but I was still so frustrated with Him over the break-up incident that I didn’t even want to acknowledge that He was there, trying to get me to give up my life and give it back to Him. You might not have gone through a breakup, but I imagine there has been a similar incident in your life when you were angry with God and tried to run the other direction, pretending like you could get everything under control by yourself.

Control doesn’t have to have mastery over you. Isaiah 61:1 says there will be freedom for the captives and the prisoners will be released from their darkness. That means you! That means me!

Jesus came for our freedom. He doesn’t want us to be bound by the shackles of control and slaves to the desires the devil places within our hearts.

Can I tell you something? The enemy, that pesky guy who is prowling around like a roaring lion wanting to devour you, is the one who places the need to take control of our lives in our hearts. He knows God is in control, but he doesn’t want us to know that. And so the crazy control cycle continues. Can I tell you something else? Our need for control is rooted in some of the things we’ve already talked about, like a need for perfection and for a feeling of worth. When you feel like you don’t have it all together, do you feel like things are going perfectly? Do you feel super valuable? That’s a big, fat nope. That drive for perfection and value is what leads us down the dangerous path of control, landing us in the shackles of slavery and unable to see any way out.

That’s when we ask, “Did God or culture tell me that I needed to be in control?”

And we realize there is a way out of this control culture. It just looks different from what we expected.

Jesus broke our slavery when He died for us, extending His grace and mercy to cover our sin of trying to take control. 2 Corinthians 5:17 says,

Therefore, if anyone is in Christ, the new creation has come: The old has gone, the new is here!

But thanks be to God that, though you used to be slaves to sin, you have come to obey from your heart the pattern of teaching that has now claimed your allegiance. You have been set free from sin and have become slaves to righteousness.

We no longer need to live in the control cycle, letting it have mastery over us so we continue on the Perfection Pursuit. We are now slaves to righteousness.

But whoever looks intently into the perfect law that gives freedom, and continues in it — not forgetting what they have heard, but doing it — they will be blessed in what they do.

Being a slave to the will of God allows us to enter into the freedom and fullness of life He wants for us.

When I eventually got over my anger at God, came back to Him, and walked through healing, I would read Scripture telling me to not worry about what I would eat. Not worrying about what to eat was a law of God I began to follow, and because of my obedience to that law, I was able to experience freedom and a fullness of life. The same goes for you too.

Whenever you walk through life following God’s laws, you will find that your life opens up and your freaky, controlling self starts to slowly die.

Let it go, friend. As followers of Jesus, we’re not in control; He is. Thank God! I don’t know about you, but any time I’ve tried to be in control, it’s been a disaster! Come share your thoughts about following Christ instead of our own plan on our blog. We want to hear from you! ~ Laurie McClure, Faith.Full