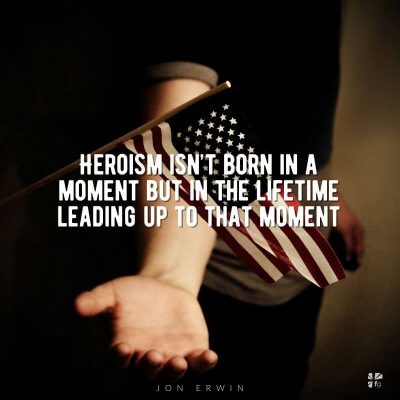 For a long time, I ran away from my grandfather’s story as a Medal of Honor recipient. I didn’t want to be overshadowed by it. It was too spectacular and too distant for me to connect with. He had his life and I had mine, and I didn’t see much connection between the two. It was as if there were a voice at the back of my head saying, “Okay, your grandfather is a big war hero. Now what are you going to do?”

But after Red died, his story began to inspire me.

I am a professional storyteller, and my earliest memories are of Red’s telling me stories. Perhaps in doing so he helped set me on a path toward my destiny.

I spent years searching out my grandfather’s story. The quest took me, my brother, and my coauthor across the United States, the Pacific, and Japan. I spoke with the woman he loved, with the crewmates he saved, and with the friends and family who shaped his life. I unearthed much of his voice through the memories of my father and in letters, scrapbooks, and archives scattered across the country. I learned a lot.

But there was one thing I didn’t understand. Why and how did Henry Eugene “Red” Erwin do what he did that day in April 1945 in the sky over the Pacific Ocean?

There was one man who might know the answer.

I had to see him.

My quest took me to Charleston, South Carolina, to meet Medal of Honor recipient Gary L. Littrell, a Vietnam-era veteran who serves as president of the Congressional Medal of Honor Society. He knows the history of the medal, the people who have received the award, and the experience of it as well as any person.

Gary’s office is in the USS Yorktown, an Essex-class aircraft carrier that saw action across the Pacific theater during World War II and is now permanently berthed at the Patriots Point Naval and Maritime Museum at Charleston Harbor. It is a magnificent ship, rich with history, and it houses the Medal of Honor Museum. It was the tenth aircraft carrier to serve in the US Navy, and it was renamed in honor of the original Yorktown carrier that was sunk during the epic 1942 Battle of Midway. It was known as the Fighting Lady, and it joined in the Pacific offensive beginning in late 1943 and ending with the defeat of Japan, after earning the Presidential Unit Citation and eleven battle stars.

The offices of the Congressional Medal of Honor Society are below-decks, nestled at the far end of the Medal of Honor Museum. I walked through exhibit after exhibit displaying images of Americans performing acts of courage, sacrifice, and valor. Each face stared back at me, reminding me of Hebrews 12:1:

Therefore, since we are surrounded by such a great cloud of witnesses,…let us run with perseverance the race marked out for us.

Each story seemed more incredible than the previous one, acts of superhuman and self-sacrificial courage that awed and inspired me. I kept thinking, What unites these people and people like my grandfather? How are they able to summon such reservoirs of courage? Finally, I had a chance to get an answer.

As I reached the end of the exhibits and entered the offices of the Medal of Honor Society, Gary Littrell greeted me like a long-lost friend, sat me down, and talked to me like the strong, humble, funny, and folksy man he is. He described himself as an old army sergeant from Spottsville, Kentucky, which he explained was “in between Poopy Holler and Pee Ridge.” I asked him about the Medal of Honor and all it represented. He told me his story, which over the years he has shared with veterans, schoolchildren, journalists, and historians alike.

“We had four American advisors,” he recalled. “We were moving toward the Cambodian border to find the enemy, identify their location, back off, and call in air strikes on them. We moved up on top of this one hill to spend the night. We were surrounded by two North Vietnamese regiments and a sapper battalion, consisting of about five thousand of North Vietnam’s finest.”

He continued, “It started with an artillery barrage, which killed the South Vietnamese commander, killed one of our lieutenants, filled the other one’s liver full of shrapnel, and busted the eardrums of the third sergeant. So I was the only American left after I evacuated those three. Didn’t seem like anyone else wanted to come in and help me. I couldn’t get any air support at all, no US artillery. All we could do was evacuate the wounded by helicopter. We finally gave that up. Because the fighting was so heavy they didn’t want to come in and evacuate anyone else. They did try to make two or three high-speed, low-level runs and kick some ammunition out to us, but they couldn’t land. So my primary job was just command and control, trying to get the South Vietnamese to stand and fight.

“It was a twenty-four-hour, four-day fight,” Gary explained, remembering how fatigue overwhelmed him but he somehow kept fighting and leading the South Vietnamese troops, who were like brothers to him.

“I fought with the Vietnamese rangers, and they were warriors to the end,” he remembered. “Most of them were vengeance, grudge fighters. They’d lost their wife, their kids, their mothers, their fathers. The life expectancy of a ranger was about eight months. And depending on their religion, most of them believed if they died honorably they’d come back a better person; hence they weren’t afraid of death. Me, I didn’t believe that. I didn’t want to get killed. I didn’t want to be reborn the next day a better person. I wanted to stay the person I was. I kind of liked me. But they were vengeance fighters. They were hard core.”

The incredible story is described in Gary’s Medal of Honor citation:

His dauntless will instilled in the men of the 23d Battalion a deep desire to resist. Assault after assault was repulsed as the battalion responded to the extraordinary leadership and personal example exhibited by Sfc. Littrell as he continuously moved to those points most seriously threatened by the enemy, redistributed ammunition, strengthened faltering defenses, cared for the wounded and shouted encouragement to the Vietnamese in their own language. When the beleaguered battalion was finally ordered to withdraw, numerous ambushes were encountered. Sfc. Littrell repeatedly prevented widespread disorder by directing air strikes to within 50 meters of their position. Through his indomitable courage and complete disregard for his safety, he averted excessive loss of life and injury to the members of the battalion.

I thought about those words: dauntless will. Is that a characteristic I possessed? Was it learned, inherited, in my DNA?

“On the fourth night, I pretty much had come to the conclusion that I was dead. It was over. A very quiet, peaceful, tranquil feeling came over me. God and I have our own thing going. We understand each other. That night, I knew that I would probably never see the sun shine again. It was a quiet, peaceful, tranquil feeling. Thank God he didn’t take me. He left me here for a reason. I’m not sure I found that reason yet. But there’s a reason I’m here.

“It was kick butt or die,” he explained simply. “It was not much of a choice. You know, it was fish or cut bait. And I prefer to fish. Finally, I walked off the hill four days later with approximately forty-one walking wounded and myself.”

After the evacuation, Gary radioed to the nearest American position, where an officer said, “Hey, you’re getting close to my perimeter. How bad off are you?”

“What can I do for you?” the American asked.

“I want a cold drink of water and a cigarette.”

When Gary and his men broke through the American perimeter, there was his new friend, waiting for him with a cup of cold water and a cigarette.

I asked Gary how the Medal of Honor affected his life.

He admitted, “All of a sudden, everybody’s bowing, the ladies are curtsying, and everybody’s shaking my hand, and I go to the White House to meet the president. I go over to the Pentagon and meet all the generals. Then I come back to Fort Campbell, Kentucky, back to my real job, and I had placed myself up on a pedestal a little bit.

“And one night, Sgt. Maj. Joe Feeney, a good friend of mine, looked at me and said, ‘You know, I used to like you. I don’t like you anymore. You’ve been shot in the butt with the Glory Gun. Now come on down off that [darn] pedestal you placed yourself on and get back down here with the guys that know you and love you.’ I didn’t have a response for that. I talked to a few of my other friends. They said, ‘Yeah, you’re not as likable as you used to be.’

“So I had to self-evaluate myself. And I said, ‘Hey, what happened, happened.’ Now we’re back in the real world. And so, yeah, it affected me for a while. I was shot in the butt with the Glory Gun. It doesn’t affect me now. I realize that I’m wearing this medal for the four hundred people who died those four days. I’m their representative. They won this medal. I was selected to wear it for them.”

Finally, I asked him the question that had perplexed me for so long. “How did you do it? How did you lead those men through that battle? How does a man throw himself on a grenade? How does a man embrace and carry a phosphorus bomb burning at over a thousand degrees? How do you decide in an instant to sacrifice yourself? How did my grandfather make the choice to grab a burning bomb?”

He replied, “It’s not a choice really. Not a conscious one at least. You don’t have time to make a decision. You just do it. You love the men beside you. You’ll do anything to save them.”

Gary Littrell and my grandfather helped me realize that heroism isn’t born in a moment but in the lifetime leading up to that moment. Whatever is in the character of these heroes manifests itself in moments of extreme pressure, and acts of courage, like Medal of Honor actions, are often acts of pure self-sacrifice and love.

I realized that, in the case of my grandfather, he had been doing this all his life. He was accustomed to sacrificing himself to the needs of other people. He started work at the age of ten and became the head of a household consisting of a widow and seven brothers and sisters. He quit high school to feed his family. He turned down a stint at Yale so he could more quickly put his life on the line for his country. He spent every Sunday morning of his life in church, in deep reflection on the fundamental Christian messages of love, compassion, charity, and self-sacrifice.

Today is Veterans Day in the United States. We celebrate all those who have served in our country in wartime or in peace, whether they are living or have passed away. Who are you honoring today? Come share with us in the comments. We want to hear from you! ~ Devotionals Daily