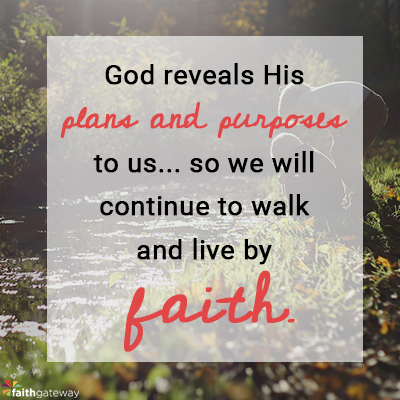 You can’t turn on your TV or open your web browser these days without something flashing urgent on the world scene.

Stories flood the airways about another urgent conflict in the world with Russia, Iran, ISIS, North Korea or China, all of which appear to have the real potential of igniting world ending battles!

And people with even a surface level understanding of Biblical prophecy, are intrigued and glued to the news to see how everything will unfold.

Such fascination surrounding end-times prophecy has increased exponentially in the last half century — and there seems to be nothing to alter that trajectory. Unfortunately, many people, including Christians, end up being shaken emotionally and spiritually when world events unfold in unexpected and dramatic ways and the clash of kingdoms and nations intensifies before their eyes.

Any new, charismatic leader, for instance, could in many people’s minds, be the emerging Anti-Christ!

Such overreaching and often irrational responses reveal a fundamental problem in how many misuse prophecies to support their fanciful ideas. It’s difficult — and dangerous — to try to match bits and pieces of current world events with God’s prophetic program because we don’t possess His eternal perspective.

But God has provided us a better way. He has given us His Word.

When Your World Explodes

Imagine what it would have been like to be in Abraham’s shoes when he heard God say,

Leave your country, your people and your father’s household and go to the land I will show you. — Genesis 12:1

So that’s exactly what Abraham did. He journeyed from southern Iraq to the land of Canaan, accompanied by his entire family, a host of servants and hired hands, and numerous livestock and herds. And along the way he struggled with famine, family problems, and even fought off foreign invaders.

But the greatest threat of all must have been the events described in Genesis 18-19 — a time when the world itself must have seemed on fire. Abraham witnessed one of the most dramatic and explosive events in all of history — the sudden, complete destruction of two of the most significant cities in the Middle East… Sodom and Gomorrah. The heavens opened, and fire and brimstone rained down on these and other nearby towns, wiping out the entire population.

Imagine that happening today. Imagine the breaking news coverage on every channel — the havoc and chaos and confusion that would ensue. Just think of the fear such an event could bring on people. What would you say to your children? What would you ask the Lord? Imagine how your faith would be shaken, how fear would threaten to overwhelm your mind and emotions, and the level of alarm that would be raised in your children’s minds.

Yet, before God brought judgment on Sodom and Gomorrah, He prepared Abraham for what was about to occur.

‘Shall I hide from Abraham what I am about to do? Abraham will surely become a great and powerful nation, and all nations on earth will be blessed through him…’ Then the Lord said, ‘The outcry against Sodom and Gomorrah is so great and their sin so grievous that I will go down and see if what they have done is as bad as the outcry that has reached me. If not, I will know.’ — Genesis 18:17-21

What followed was a back-and-forth negotiation between God and Abraham for the welfare of a few faithful people in those doomed cities.

Ultimately, God judged these cities for their sin, and they were utterly destroyed. Yet Abraham’s faith was not shaken — it was bolstered. Why? Because God had revealed His plan beforehand. Abraham could pass through that time of calamity with a peace and readiness he would otherwise not have known.

Pointing People to the Truth of Prophecy

That’s the power and perspective of prophecy.

Knowing what the Bible says about the future can help us put current events in their proper perspective. God reveals His plans and purposes to us not so we will shrink in fear but so we will continue to walk and live by faith.

In the midst of all the chaos, there are three primary values for us as believers for turning to the great prophecy passage of Scripture.

1. Prophecy teaches us to trust in the sovereignty of God. Beyond the headlines and the current upheaval on the world geo-political scene, we each face very real times of uncertainty in our own lives. Perhaps it’s an ominous test result. Maybe it’s teenage son or daughter caught in the vice-grip of depression’s dark cycle. It may be an extended period of doubt or of waiting on God to reveal His plan. Regardless, like in the governing of nations, the prophecies of God assure us that He is in control. Isaiah, the great prophet, declared, when pronouncing certain doom upon nations who defied God’s righteous decree,

Even the wilderness and desert will be glad in those days… from there the Lord will display His glory, the splendor of our God. — Isaiah 35:1-2

We can trust Him even in disastrous times.

2. Prophecy encourages us to stay alert and faithful in light of Christ’s return. To the Christians at Thessalonica, Paul wrote,

For you know quite well that the day of the Lord’s return will come unexpectedly, like a thief in the night… But you aren’t in the dark about these things, dear brothers and sisters, and you won’t be surprised when the day of the Lord comes like a thief. For you are all children of the light and of the day. So be on your guard, not asleep like the others. —1 Thessalonians 5:2-8

3. Prophecy urges us to always be prepared to share the hope we have in Christ with those who need it most. People everywhere are feeling the same weight of uncertainty and fear as you might be, given the tumult of our times. Yet, we have an opportunity and an obligation to offer to everyone the confidence and hope we have in Christ (1 Peter 3:15).

Where We Go From Here

When Charlie and I wrote our newest book together, Clash of Kingdoms: What the Bible Says About Russia, ISIS, Iran, and the End Times (Nelson Books) we hoped to demonstrate both the power and perspective of the Bible in helping believers navigate the unsettling circumstances surrounding current events. But we also wanted to provide to anyone, regardless of their circumstances, the genuine hope available in the finished and life-transforming work of Jesus Christ.

We look at ISIS and how this bloodthirsty terrorist state continues to ravage the Middle East and encroach upon the world’s sense of security and calm. We explore Russia and what may be behind its reemergence onto the world scene. We also examine Iran, Iraq, and Syria, to see how the chaos in these countries is reshaping the contours of this ancient and strife-weary region. And we investigate the apparent disintegration of the European Union as a unified and compelling entity on the world stage to see how it might be able to refashion itself into a new Western order as part of God’s end-times drama. And we focus on Israel, a small nation with a starring role in God’s future plans for this planet.

But whatever situation you find yourself in today, as a ministry leader, or lay follower desiring to know more about prophecy, you may discover among the people you serve one of two very real emotions:

The first is apathy — why does any of it matter? Since I can’t do anything about what’s happening in the rest of the world, why bother? I’ll just go on living my life. The other reaction you might encounter is anxiety — feeling as if the darkness and chaos of evil forces beyond anyone’s control are threatening those most important. If you are feeling either of these two very powerful emotions, or you are called upon to serve someone who is, we point you once again to the words of the apostle Paul, who exclaims…

Awake, you who sleep,
Arise from the dead,
And Christ will give you light.

God didn’t give us prophecy to confuse us, but to awaken, prepare and strengthen us for what is to come. Neither apathy or anxiety is the right response, but listening to and weighing Scripture is. Come share your thoughts about prophecy on our blog. We would love to hear from you! ~ Devotionals Daily