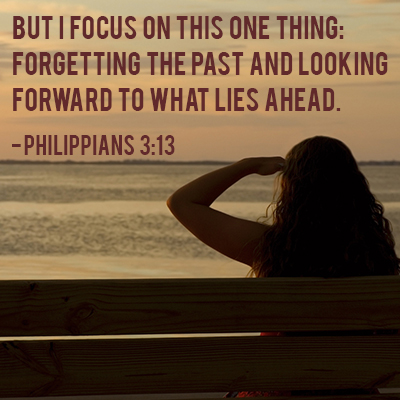 Maybe today you’re not living with a mountain of regret, but you are starting to create one.

Maybe you’re married and there is something going on. There is behavior you’re involved in. There is a relationship with somebody. Maybe it’s not a full-blown affair yet, but you started crossing little lines.

Maybe God is calling you to take a risk, and you’ve been shrinking back out of fear, and you’re going to get to the end of your life and say, “God, why didn’t I trust you? Why did I let fear hold me back from keeping me from not doing the thing that you wanted me to do to serve you?”

Maybe you’ve missed some key moments with your kids and you’re just realizing that you’ve spent years cheating them so you could chase after that corner office.

Maybe there is a hard conversation with somebody that you have been avoiding, and you sense God is telling you, “You get to the end of your life without doing that, there is going to be a pile of regret.”

Let’s not assign ourselves to a lifetime of regret.

Even if you think it is, it’s not too late. You don’t have to live with a lifetime of regret.

We don’t need more guilt. What we do need is to remember that when regret is not dealt with directly and receptively, it leads to more regret. It holds a certain power over us.

The other day my wife, Brandi, secretly went through my closet and had formed a massive pile of things that she was going to take to the Goodwill. When she wasn’t watching, I went through the pile and removed several of the items, which I promptly returned to my closet. Because most of us have such a difficult time letting go, clutter is a growing problem in our culture – whether in our homes, purses, briefcases, or offices.

But I believe there’s an “inner clutter,” which is a much more severe problem in my life and probably in yours. While my mess of a closet isn’t really hurting anyone, my “inner clutter” is impacting everything about me and everyone around me.

We have a tendency to hang on tightly to outdated thoughts and disturbing memories, or we cling to sentimental parts of our past we feel are too meaningful to abandon.

Maybe you’ve had this happen. You’re driving along listening to the car radio when a certain song comes on that instantly takes you back to a time when you were crushed, heartbroken, or devastated. Suddenly, all those painful emotions come flooding in once again. When that happens, we always have the choice of turning the dial, but we usually go on listening and hurting. Something seems to always be drawing us back into the past.

How often do we clutch the burdens of our own guilt and regrets in our life, when we have the option of releasing them? There are many things we need to release in order to experience true freedom.

Condemning inner voices whisper to us that we should have spent more time with our spouse or children; been a better wife, mom, daughter, or friend; taken a job to contribute to the family income (or stayed home with the children while they were small – moms just can’t win!); accepted the promotion; turned down the offer; said no to temptation. The list of our inner voices is endless!

We tell ourselves we could have tried harder, been more discerning, tuned into another’s needs, kept our cool, stayed calm, not fought back, learned better ways to handle a difficult situation, stayed away, kept our mouth shut, saved up instead of going into debt, or prayed more.

Then we begin to live in the fantasy world of if only. If only I had listened to my parents, if only I had finished my degree, if only I hadn’t married so young, and the list goes on. This is a waste of effort, time, and energy, because we can’t go back and change those things.

The Cross is the only safe place for human regret.

If you’re in the process of creating a mountain of regret, stop!

If you’re carrying a weight of regret on your back that you can’t fix, it’s in the past – put it down and clean it out, because it’s time to make room for something new.

Excerpted with permission from Let Hope In  by Pete Wilson, copyright Thomas Nelson, 2013

Watch the Let Hope In Video

Are you living with a mountain of regret? Do you rehearse mistakes over and over? Pause today and repent over what is plaguing you with guilt and then let it go, receiving forgiveness! Today, you can put that burden down and be free! Join the conversation on our blog! We would love to hear that you’ve left your regrets at the Cross! ~ Devotionals Daily 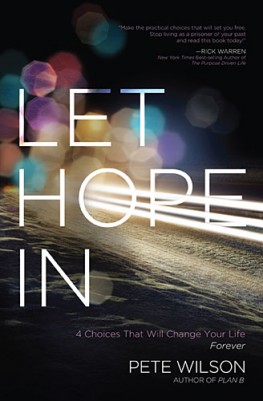