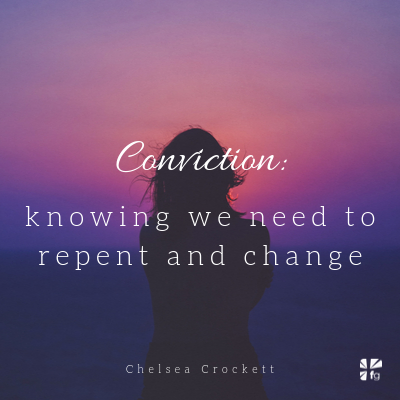 But the Lord God called to the man, “Where are you?” He answered, “I heard you in the garden, and I was afraid because I was naked; so I hid.”

Isn’t it crazy how the first feeling Adam and Eve expressed in the garden after they sinned was shame? I remember listening to a sermon on the topic of shame in our everyday lives. I suddenly understood why shame can so easily creep into our minds. Shame was never introduced until sin was.

The sin we often are guilty of committing is a mixture of failure and pride. Because of this, we must acknowledge when we sin, and confess and turn away. If we don’t, shame can easily bare its ugly face, making us feel like we need to hide from God.

There is a difference between shame and conviction as well.

Conviction — knowing we need to repent and change — is healthy and of God.

Sometimes God will give us an awareness of what we did wrong and nudge us in a direction that is honoring to Him.

Shame — wanting to run from ourselves and hide from God — is not of God, and the enemy will use it as a tool to drive a wedge in your relationship with Jesus.

So, much like sin, we must combat shame when it tries to take hold in our lives!

If we’re not careful, what Adam and Eve felt after eating the fruit in the garden can control a lot of our decisions. Before sin, the earth’s first humans were “both naked, and they felt no shame” (Genesis 2:25). But after they sinned, shame was their reflex because their eyes were opened to their disobedience. Shame prompted them to hide from the only One who could help them.

When Adam answers the Lord after he is called out in the garden, he is afraid and aware of the sinful being he is. And Adam and Eve hid because they knew they had screwed up big time. Sin broke the unity that God and humans had at that time. But

God’s love is stronger than any sin or shame.

This is a turning point in the creation story because God was heartbroken that Eve and Adam had chosen against Him. But He knew He would make a way for humans to live in harmony with him again. The gap between God and humanity would be mended.

Thousands of years later, Jesus stepped on the scene to cross the great divide for you and me. He defeated shame through His sacrificial death, and now you and I can have confidence in the forgiveness he offers.

TAKEAWAY: There is no reason to be afraid like Adam was in the garden. There is no sin that Jesus hasn’t defeated. We can have confidence that there is no need to hide anymore. Walk out into the light so you can be guided by His truth.

CHALLENGE: Be present today in all the things you walk into. There is freedom in becoming aware of the Lord’s work and His presence all around you. Walk in awareness today.

Excerpted with permission from Above All Else by Chelsea Crockett, copyright Beauty Licious.

Are you hiding in shame today? Are you afraid of what God thinks of you and what you’ve done or what’s been done to you? You don’t need to carry that shame. Jesus defeated on the Cross already! Come share your thoughts with us on our blog. We want to hear from you! ~ Devotionals Daily