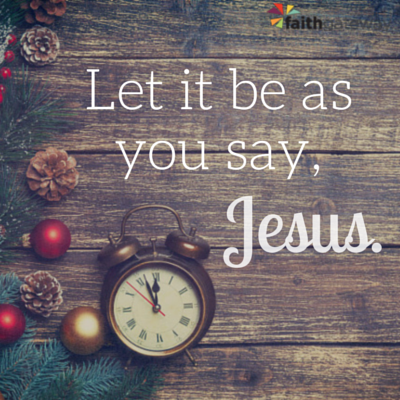 We read about the angel who came to announce the highest calling given to a human. But the high calling was a costly calling, and it came with tremendous suffering. Mary faced the rejection of her fiancé, persecution from her community because of a seemingly illegitimate pregnancy, the pressure of raising the son of God, and ultimately the pain of watching him die a humiliating and excruciating death. All of this lay ahead of her that day the angel came, and the first words out of her mouth were,

Let it be as You say.

God, I want to live that way.

Can you even imagine the day after Mary heard from the angel that she was pregnant with the son of God? There are no categories for this, it was so supernatural. Her true belief in God was evidenced in the denial of herself and the consequences of obedience. The immediate consequences — potentially losing her fiancé and possibly all respect in her society — paled to Mary in light of her God and her calling. Before she even had a chance to process all this, she escaped to her cousin Elizabeth’s house. And when she arrived she started praising God in the most beautiful song:

My soul magnifies the Lord, and my spirit rejoices in God my Savior, for He has looked on the humble estate of His servant. For behold, from now on all generations will call me blessed; for He who is mighty has done great things for me, and holy is His name. And His mercy is for those who fear Him from generation to generation. – Luke 1:46-50

With no regard for the way this would impact her short life here, she looked for the big picture. She saw that this was going to save generations of humans. She felt the eternal significance of her life and praised God that she got to be part of His plan, part of His plan to redeem people.

No matter the suffering she would have in this life, she was praising God for a chance to participate in eternity.

As we studied Mary’s life we were also in the midst of change and obedience. Our first time together, I remember not even having words for all that was swirling around me. We were in the midst of our adoption, I was beginning to see IF:Gathering come to be and we were walking through trials in the lives of many close friends around us.

I brought the small group together because I needed to journey with some friends through this dark but exciting time. I needed to study God’s part in it with other women who also wanted to yield everything. And so we chose to study Mary, a woman who lived a beautiful life amid a weighty call and God-induced suffering.

Mary never sought her own comfort.

She lived entitled to nothing.

She expected suffering rather than being surprised by it.

She waited and responded to God rather than trying to control any outcome.

She submitted to her husband’s leadership over and over again.

She received whatever the Lord had for her with joy.

As I looked at Mary, I saw a girl who surely did not feel worthy or able to bear and raise the son of God, but she did not focus on that. She submitted and focused on the eternal plans of God, and when she did that, she was just in awe that she got to be part of them. The cost and her inadequacy paled in light of God’s plan for humanity. She just was in awe that God would have plans for her simple, short life here.

I am still learning to receive my life rather than fight it so. May we all be brave enough to say, no matter the cost,

Let it be as you say, Jesus.

Adapted with permission from Anything: The Prayer that Unlocked My God and My Soul by Jennie Allen, copyright Thomas Nelson.

Are you willing to say, “Anything You want, Lord. I’m all in. No matter the cost. Let it be as you say, Jesus.” Today, may that be our prayer! Come join the conversation on our blog! We’d love to hear from you! ~ Devotionals Daily