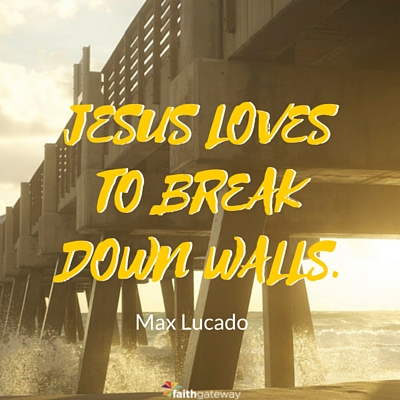 The Falling of a Wall

Then Philip went down to the city of Samaria and preached Christ to them. — Acts 8:5

Do any walls bisect your world? There you stand on one side. And on the other? The teen with the tats. The boss with the bucks. The immigrant with the hard-to-understand accent. Or the Samaritans outside Jerusalem.

Talk about a wall, ancient and tall. “Jews,” as John wrote in his gospel, “refuse to have anything to do with Samaritans” (John 4:9 NLT).

Jesus, however, played by a different set of rules. He spent the better part of a day on the turf of a Samaritan woman (John 4:1-26). He stepped across the cultural taboo as if it were a sleeping dog in the doorway.

Jesus loves to break down walls.

That’s why he sent Philip to Samaria (Acts 8:5-7, Acts 8:12). And when the city broke out into a revival, both men and women were baptized. Peter and John heard about the response and traveled to Samaria to confirm it.

But why hadn’t the Samaritans received the Holy Spirit when they were first baptized? Why delay the gift?

Simple. To celebrate the falling of a wall. The gospel, for the first time, was breaching an ancient bias. God marked the moment with a ticker-tape parade of sorts. He rolled out the welcome mat and sent His apostles to verify the revival and place hands on the Samaritans.

Let any doubt be gone: God accepts all people.

Excepted with permission from God Is With You Every Day by Max Lucado, copyright Max Lucado.

Are there any walls in your life that separate you from those you don’t understand or relate to, or from those who offend you or whom you don’t prefer? Today, let’s allow those walls to fall down so we can be rid of biases and accept all people as God does. Come join the conversation on our blog! We want to hear from you! ~ Devotionals Daily