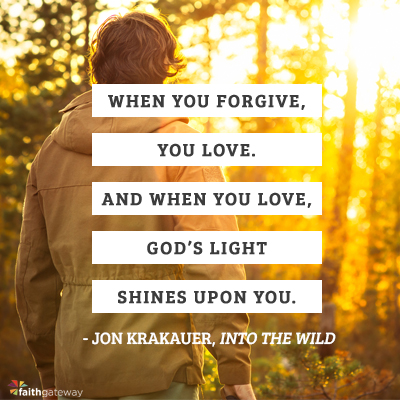 When you forgive, you love. And when you love, God’s light shines upon you. — Jon Krakauer

The first anniversary day of Candace’s disappearance fell on a Saturday, and when we got up that morning, it had all the markings of being just an ordinary day. I wondered if by ignoring it, just not talking about it, we might not really notice it. But right from the beginning, even without any words, I could tell that a cloud had descended on us. Even the kids sensed it and seemed preoccupied.

By afternoon, I was desperate to escape from the heavy mood, and I tried to rouse Cliff into making some last-minute plans.

Couldn’t we at least go shopping?

Cliff had retreated to the basement to work on the computer, and he looked up from his swirl of papers, irritated. I suddenly knew that his absorption was his escape, and he was comfortable in it.

I prowled around the house a bit longer and then decided that maybe Cliff had the right idea. I needed to drown myself in work, hard work. The hardest work I could think of was washing walls.

I should have known it wouldn’t work. I’m never in the best of moods when I’m housecleaning as it is; why would it be any different this day of all days? I could tell that instead of losing myself in the scrubbing, I was just becoming more and more irritated.

I stared at the hundreds and hundreds of little fingerprints. Did the kids touch the walls all the time? Were they blind? Did they find it impossible to walk down a hall or down the stairs without feeling where they were going?

As I worked my way down the stairwell, I glanced at my watch. It was getting closer and closer to four o’clock.

I started to understand the importance of an anniversary. It is probably the closest to the original moment one ever gets.

Time seemed to stand still. Why was this moment so terrifying? What actually happened this time a year ago? Suddenly, I knew! This was not only the anniversary of the day that Candace disappeared; it was also the anniversary of my decision not to pick her up.

Fingerprints were on the wall above the bottom step, and I wondered how they had gotten there. Cliff and I never touched that section of wall, and Odia and Syras were too small. Only Candace, like every teen I knew, would hang onto the doorjamb and swing herself out over the main floor. I looked closer. They were her size.

Immobilized, I sat on the stairs looking up at them. I couldn’t wash off Candace’s fingerprints. So little of her was left. How could I remove one more evidence of her life?

Without looking at my watch, I knew what time it was. It was five minutes after four. The moment was heavy with expectation, as if Candace might call any minute and I would be able to get into the car and pick her up and save all of us from going through the year of pain. We would have Candace again.

Suddenly the expectations turned into an accusation. Why hadn’t I picked her up? This time there was no answer. What kind of mother would allow her daughter to walk home in the cold at such a vulnerable time? Why hadn’t I foreseen what was going to happen? There had been a number of other times when I had sensed that my children were in danger. I had found them perched precariously on top of the stairs or in the kitchen with a knife, but I had always been there to prevent the accident. This time, when the danger had been the most hostile, I had been preoccupied with finishing a writing project.

Why hadn’t we been able to convince the police to get the dogs out when the scent was still fresh? We had done nothing! While she froze to death in a shed, we had been sitting in a warm house just waiting for her to die.

It was all my fault. I could have prevented all of it from happening. She had died, and I had the audacity to survive and go on living.

The fingerprints seemed to grow larger.

I had no defense. The hideous voices were totally irrational, but guilt is irrational. It is a feeling that rarely responds to rational thinking. No matter how hard I tried to reason with it, I still felt guilty. I needed to deal with this feeling on a feeling level.

Blinking away tears, I stood up. The fingerprints needed to be removed. I wondered if it would be possible to remove them. I dampened my cloth and washed them away. There was a clean, white wall underneath. The whole house suddenly seemed sparkling clean.

With each stroke of washing the wall, I was washing away some of my guilt and self-blame. I had to let go of it. I had to forgive myself, which meant admitting my feelings of guilt and feeling the pain of my regrets. It wasn’t only the fact that I hadn’t picked her up that was the source of my guilt; I was also remembering all the times when I hadn’t been the perfect mother.

After a betrayal or violence, the first instinct is to identify the primary cause of the harm. Who did it? We want to lay blame or we feel guilty.

The problem is that rather than identifying the person who actually did the crime, we will find a scapegoat — someone vulnerable, someone already flawed, or someone whom we might not want in our lives.

Chronic blaming can be a form of emotional abuse. Dr. Tom Jordan asserts that being blamed for an act that you did not actually commit is like taking a verbal beating. Someone subjected to a regular diet of blame may start believing that they are responsible for things that were beyond their control or with which they had nothing to do. Dr. Jordan reports that being a victim of a loved one’s blame leads to self-blame and feelings of guilt. Thus, a subtle transition occurs, moving from the blamer’s thoughts of blaming you for the things that happen to me to the thoughts of blaming me for the things that happen to you.

Down the road, the guilty feelings inevitably result in poor self-esteem and destroy relationships.

I remember a case where a child was run over by a car, and the wife blamed the husband because he had been a few minutes late. She falsely reasoned that if he had been on time, none of it would have happened. It nearly destroyed their marriage.
Nothing is more detrimental to a relationship than false accusation. We need to think carefully about whom we blame or what we feel guilty for.

Sitting on the edge of the mountain, the Nazarene scans the crowd below Him. He sees some older women — their faces creased — sitting together, whispering. He glances at them, holds them with His eyes.

Do not judge, or you too will be judged. For in the same way you judge others, you will be judged, and with the measure you use, it will be measured to you.

Here the word judge means distinguishing between something positive or negative. It means to separate. It assumes an intelligent comparison. But, so often, intelligent comparisons aren’t what we do. There is a big difference between the judge in a courtroom and our own inner judge. The judge in a courtroom hears all sides, considers the evidence, and then makes a fair judgment. Our own inner judge wants to quickly settle the issues, which often means blaming someone without always doing the research.

Often, in our need to vindicate ourselves, we will quickly point our finger at someone else, not realizing that every time we do that our own conscience will be tampered with and our sense of right and wrong will be compromised. The blame we issue then becomes our guilt.

In the case of murder, blaming someone can have dire consequences. Many have been falsely accused.

Four months after Candace’s death, Cliff was asked to come to the police station and take a polygraph test. The police said that they would like to test me later as well. By then we were familiar with a polygraph test. We had seen an extensive documentary on television about it, and since the investigation we had read about it. We knew that it would be a risk, and we discussed it as such. But the weight of our discussion was not on the risk of it but on how it might help the case.

Right from the beginning, we had been frustrated by the way the investigation had always centered on us. It was now April, five months after the fact, and they were still watching us. This request was just another sign of that. Maybe, just maybe, if Cliff took the test, they would finally look somewhere else.

Even though we knew the polygraph would not hold up as evidence in court and probably didn’t have much credibility with the majority of people, we knew the police put a lot of stock in it. It spoke their language. Christine Jessop’s parents from Queenston, Ontario, had said the same thing. When Christine’s father had been accused of killing his daughter, he had taken the polygraph to convince the police. They had said it had worked.

We knew the risks, but I think at that stage we would have done anything — even sat in jail — to help clear up the case.

Two hours after Cliff left for the station, the possible implications hit me full force. If Cliff, for some strange reason, failed the test or the machine miscued, he wouldn’t be coming home. He would be arrested for suspicion of murder!

I was never so relieved as when Cliff walked through the door later that afternoon. He was shaken by the ordeal — but vindicated.

I had to let go of my guilt and blame.

Wilma Derksen has endured the kind of trauma that few of us will ever know. Through her journey of loss, grief, suffering, and the ongoing case to find the murderer of her child, she learned slowly but surely to let go, to forgive, even herself. Are you carrying guilt, blame and shame? In Jesus, we already have forgiveness. Will you receive it as Wilma learned to do? ~ Laurie McClure, Faith.Full