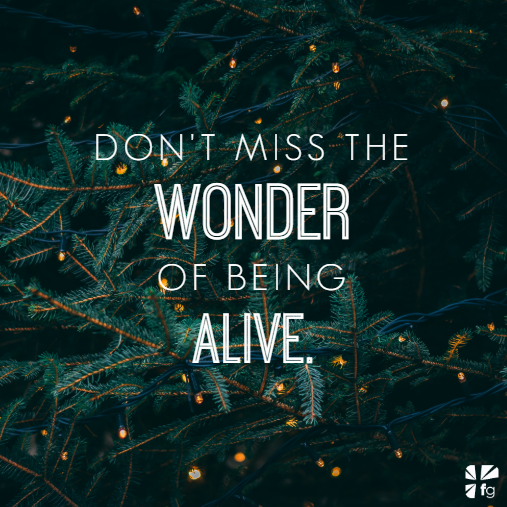 I never noticed that. — Scrooge, in the 1984 movie version, after the Ghost of Christmas Past points out that Belle “resembled your sister”.

Scrooge’s life went astray sometime when he was a young man. We can, with reasonable certainty, say he didn’t wake up one morning and think, Hm. I’m content where I am. I’m enjoying my apprenticeship with Old Fezziwig. I’m in love with a beautiful young woman. I have friends. But I think I’ll begin morphing into a money-centric fool who loses his way, gives up his girl, cuts off his friendships, and winds up as a bitter old miser living in a drafty old house, my life utterly devoid of the slightest semblance of joy — even if it would make a great book by, say, Charles Dickens, assuming I were visited by four eccentric Ghosts.

No, it happened insidiously, as if one of the tires on our car gets out of alignment and starts to wear heavily on the outside edge. But we don’t check on it. And the problem gets worse. It affects the other tires. Soon our steering wheel shakes like an out-of-kilter washing machine agitator, and our car is unsafe to drive. Either that or we crash.

In the 1984 movie version, the Ghost of Christmas Present calls out Scrooge for letting life pass him by. “You’ve gone through life not noticing a lot,” the Spirit says. In the same movie version, at the end, Scrooge tells his nephew Fred, “I see the shadow of your mother in your face. I forgot how much I loved her. Perhaps I chose to forget.”

We need to live intentionally, with our antennae up. We need to notice our life as we’re living it. Why? For three reasons. The first is to appreciate all that God has blessed us with. Given the chance to live their lives again, fifty octogenarians were asked by sociology professor and author Tony Campolo what they would do differently. They said they would risk more, would do more things that would live on after they were dead, and would reflect more on the journey while they were on it.

To not pay attention is to miss the wonder of being alive.

To miss the people around us, the needs around us, and the beauty around us. And we miss the umbrella above it all: the God who loves us unconditionally.

In these days of multitasking, social media, and dawn-to-dusk rushing around, I wonder if we’re going too fast to do so. Or if we’ve fooled ourselves into believing that we’re accomplishing so much, when what we’re really doing is making treasure of the trivial — immersing ourselves in making money, for example, at the expense of building relationships. Or if subconsciously we purposely go too fast — to avoid having to face a compulsive “us” that we might not want to face.

Dickens grew up as a keen observer of the world and his place in it. Sickly and frail, he was much more participant than athlete. “He loved to watch people at church, in the market, at school,” writes Norrie Epstein, author of The Friendly Dickens. Not surprisingly, he became a writer, an observer of — and commentator on — the human condition.

In Thornton Wilder’s Our Town, Emily, who died while giving birth to her second child, is given a chance to witness the day she turned twelve. In doing so, she realizes all the nuances of life she would never again see.

“It goes so fast,” she says. “We don’t have time to look at one another. Goodbye world… Goodbye to clocks ticking… and Mama’s sunflowers. And food and coffee. And new-ironed dresses and hot baths… and sleeping and waking up. Oh, earth, you’re too wonderful for anybody to realize you… Do any human beings ever realize life while they live it — every, every minute?”

“No,” replies the stage manager, then pauses. “The saints and poets, maybe — they do some.”

Second, we need to notice what’s going on around us so we can be there for others. Thomas Hood, in an article appearing a year after A Christmas Carol was released, wondered if, like Scrooge, “our own heads have not become more inaccessible, our hearts more impregnable, our ears and eyes more dull and blind, to sounds and sights of human misery.”

We can’t help others if we don’t notice their needs. In the 1938 Christmas Carol movie, starring Reginald Owen as Scrooge, the Ghost of Jacob Marley tells Ebenezer, “Each day a man has a thousand chances to make right.” But not if that man doesn’t notice those opportunities.

Finally, we need to notice what’s going on around us to keep us headed in the right direction in our lives. I was sailing in the San Juan Islands off Washington State, deep in conversation with my sailing buddy. Suddenly I realized we were far off course. Why? Tides had shifted, and I had been too preoccupied to notice.

So, too, did the tides shift in Scrooge’s life. Perhaps he could have compensated had he kept his eyes on the headland where he was originally aimed and noticed the shifting tides in his life. But once we lose sight of land, once we can’t see — or won’t notice — where we’re headed, the shoals grow hungry for the catch.

Said Albert Einstein, “He to whom the emotion is a stranger, who can no longer pause to wonder and stand wrapped in awe, is as good as dead; his eyes are closed.”

Excerpted with permission from 52 Little Lessons from A Christmas Carol by Bob Welch, copyright Thomas Nelson.

Are you awake? Are you aware of where you are headed? Do you want to reach the end of life wishing you’d done more for others and been more in touch with the life going on around you? What do you need to wake up to today? How do we need to refocus in order to live the best God-powered and God-directed lives possible? Come join the conversation on our blog. We’d love to hear from you! ~ Devotionals Daily