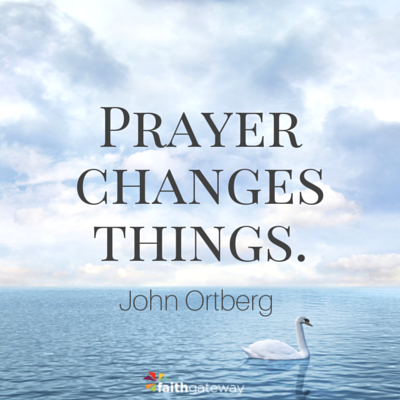 Desperate people pray. They pray without thinking about it; they pray even if they are not sure who they’re praying to or if anyone out there is listening at all. People in foxholes pray. So do people who go through divorce, have children that run away, or hear from a doctor that the lab results say the growth is malignant.

When we reach the limit of our resources, we pray instinctively, reflexively — like the way a man lacking oxygen gasps for breath and the way a man who is falling reaches out for something to grab. It is not bad to pray in a time of crisis.

One of God’s most amazing attributes is that He is humble enough to accept people when they turn to Him in sheer desperation, even when they have been ignoring Him for years.

Desperation prayers have been the beginning of spiritual life for many people. But by themselves such prayers are not sufficient to sustain spiritual life. Many of us fall into a pattern where the only times we pray are the times when we are prompted by crisis or pain; the rest of the time we rely on our own strength and cleverness. This pattern points to what we really believe regarding prayer

In most ordinary moments we are not convinced that prayer really changes things.

Many people believe that their prayers won’t change God’s actions, so they ask themselves what the point is of praying. As Dallas Willard puts it,

“The idea that everything would happen exactly as it does regardless of whether we pray or not is an interrupting heaven specter that haunts the minds of many who sincerely profess belief in God. It makes prayer psychologically impossible, replacing it with dead ritual at best.”

Let’s look at how seriously the writers of Scripture viewed prayer.

In the eighth chapter of the book of Revelation, John describes a scene in heaven after the seals have been broken on the scrolls that tell the story of human sin and violence and God’s judgment. Then a remarkable thing happens. John writes that “there was silence in heaven for about half an hour.” During this time an angel with a golden censer comes to the altar and offers much incense, which is a representation of prayers arising from earth:

The smoke of the incense, together with the prayers of the saints, went up before God from the angel’s hand.

Following this come great acts of judgment on the earth — pictured by rumbles of thunder, flashes of lightning, and great earthquakes. But what is most striking is that these acts come in response to the prayers of the saints.

Usually we think of events on earth being interrupted because of actions taken in heaven. However, here it is the other way around. All of heaven comes to a standstill. The endless songs and praises of heavenly hosts suddenly stop. Why? Because someone is praying. All of heaven stops so the prayers of the saints — your prayers and mine, every one of them — can rise before God. They are heard. They matter.

And what happens next on earth happens because people pray. Walter Wink says that this is the message of John’s text: “History belongs to the intercessors — those who believe and pray the future into being.”

History does not belong to the powerful, or the wealthy, or the rulers, or the armies, or the corporations, or the global media empires. What they do on their own, apart from God, may look impressive for a time. But the day will come when all merely human actions will be tossed, forgotten, on the ash heap of the dead past.

History belongs to the intercessors — to those who believe and pray the future into being.

Interceding is what Jesus is doing now:

“It is Christ Jesus, who died, yes, who was raised, who is at the right hand of God, who indeed intercedes for us.” His teaching ministry lasted three years. His intercessory ministry has been going on for two thousand.

The Bible’s teaching on prayer leads overwhelmingly to one conclusion:

Do you pray out of desperation? Only when it’s an emergency and you need God right here, right now? Why is that? Does it seem like your prayers don’t affect change? Like they don’t always matter? What if you believed that they did impact heaven and impact earth? How would you pray differently? Come join the conversation on our blog! We want to hear from you!