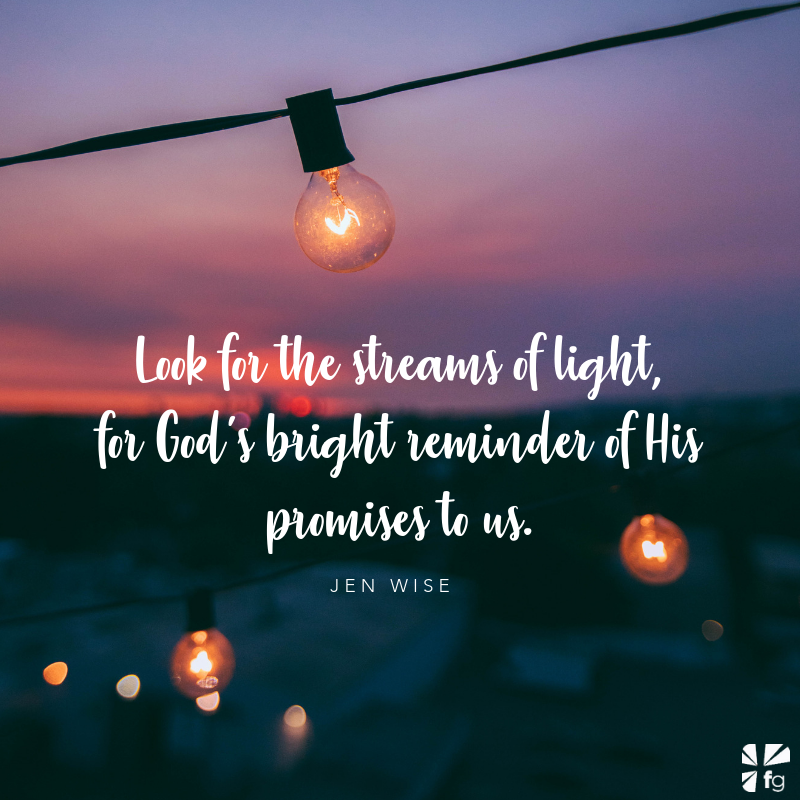 “I hope this is okay — but I asked around and got a recommendation for a doctor for Jon. He’s top in his field in the country. I’ll send the info.”

It was my first text from Sharna. We had about a million mutual friends and were just starting to get to know each other better. Several of us had started to meet here and there for a Bible study, and a core group kind of just clicked.

I hadn’t been a part of a group like this in years, and after our very first week, I realized how much I had missed it. There is just something special about a safe place to open up, friends who encourage you to better things, and also a little weekly kick in the butt to get into Scripture. I needed all three of these things.

Jon and I had been wading through this season, somewhat secretly, for over a year, when I opened up to this group about his health — and Sharna, being Sharna, immediately jumped into action to make connections and help out. I was so grateful.

I passed her text on to Jon, “Call right away.”

He did. It was May. And the next available appointment was mid-August.

So we waited. It was our only option — and if we’d made it this long, we could make it another few months.

Summer arrived and we headed to Traverse City, Michigan — a special beach town oasis where we hide away for most of the summer. I was a jumble of emotions. Summers in Traverse City are one of the highlights of my year. I always look forward to extended time with family, lazy days at the beach, and working my way through the unique cafés and restaurants downtown. This year was extra special because my little sister was marrying her perfect match. Normally, our summer away is a nice breather from ordinary life, but this year, our ordinary life wasn’t so ordinary, and there was no way to leave it behind.

On our way to TC we stopped in Grand Rapids for dinner with good friends. Sitting outside in the cutest, happiest taqueria, laughing and clinking glasses with kindred spirits, we could — for the moment — pretend everything was fine, pretend we were fine. And it felt so good.

But it didn’t last. As soon as we hopped in the car into continue north, reality quickly returned, bringing a host of new complications. Jon’s feet and legs were swelling like balloons. A quick call to the doctor left us with more questions. Was the swelling a new symptom of the unknown condition? Was it a side effect of one of his prescriptions? Or was it heart failure — a possibility based on his combination of medications?

When we pulled into town, Jon dropped me at the little apartment we’d rented and went straight to the hospital. He came home the next morning with the complications cleared, but no new answers. We tried to make the most of our time, but every day was like riding the rough waves of Lake Michigan — ups and downs, free floating for just a moment, and then bowled over.

This all seemed so wrong.

We had worked so hard, given everything we had. And while our life wasn’t perfect, we had found some level of success, some level of what we’d wanted. Sure, we didn’t necessarily want to run so hard forever, but isn’t that what it takes to make it, to land on your feet? So we had put in the time, the effort, and it worked. But just when we thought we had our footing, we’d been swiped out at the legs. It all felt so unfair.

Mid-August came, and we packed up our beach towels, sunscreen, and tennis racquets and headed back to the East Coast. Jon’s appointment was a few days away and I wanted to be hopeful, but felt nervous. All he’d received from doctors so far was a personal pharmacy and terrifying side effects. When there was no improvement from one appointment to the next, the answer was always higher doses, added prescriptions. We’d question the advice, the drugs, but with no other direction, we were at a loss.

When the day of the appointment came, the doctor took in Jon’s medical history. After a year and a half of worsening symptoms, trial-and-error medical treatments, and no answers, we finally got a proper diagnosis. To put it simply, Jon’s body was reacting to years of too much stress and too little rest — too much breaking, too much pouring out, and not nearly enough of being put back together.

Years of stress, with no space for rest and recovery, had all his wires crossed.

His central nervous system was going haywire, and it would take time and intentional change for his body to begin to untangle itself.

Some people are prescribed pills and liquids and shots. Our prescription? Sleep. And yoga. And recreation. And long weekends. And less work, less stress. The doctor pulled Jon off all the meds, which at this point consisted of a handful of pills plus weekly infusions. I’ve never been so happy to say goodbye to something.

For the first time in a long time, we felt hope.

Standing at the bottom of this mountain was daunting — we knew there was so much work to do, that this was a long journey, that we may never reach the peak — but at least we were on the right path.

The next morning, I watched Jon hobble out of bed and put together a gym bag, every laborious movement a window into his pain. His doctor had suggested he start with swimming. It would be painful, but it was gentle on the body. So off he went. It was excruciating. But he went. Every morning, and often again after work. And for a short time after the swim, he’d feel better than he had in a while.

Stroke after stroke, lap after lap, day after day, the slowest and slightest and most painful improvement — but it was there.

Incredibly, it doesn’t matter how dark it’s been, hope is found in the sliver of light that peeks through.

Isn’t that always the way with God? When we’re living in our own mess, lost and exhausted, we see that He’s cracked open a door. Light streaks through; He’s provided a way. We begin to hold a little more tightly to the promise that one day this world will be made right — we will be made right.

First Peter 1:3-5 (MSG) invites us into the light, into the hope we’ve found, the promise He’s made to see us through.

What a God we have! And how fortunate we are to have Him, this Father of our Master Jesus! Because Jesus was raised from the dead, we’ve been given a brand-new life and have everything to live for, including a future in Heaven — and the future starts now! God is keeping careful watch over us and the future. The Day is coming when you’ll have it all — life healed and whole.

A life healed and whole. We want that with everything in us, right? Friends, it’s coming. It may be a slow climb, but this future, this brand-new life, it’s a promise, and it starts now.

Can you see it? Can you find the light peeking through? Even when everything seems wrong, broken. Even when we feel tired, worn down. God’s promise to heal us and set things right still stands and He graces us with reminders of this truth if we have eyes to see it. Let’s drop the worry and look for the streams of light, for God’s bright reminder of His promises to us.

LOOKING INWARD: Are you able to see light peeking through the darkness? Can you hold on to God’s promises, even when life is tough, the climb is slow? What encourages you? What makes it difficult to have faith?

LOOKING UPWARD: God has given us brand-new life, and the promise of completing His work in us and our world — of a life healed and whole. Thank Him for this. Meditate on it. Rest in it.

LOOKING OUTWARD: The future starts now. What can you do today to live into the healed and whole life we’re promised? What small step is God calling you to take?

Excerpted with permission from The Bright Life by Jen Wise, copyright Jen Wise.

In the middle of whatever darkness you are facing, do you see the Light of Jesus peeking through? Do you see that God is making a way for you? Come share with us on our blog. We want to hear from you! ~ Devotionals Daily