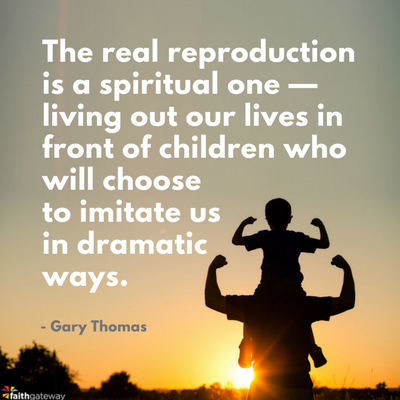 Spiritual impact is by no means directed solely by biology.

On the contrary, many adoptive fathers and stepfathers have had far more impact on their children’s lives than the children’s biological fathers.

One mother told me of the time her husband and their adopted son went to a Promise Keeper’s rally. One of the speakers asked all adoptive fathers to stand up. At first the father stayed seated. As his wife explained, he had all but forgotten that his son was adopted — they even physically resembled each other — but then he finally remembered and stood up. His son looked at him and thought, Why is my dad standing up? until he too remembered that he had been adopted. Afterward, father and son had a good laugh about how both of them had made the same mistake. They could say with all sincerity, “Like father, like son.”

Although we can reproduce children who look like us in a single act of sexual intimacy, the real reproduction is a spiritual one — living out our lives in front of children who will choose to imitate us in dramatic ways.

Early one spring when Graham was just four years old, I was teaching him to play tennis. In Virginia a spring day can get hot. I was mindful that swimming season would soon be upon us, so I thought I might take off my shirt to let myself tan a little. After a long winter, my skin gets roughly the color of fluorescent white. As a Christian courtesy to those who might forget to bring their sunglasses to the pool, I thought some bronzing could benefit everyone around me.

“Why are you taking off your shirt, Dad?” Graham asked. “I’m just a little hot,” came my simplified answer. Instantly I heard his racket drop to the ground. “I’m hot too,”

The following Sunday, as Graham and I sat side by side in church, the pastor began reading from the book of Romans. I flipped open my Bible and followed along. When the pastor had finished reading, I laid the open Bible beside me and listened to the sermon. A few minutes later, I glanced down at the chair next to me and saw not one but two open Bibles. Graham had carefully laid his Bible out too, at the same angle as mine. Even though he couldn’t yet read, Graham brought his Bible to church, just like Daddy did. And when Dad left the Bible open, Graham did too.

The next day, Monday, was a holiday. I replaced a turn-signal bulb on our station wagon and, without thinking, cleared my throat and spit off to the side.

“Why’d you do that?” asked Graham, who was “helping” me. “I don’t really know,” I said. “Sometimes a guy just needs to spit.” Less than five seconds later, I heard Graham clear his throat, turn his head, and — you guessed it — spit off to the side.

Later that evening, we decided to conclude the weekend with a walk on a nearby battlefield (at the time we were living in Manassas, Virginia). Graham couldn’t find his shoes.

“You look upstairs,” I told him, “and I’ll look downstairs.”

As soon as I reached the landing and looked down, my heart skipped a beat. In the middle of the floor (just where my wife loves me to leave them), I had taken off my shoes and forgotten them. About six inches from my shoes lay Graham’s little tennis shoes, placed right next to mine in the middle of the floor, mimicking the same angle at which my shoes had been dropped.

This boy was studying me. Every move I made was being watched. Every word I chose, every time I did something without even thinking about it, Graham was watching me and coming to the conclusion, This is what I’m supposed to do, because that’s what my daddy does.

I began praying a sober prayer:

Please, God, change me. If I’m going to have this much impact on another human being, there are quite a few things I need you to clean up so I don’t pass them on.

Former National Football League quarterback Archie Manning remembers how his son Peyton — who also became an NFL quarterback — mimicked so many of his dad’s mannerisms as he grew up that it felt almost eerie. Peyton listened to old broadcasts of Archie’s playing days and would mutter them under his breath: “Manning of Drew rolls right—throws to Franks of Biloxi!” In the seventh grade, the first season Peyton started playing organized football, Archie was shocked to see his son walk bowlegged out of the huddle. Peyton wasn’t naturally bowlegged; that funny walk was his imitation of his dad—the result of watching so much film.3

To be a parent is to make an impression. There’s no doubt that parenting, at least in the early stages, has a bit of a “Xerox” feel to it. The only difference — and what a huge difference — is that we don’t reproduce paper; we reproduce human character.

This is a serious call and challenge to all fathers and mothers. Because we feel secure in our trust in the finished work of Jesus Christ, we sometimes take our continued growth in holiness for granted. Our unconscious thinking goes like this: I know getting into Heaven isn’t a matter of my morality, and of course I’ll repent of any major sin I fall into, so what’s the big deal if I tolerate a few bad habits?

Well, the Bible makes spiritual growth a very big deal. In fact, Peter tells us we should “make every effort” to add to our faith “goodness; and to goodness, knowledge; and to knowledge, self- control; and to self-control, perseverance; and to perseverance, godliness; and to godliness, mutual affection; and to mutual affection, love” (2 Peter 1:5–7).

Think about that phrase “every effort.” Every effort looks nothing like the casual trot of Barry Bonds as he ambles toward first base while “running out” a fly ball he knows will be caught. “Every effort,” rather, recalls Ichiro Suzuki as he barrels toward first base trying to beat out an infield grounder. That’s the kind of exertion to which Peter calls us spiritually as we add to our faith. According to him, being lazy about increasing in these virtues is to be “nearsighted and blind” and to forget that we have been cleansed from our past sins (2 Peter 1:9).

If heaven doesn’t give us the motivation to make every effort, perhaps having kids will. If we don’t seek to add to our faith in this aggressive manner, Peter warns that we will be “ineffective and unproductive” in our “knowledge of our Lord Jesus Christ” (2 Peter 1:8). In other words, it’s possible to become an unfruitful, unproductive Christian. We may get to heaven, but we’ll arrive with an empty shopping basket, with no fruit to offer our King.

So often, we parents decry the bad examples passed down by politicians, the lewd messages coming out of Hollywood, the destructive plotlines of popular television shows, and the obscene lyrics of modern music — but Peter challenges us to look not at Hollywood, New York, or Washington, D.C., but to the hearts of believers to see if they are truly making “every effort” to add to their faith the virtues Scripture calls us to practice. If we are not, we have only ourselves to blame when the church seems ineffective and unproductive.

Christ’s cross-won forgiveness doesn’t mean God excuses us from growing in righteousness; it means He frees us from being self-centered as we do so! Growing in godliness is not about trying to achieve heaven but rather about leaving an authentic example for others to follow — beginning with our children.

As parents, what an important privilege we have to model for our kids what godly manhood and womanhood looks like! Which of your kids’ traits to you notice and smile about because they came straight from you? Come share with us on our blog!