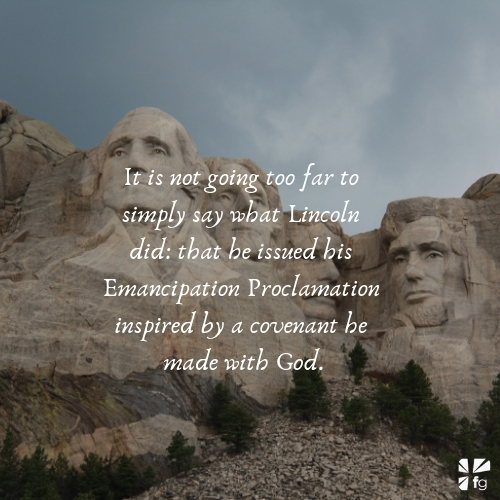 In the fall of 1862 Lincoln was baffled by the odd course of the war and by the reason an all-powerful God did not grant victory to one side or the other. Indeed, why had God allowed the war at all? These questions were the start of a broader understanding of the conflict in Lincoln’s mind. We can see this just surfacing in his “Meditation” from phrases like “God’s purpose is something different from the purpose of either party” and “God wills this contest, and wills that it shall not end yet.”

Lincoln was beginning to conclude that God was about something else. But what was it?

It certainly was beyond mere victory for North or South. Perhaps, he was beginning to believe, God was about removing the scourge of slavery from the land and pouring out judgment on both sides for the nation’s sinful treatment of Africans.

Obviously, he drew his conclusions quickly. He had written his “Meditation on the Divine Will” the first week of September. Two weeks later, when Union troops drove Lee’s army into retreat at Antietam Creek on September 17, Lincoln had already begun a plan to appease what he was just beginning to understand as God’s will for the war. In fact, the victory at Antietam was the signal from God he had been waiting for, the sign that it was time to begin. At a cabinet meeting on the twenty-second, he explained what he was about to do. Salmon Chase, secretary of the Treasury, recorded the moment in his diary.

Gentlemen, I have, as you are aware, thought a great deal about the relation of this war to Slavery; and you all remember that, several weeks ago, I read to you an Order I had prepared on this subject, which, on account of objections made by some of you, was not issued. Ever since then, my mind has been much occupied with this subject, and I have thought all along that the time for acting on it might very probably come. I think the time has come now. I wish it were a better time. I wish that we were in a better condition. The action of the army against the rebels has not been quite what I should have liked. But they have been driven out of Maryland, and Pennsylvania is no longer in danger of invasion. When the rebel army was at Frederick, I determined, as soon as it should be driven out of Maryland, to issue a Proclamation of Emancipation such as I thought most likely to be useful. I said nothing to any one; but I made the promise to myself, and (hesitating a little) — to my Maker. The rebel army is now driven out, and I am going to fulfill that promise.1

According to F. B. Carpenter, the artist commissioned to paint Lincoln deliberating with his cabinet over the proclamation, Chase told him that the president had dropped his voice just at the moment he mentioned his promise to God. Chase asked if he had heard correctly. Lincoln replied, “I made a solemn vow before God, that if General Lee was driven back from Pennsylvania, I would crown the result by the declaration of freedom to the slaves.”2

Gideon Welles was also at this meeting and, like Chase, wrote of it in his diary.

In the course of the discussion on this paper, which was long, earnest, and on the general principle involved, harmonious, he remarked that he had made a vow, a covenant, that if God gave us the victory in the approaching battle he would consider it an indication of Divine will, and that it was his duty to move forward in the cause of emancipation. It might be thought strange, he said, that he had in this way submitted the disposal of matters when the way was not clear to his mind what he should do. God had decided this question in favor of the slaves. He was satisfied it was right, was confirmed and strengthened in his action by the vow and the results.3

It would be easy to make too much of this, but perhaps it is just: historians have long made too little of it. While declaring Lincoln a lifelong religious skeptic, they have ignored dramatic moments such as this one, in which Lincoln’s ever-deepening faith decisively shaped the course of the nation.

It is not going too far to simply say what Lincoln did: that he issued his Emancipation Proclamation — an act he considered one of the crowning achievements of his life — inspired by a covenant he made with God.

That covenant, in turn, was possible only because Lincoln had moved from believing in God as angry father to rejecting God as myth, and then had progressed from thinking of God as the kind of being who cursed a man for his parentage, to accepting God as ruler of the world, and finally to honoring God as a good and covenant-keeping Father of all men. None of this made him arrogant about his decision, though. Two days after that historic cabinet meeting, he told an audience, “I can only trust in God I have made no mistake.”4

The Emancipation Proclamation signaled something even more profound in Lincoln’s life. He had come to understand history as orchestrated by God, nations as accountable to Him, and men as the means by which God fulfills His will. In this light, Lincoln no longer thought of the war as a contest between North and South alone. He began to accept that this war was the result of a controversy between God and the United States. Righteousness — right standing with the Ruler of Nations, with God the Father — not just military victory, was the need of the hour. Lincoln told one minister during the war, “God only knows the issue of this business. He has destroyed nations from the map of history for their sins. Nevertheless, my hopes prevail generally above my fears for our Republic. The times are dark, the spirits of ruin are abroad in all their power, and the mercy of God alone can save us.”5 This is why, soon after that, he famously said that his concern was not whether God was on the side of the Union, but rather whether “this nation should be on the Lord’s side.”6 For Lincoln, the Civil War had ceased being just a war: it was an act of judgment by an offended God — an act of judgment on the nation as a whole.

Given what we have seen of Lincoln’s ever-deepening faith, it is not difficult to accept the testimony of Major General Daniel Edgar Sickles, commander of the Third Corps of the Union army, about a conversation he had with the president following the battle of Gettysburg.

Sickles lost his right leg on the second day of that great battle and was immediately moved to Washington to recuperate. At three o’clock on Sunday afternoon, July 5, Sickles was smoking a cigar and battling the pain in his stump at a house on F Street across from Ebbitt House when a member of his staff, Lieutenant Colonel James Rusling, dropped by for a visit. The two had just greeted each other when Abraham Lincoln walked in.

The president tenderly asked about Sickles’s wounds and then questioned the general about the fighting at Gettysburg. When Lincoln was satisfied, Sickles asked his commander in chief how he felt during the three days of fighting in Pennsylvania. Sickles had heard there was great fear in Washington and wondered if Lincoln had experienced it too. The answer was not what Sickles had expected, and we should be grateful that Lieutenant Colonel Rusling was there to write down what followed.

In the pinch of your campaign up there, when everybody seemed panic-stricken, and nobody could tell what was going to happen, oppressed by the gravity of our affairs, I went into my room one day and locked the door and got down on my knees before Almighty God and prayed to Him mightily for victory at Gettysburg. I told Him this was His war and our cause, His cause, but that we couldn’t stand another Fredericksburg or Chancellorsville. And I then and there made a solemn vow to Almighty God that if He would stand by our boys at Gettysburg, I would stand by Him. And He did, and I will. And after that, I don’t know how it was and I can’t explain it, but soon a sweet comfort crept into my soul that things would go all right at Gettysburg, and this is why I had no fears about you.7

Sickles was surprised by Lincoln’s response and wanted to probe further. A battle loomed at Vicksburg, Mississippi, and Sickles decided to see if the president had the same sense of victory about it that he’d had before Gettysburg. The president replied, “I’ve been praying over Vicksburg also and believe our Heavenly Father is going to give us victory there too because we need it in order to bisect the Confederacy and have the Mississippi flow unvexed to the sea.”8

Lincoln knew how he sounded and concluded the interview with a bit of encouraging humor. “General, you will get well.” Sickles objected and waved Lincoln off with a grunt. The president wouldn’t back down: “I’m a prophet today and I say you will get well, and that we will have glorious news from Vicksburg.” With this, Lincoln departed.

Neither man knew that Vicksburg had already fallen to General Grant the day before.9 And Lincoln was right: Sickles got well — and lived until 1914.

It is in these documented, confirmable deeds that Lincoln’s faith is best revealed. He had become a man who prayed in secret that the God of Battles would grant victory to the beleaguered Union and one who knew the matter was settled when “sweet comfort crept into” his heart. He had become a man who made covenants with God and trusted that divine confirmation of these covenants should signal events even as momentous as the signing of the Emancipation Proclamation. He had become a man who instinctively grasped for deeper faith in God during seasons of suffocating grief, as he did in the tortured season following Willie’s death. These deeds speak of the man and they reveal in an unarguable manner how Lincoln’s ever-evolving faith shaped the course of America.

Today is President’s Day in the United States… a perfect day to pray for our presidents and national leaders. Romans 13:1 says that it is God who puts men and women in positions of power and authority so we can trust that He will do what is good. But, we can pray for our leaders to accept Jesus as their Savior and follow His Word! Come share with us who you are praying for today. We want to hear from you! ~ Devotionals Daily