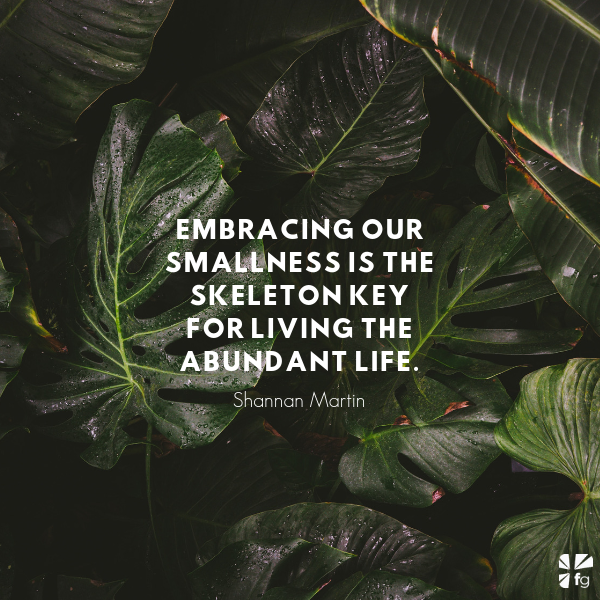 Jesus is often in the last place I want to look but the very place He always said He would be — in the whisper, in the children, in the small and secret places. ~ Simply Tuesday, Emily P. Freeman1

“I can’t stop thinking that if I make this move, I might never regain my footing. I might lose my connections. It would be a permanent step backward,” he said.

Instinctively a response tumbled from my mouth. “Every turn we’ve taken lately has been a step backward.”

And there it was, the truth neither of us had wanted to hear. The one that freed us to continue on the under-arc of reason.

He laughed, because I was right. Then he went ahead and became the blue-jeaned, bearded chaplain of the county jail.

Smallness Is a Choice

Here’s a reality check: we take up precious little square footage in the scope of God’s great kingdom. Of all the facets of our faith, this might be one of the more difficult to grasp. It’s also one of the most central.

We know somewhere up in our heads that the whole point of life is to reflect God’s glory by becoming more like His Son. The how-to manual is right in front of us. But honestly, we’re just not that into what it has to say about our stature in this world. The Jesus way of humility doesn’t align with our self-made gospel of achievement, and we’re willing to sell our souls at the corner of trying to have both.

What if, instead, we simply let go?

That’s the unfancy Gospel we’re called to, to open our hands and fall; to cultivate a deep love for low places; to stop elevating ourselves as anything other than poor and needy.

You must have the same attitude that Christ Jesus had. Though He was God, He did not think of equality with God as something to cling to. Instead, He gave up His divine privileges; He took the humble position of a slave and was born as a human being. When He appeared in human form, He humbled Himself in obedience to God and died a criminal’s death on a cross.

Jesus shed Heaven and descended into the muck of earth, where all its inhabitants were jockeying for more clout, more esteem, more money, more power, more respect, more, more, more. He walked away from perfection in order to be a friend and neighbor to damaged goods.

Paul says Jesus took the position of a slave “and was born as a human being.” It’s worded as though it was a remarkable choice, because it was. By leaving the physical presence of God, walking away from absolute holiness and a sweeping absence of darkness in order to move “into the neighborhood” (John 1:14, The Message) of soul-poverty and hearts that had lost their way, His intentions were clear. He didn’t cop to our “smart” standards of behavior. He didn’t stick to the script when it came to social strata, class systems, and acclaim. He essentially showed up and demolished our regime.

That He came to be with us when He could have kept His post at the right hand of God should send us running breathless into every busted-up city, every barred-up shack, every cave, every cell, every pain-drenched street corner we can find in order to bring the good news.

Instead we react exactly as expected, threatened by His choices and defensive over the way they cast shadows on our own. We want an out so dang bad. The company He kept and the way He valued nothing but relationships and eternity have us scrambling for an excuse to keep zipping through life with our shades on.

Christ chucked His status in order to walk with the forsaken, and I can’t be bothered to invite them over for a cookout.

Imagine the lowest social position possible today. My mind goes to a homeless woman, addicted to meth, estranged from her children and parents, abused, easy, and uneducated, with broken teeth and a face full of shaky tattoos bartered from the guy in apartment 2B. This person I’m conjuring up certainly exists, and she lives somewhere within a twenty-mile radius of where you’re sitting right now. I promise. Her life is uncomprehendingly difficult. She’s judged and demoralized from every side, not given the time of day, never respected. We speak slowly to her, if we speak at all. We don’t owe her eye contact or anything else. Maybe we pity her. Maybe we feel a hollow pang of guilt. But she chose this mess she’s in, we say. She made her bed.

Jesus chose to show up on our lowest rung of social hierarchy as a squirming babe, painting a clear picture of His subversive take on status. An equivalent for us might be to scrap our air-brushed lives in order to take on the life of the woman we just imagined, then live it with her. He came in the form of us, living a life similar to ours, but He also came to live with us.

This central act of with-ness set the stage for the incarnation of Christ — you and me wearing His love like a shawl, sacrificing our own comfort to lay it warm against another. This is no accident, and we’ve got to pay attention.

Embracing our smallness is the skeleton key for living the abundant life.

This is the hope we’ve been given.

Living small is not about having less, but being less — less respected in the eyes of the world, less successful, less wealthy, less esteemed, less you. Less me. And more Jesus. Here, in this abundance of less, where more of us is stripped away, we’ll uncover the person we were made to be, the one created in the image of a God who sank holy feet into our human mess.

Your son is dying? Lower him down. You want to see Me? Climb down. You say you love Me? Fall down.

Weak is strong, small is big, and less has most definitely always been more.

Go ahead and sigh, because it turns out we weren’t made for world domination or national notoriety. We are small. We were not made for greatness, and our positioning inside the framework of forever is sort of irrelevant. The God of the universe, the only one who can break our chains, is calling us down.

Enjoy this special bonus devotion by Shannan Martin excerpted from her new book, The Ministry of Ordinary Places.

In this self-absorbed, narcissistic world, we Christians are called to the absolute opposite. We’re called to be lowly. Humble. Small. Downwardly mobile. Just like Jesus. Come share your thoughts with us on our blog. We want to hear from you! ~ Devotionals Daily