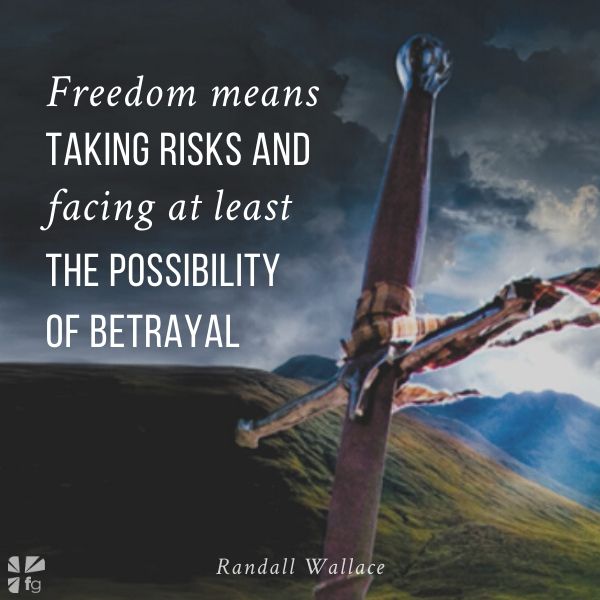 Editor’s Note: More than twenty years ago Braveheart captured the hearts of moviegoers around the world. The film was nominated for ten Academy Awards, winning five.

If you love Braveheart, you are an explorer for the pathways of faith and courage. I find there is no brave man or woman nor anyone who lives by faith and love who doesn’t long for a deeper experience with that kind of courageous life. I hope Living the Braveheart Life will inspire you to a deeper adventure. — Randall Wallace

William Wallace, in Braveheart, is betrayed by the nobles of Scotland, and in the legends surrounding William Wallace — at least according to the guard at Edinburgh Castle who first told me some of those legends — even Robert the Bruce is somehow implicated.

It was obvious to me that if the historical facts really went this way, then the man I’ve always imagined was my ancestor — and therefore, in the reasoning of my soul, like me — had to have felt a staggering sense of betrayal. One of the most shocking and powerful scenes in the movie is the scene on the battlefield when Wallace rips the helmet off a man sent by Edward Longshanks to kill him and discovers it is Robert the Bruce himself; the pain Mel Gibson portrayed in that moment is something everyone in the audience recognized — and could relate to.

The awful experience of having chosen the wrong course through fear, greed, lust, or any of our other natural weaknesses is made far worse by the realization that in doing so we have left someone else in a terrible situation. The feeling that we have been betrayed ourselves may feel even worse, though it would be hard to say that it’s worse to be the betrayed than to be the betrayer.

In either case, part of what betrayal generates is a profound aloneness.

To be betrayed is to be left alone.

But as Robert the Bruce discovers in Braveheart, betraying produces the same isolation.

William Wallace suffers because of the betrayal of Robert the Bruce and the other Scottish nobles. All of his hopes are shattered; all of his efforts — or so it seems at the moment — become dust. Many of his friends have died because of the betrayal, along with many more of the people Wallace had inspired in the struggle for Freedom.

As I reflect on this now, part of the heroic journey William Wallace makes in Braveheart is to experience exactly such a horror. Freedom means taking risks and facing at least the possibility of such betrayal, if not the full reality of it. A slave remains in bondage always, but the free person risks betrayal.

Nowhere does this dynamic leap out more forcefully than in relationships of the heart. We think of the single person as free and speak of marriage as if it is the surrender of freedom, but surely marriage could offer a new and greater level of freedom, the kind that comes with companionship and confidence and commitment.

But it also brings the possibility of betrayal.

When I was in a college writing class, the professor asked us freshmen to write down what we thought was the greatest betrayal. Most of us imagined that it would be the betrayal of adultery. Our teacher said he thought it was not the sexual infidelity of one partner in a relationship but rather their suicide because it was the abandonment without any possibility of a discussion about why.

William Wallace is betrayed. He feels the devastation of it. He feels the anger, surely, because after a time of reflection he returns in retribution and vengeance.

If the story ended there, it would be typical of most tales. I once was on a plane trip with a man who had headed several Hollywood studios and had become a prominent producer. He was a fascinating and in many ways delightful rogue. On that trip he said, “You wanna know what a story is? I’ll tell ya! Somebody kills something you love — your wife, your kid, your dog. Then you kill him! Now that’s a story!” Most Hollywood stories are that and little else.

But some stories explore what growth is, and I believe Braveheart does. William Wallace realizes that he can keep fighting forever and that he may win some battles and may lose some, but nothing fundamental will change. He must change himself, and he must get others to change.

If you know the story of Jesus, does this sound familiar?

Jesus taught His disciples for three years. He chose them, lived with them, and showed them everything possible to show: miracles, lessons, visions. He told them what would happen, and the future unfolded exactly as He foretold. And yet, at the ultimate moment, all of them betrayed Him.

I had wondered before, and as I wrote Braveheart I wondered again, whether Jesus had any sort of spiritual crisis as He realized the disciples would betray Him. He knew they would; He told Peter to his face that he would become an utter coward and deny three times that he even knew Jesus after Peter boldly, and apparently courageously, declared that he would never abandon Jesus — yet at the time that it mattered, Peter did exactly that.

Jesus knew that Transformation is possible.

I believe that’s what we have to remember when we experience betrayal — from either side.

A friend of mine recently went through a horrible divorce. Her husband became violent and vengeful, though by everything that anyone knew, he was the one who deserved anger and banishment. He accused his wife of all the things she was innocent of but he had done himself. He was a lawyer and used the court system to attack her repeatedly, even though each time the courts ruled in her favor.

Recently he tried again to use the courts against her, and she was facing an awful trial. I suggested that there might be something good in the process, and she looked at me as if I had gone insane.

I told her the experience might allow her to transform. When a relationship falls apart, we feel savage guilt. In her case the guilt involved the sense of responsibility of having chosen the wrong person. My hope was that the awful experience of seeing her husband’s full hatred would bring her to the Transformation of letting go of the baggage she carried.

Bonus: Our Favorite Quotes from Braveheart

Young William: I can fight.
Malcolm Wallace: I know. I know you can fight. But it’s our wits that make us men.

William Wallace: Aye, fight and you may die. Run, and you’ll live… at least a while. And dying in your beds, many years from now, would you be willin’ to trade ALL the days, from this day to that, for one chance, just one chance, to come back here and tell our enemies that they may take our lives, but they’ll never take… OUR FREEDOM!

William Wallace: We all end up dead, it’s just a question of how and why.

William Wallace: There’s a difference between us. You think the people of this country exist to provide you with position. I think your position exists to provide those people with freedom. And I go to make sure that they have it.

Malcolm Wallace: Your heart is free. Have the courage to follow it.

Robert’s Father: At last, you know what it means to hate. Now you’re ready to be a king.
Robert the Bruce: My hate will die with you.

William Wallace: Every man dies, not every man truly lives.

May the Lord direct your hearts into God’s love and Christ’s perseverance. — 2 Thessalonians 3:5

Have you experienced that kind of transformation — the kind that comes from the extreme pain of betrayal from a trusted loved one or friend? What happened? What good did the Lord bring out of it? Come share with us on our blog. We want to hear from you about how love transforms.

We’d also love to hear your favorite quotes from Braveheart! What are your memories of this movie and how has it made a difference in your life? Share your stories!