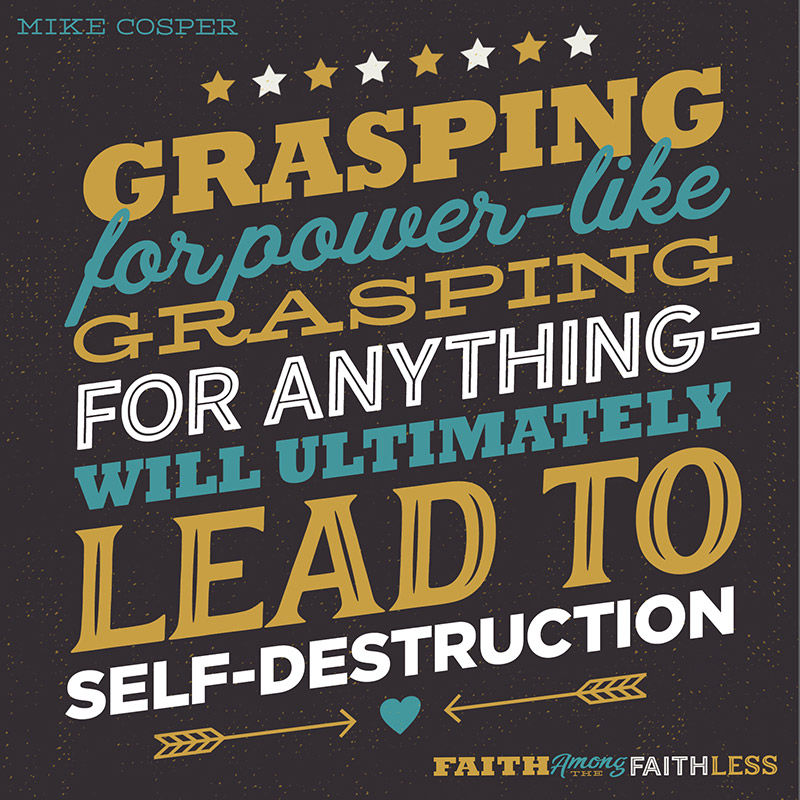 Living with Power and Weakness

It’s part of our nature as image bearers that each of us is given a certain amount of power. The way we relate to power, both in ourselves and in those around us, has profound effects on our witness and on our souls.

At a minimum, each of us has power over our own thoughts and actions. There are a myriad of hierarchies of power that shape the way the world is governed – the power dynamics within a family, within the marketplace, and within global, politic powers. At its best, power can be used to work for justice, to govern the world peacefully, and to protect the innocent. At its worst, it is one of the most destructive things in the world.

The book of Esther is a fascinating study of power – both for its redemptive use and its corrupting use. The central figure who embodies power is not the King, but is his vizier, Haman the Agagite. When we meet him in Esther chapter 3, he’s just been enthroned as vizier and the whole Kingdom has been ordered to bow to him. But one person refuses:

All the royal officials at the king’s gate knelt down and paid honor to Haman, for the king had commanded this concerning him. But Mordecai would not kneel down or pay him honor.

Then the royal officials at the king’s gate asked Mordecai, “Why do you disobey the king’s command?” Day after day they spoke to him but he refused to comply. Therefore they told Haman about it to see whether Mordecai’s behavior would be tolerated, for he had told them he was a Jew. — Esther 3:2-4

It should be stated up front that Mordecai is no saint, at least not up to this point. He’s lived a compromised life in Persia, living with a Persian name and raising his cousin with no regard for Jewish law. (see Esther 2:9-10) But when Haman is made vizier, something in him awakens, and he refuses to bow. 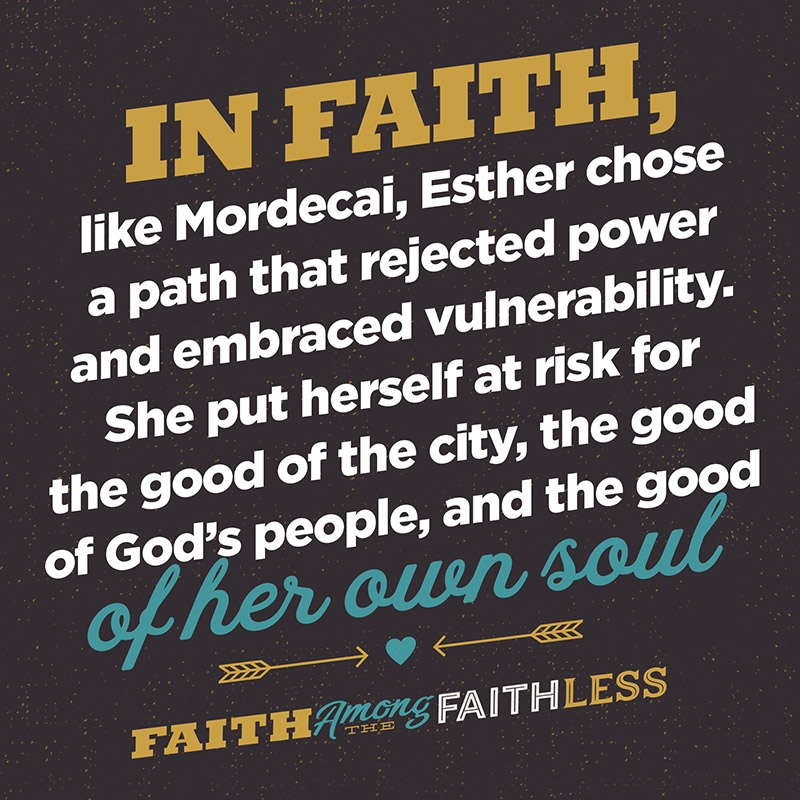 We need to zoom out for a moment to make sense of this. The story is marching towards an attempted genocide of the Jewish people, driven by this Agagite. Agag was the King of the Amalekites, one of Israel’s most long-standing and antagonistic foes. Knowing that Haman is an Agagite ties him to a war against the Jews that goes all the way back to the Exodus, when they were the first to attack Israel in the desert.

Moses, in the book of Deuteronomy, warns Israel not to forget the horrors the Amalekites inflicted on them:

Remember what Amalek did to you on the way as you came out of Egypt, how he attacked you on the way when you were faint and weary, and cut off your tail, those who were lagging behind you, and he did not fear God. Therefore, when the Lord your God has given you rest from all your enemies around you, in the land that the Lord your God is giving you for an inheritance to possess, you shall blot out the memory of Amalek from under heaven; you shall not forget. — Deuteronomy 25:17-19

In Jewish tradition, the book of Esther gets read every year at a festival called Purim. During that celebration, this passage gets read before they read Esther. It explains the animosity of Haman towards Mordecai in particular and Jews in general.

Israel first faced the Amalekites shortly after receiving the Law at Mt. Sinai. The Amalekites attacked Israel from the rear, killing the stragglers, the weak, the sick, women and children. They were terrorists, seeking to demoralize the Jews long before engaging in direct conflict. One doesn’t have to think hard to find parallels today, in those who target innocents in order to demoralize their enemies. It’s a win-at-all-costs approach to power.

Yoram Hazony writes, “We have no idea what gods ruled over the Amalekites. None are named, and for all we know, there may have been none at all. What we do know is that whatever gods may have belonged to Amalek, as a people they did not fear any moral boundaries established by them. Unlike even the most depraved of the idolaters of Canaan, they respected no limits on their desire to control all as they found fit.⁠1

Mordecai’s refusal to bow isn’t just a rejection of Haman, and it isn’t just a symbol for the generations-long conflict between Israel and Amalek. It’s a rejection of this kind of win-at-all costs approach to power; it’s a rejection of the idol of power. It’s also a moment of spiritual awakening for Mordecai, a moment where he could compromise no further. Suddenly, he found himself living in a world that was bigger than the court, bigger than Susa, bigger than Persia itself. He was suddenly caught up in the story of God and Israel, and in that world, he cannot bow. “Because I am a Jew,” he says.

It is courageous, but it is an act of extreme vulnerability. And it’s utterly consistent with the Biblical witness to both power and weakness: Abraham leaves aristocratic life in Ur for a nomadic life. Moses sacrifices his position and power in Egypt to defend a slave being beaten, shedding blood. Eventually he returns and makes himself even more vulnerable, asking for Israel to be freed. David faces Goliath not in strength, but weakness. And then, of course, there is the incarnation itself, the ultimate act of vulnerability, the ultimate moment when someone laid down their power and authority for the sake of others.

Power doesn’t have to be murderous to be abusive. It is dangerous almost the moment it becomes self-serving. If I believe that whatever power I have is meant to serve my comfort, my prosperity, and my well-being, without regard to the world around me, then the spirit of Amalek is beginning to well up within me. People become means towards ends, rather than ends in themselves. I exploit; I do not bring life to the community around me.

Living this way accumulates “collateral damage,” which in war, means the death of innocents. In business, it means burned out employees and co-workers, embittered ex-clients, and broken laws. In our homes, it’s lonely spouses and children, families starved for love and attention, an ecosystem that learns to tiptoe around someone’s wrath.

The scriptures, on the other hand, invite us to a self-emptying approach to power. What power we have, if we are to walk in the footsteps of Jesus, is meant to be put to use for the sake of others. For the weak and the vulnerable. For the good of our cities and homes. For the lost. For the wounded. We are called to be a light, and light goes to the dark places of the world and illuminates them.

Haman’s response to Mordecai ends up being the source of his own demise. His lust for power is so offended by Mordecai’s resistance that he sets in motion a series of events that almost lead to the complete destruction of the Jewish people… almost. In the end, though, he is killed on a gallows of his own making, and the Jews are saved. Here too is an important lesson on the dynamics of power: when it becomes the thing you worship and long for most, it will end up destroying you.

As compromised as Mordecai was, he came to a place where he could compromise no more. He awakens to his identity as a Jew, and embraces it publicly as part of a protest against the idolization of power. “Here,” he says, “I can go no further.”

This is our call as well. When the world around us enshrines power in politics, business and celebrity, we’re to join Mordecai and refuse to bow. When we’re tempted to use our power to overwhelm those around us, we’re called to resist, and to use that power for the sake of others. Power itself is a good thing; it’s a gift from God meant to help bring order and justice to the world. But only when we order it rightly – only when we refuse to worship it – can we see and enjoy its benefits in our lives.

Adapted devotion for Devotionals Daily by Mike Cosper, author of Faith Among the Faithless.

If you’ve ever found yourself idolizing power or a power position and wanting it more and more and more, you’ve probably found it burn to ashes, too. God built us to worship Him and Him alone. How have you seen power work beautifully in the world around you? For justice, or peacefully governance, or protection of the innocent? Come share with us on our blog. We want to hear from you! ~ Devotionals Daily