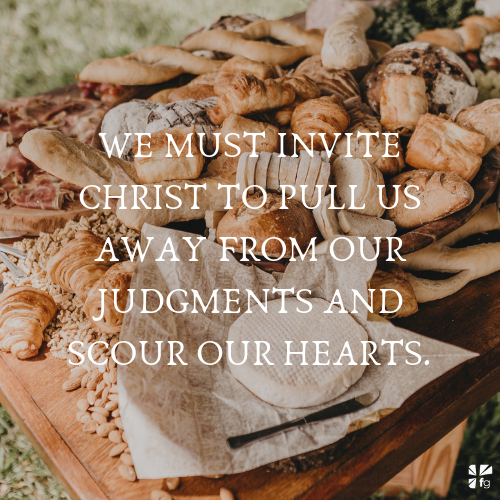 I peer through the oven’s glass window, coated with splatters from past meals, to assess the bread baking inside. More than anything, I don’t want the bread to rise.

I wish I knew more about the finicky nature of this particular range, but this isn’t my stove. This isn’t even my kitchen. I’ve traveled from Utah to Connecticut to try my hand at unleavened bread.

When I launched my baking expedition to explore bread in the Bible, I looked for local bakers to deepen my understanding of bread and its rich imagery throughout Scripture. One chef led to another, and soon I scoured a variety of resources on how this particular food rose to prominence throughout history.

Somewhere along the way, I stumbled on a resource by Andrew McGowan, the dean of Berkeley Divinity School at Yale University and knew he would be the very best guide. He’s both an Episcopal priest and an expert on ancient bread making. Jackpot!

With Ido-inspired chutzpah, I invited myself to visit the prestigious Ivy League campus and spend an afternoon baking in his kitchen. He graciously accepted my request, and before I knew it, I found myself at Yale.

At first glance, Andrew looks like a fine-art auctioneer at Christie’s. Untamed salt-and-pepper hair grazes his shoulders. Mod glasses frame his wise owl-like eyes. Yet it’s the puff of flour on his tie that’s impossible to ignore. I have a suspicion that he isn’t a typical seminary professor, and my hunch is confirmed when he leads me into the kitchen of his campus home.

Instead of cabinets, cherry-red shelves line the pale walls. They are stocked with my all-time favorite brand of spices. A whimsical white tea kettle with black polka dots rests atop the stove. Unlike my unkempt kitchen, Andrew’s appears tidy with every item assigned to its proper place.

The centerpiece of the kitchen is an oversized wooden countertop designed for baking with a lower-set edge and a plastic barrier to prevent runaway flour. I follow Andrew to his personal treasure vault: a pantry stuffed with eclectic flours from around the world.

“I collect flour like some collect power tools,” he says with a gusty laugh.

Andrew scans the labyrinth of ground grains to select the ingredients for today’s culinary adventure. He gathers several flours and cradles them in his arms like infants. Then we return to the kitchen and I pull up a stool to his baking table.

“We’re going to make authentic matzo like the Israelites ate,” Andrew announces. “From the start to out-of-the-oven, we have only eighteen minutes.”

How to Avoid the Leaven of the Pharisees (Hint: You Can’t)

I know unleavened bread is a Jewish staple that commemorates the night when God instructs the Israelites to flee Egypt at lightning speed. It’s said that they left in such a hurry that they could not wait for bread dough to rise. But why only eighteen minutes?

Andrew explains that a basic mixture of water and flour rises, or leavens, on its own with enough time.

Centuries ago, a pair of rabbis debated how long a Jewish baker could work with dough before it bubbles and leavens. In the famous exchange, one rabbi suggested eighteen minutes and the other, twenty-four minutes. Because they loved the law of God, the rabbis believed the best way to help people observe the law was to not exceed the regulation’s basic requirement. If you don’t want to cross a line, the reasoning goes, then stay away from it. As a result, if rabbis had a dispute between two guidelines, the stricter was always favored. To uphold their love for the law and make certain no lines were crossed, the rabbis agreed on the shorter time for unleavened bread.

This explains what I experienced while in Israel. Leading up to Passover, the removal of leaven creates a physical spring-cleaning and represents a deeper spiritual one. Jewish households, and restaurateurs like Ido, don’t focus on the yeast; they focus on the flour, which contains the capacity to become leaven.

In search of hidden hametz, the Hebrew word for leaven, people pull stoves from the walls, tear apart pantries, and scour the entire house to remove every last granule of flour. While more liberal Jews give their leavened food to Gentiles to store, the most conservative burn it.

One day while driving along the Galilee, I detected smoke rising from a nearby beach. I whipped the car around, daydreaming that maybe I’d see Jesus and the disciples enjoying breakfast. Instead, I discovered orthodox Jewish children standing around a fire pit burning their families’ hametz.

In light of my experiences in Israel and Andrew’s insights, I realized I’d either missed or misunderstood biblical references to leaven my entire life.

Wherever a passage refers to leaven or yeast, I interpreted the mention with modern ears. I’d imagine the baker reaching for an outside ingredient like a packet of Fleishmann’s rapid-rise to make dough bubble. Alas, commercial yeast wasn’t even invented until 1868.

This illuminates Jesus’s warning to beware the yeast of the Pharisees and Sadducees. This isn’t a cautionary advisement against an out- side contaminant. Rather, Jesus says, the same leaven that’s in them is already in you. Our real enemy isn’t what we see in others but what rises within us.

The judgmental nature, the critical eye, the insidious pride we notice in others, wait to rise up in us too.

Maybe you’ve felt the leaven bubbling in your heart.

One particular person in my life causes me to sour. I am annoyed by her religiosity, by her black-and-white rigidity, by her constant assessments that no one can live up to. When she asked that a girl who uses a wheelchair be removed from her daughter’s play- group because she slowed her child down, I wanted to throw a desk through the window. And by desk, I mean her.

Just like that, I realize that what’s rising in her heart is identical to what’s in mine.

If I allow my annoyance to rise, my leaven will push me away from her and her friends. The swelling in me can disrupt our entire community. No matter how justified we feel, there’s no space for judgment in our hearts. It rises up and makes us cynical and angry toward others until we’re tiptoeing around the very people we’re meant to engage and embrace.

Of course, Jesus tells us to beware of the hametz. The only antidote to the leaven of sin is Christ’s work in us. We must invite Christ to pull us away from our judgments, tear open our intentions, and scour our hearts. When we do this, we are able to live in a closer relationship with God and others.

What rises in your heart? What leaven do you see in your life that needs to be swept out with the help of the Holy Spirit? Come share with us on our blog. We want to hear from you! ~ Devotionals Daily