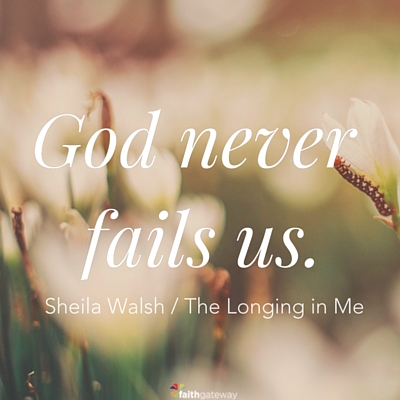 I often wonder how seriously we take that passage in the church. We tend to look to the most articulate and gifted among us, but God has a different set of scales that He uses to measure a life. He looks at the heart. If you just take the last two lines of the passage above — “God chose things despised by the world, things counted as nothing at all, and used them to bring to nothing what the world considers important” — it reads exactly like the story of the life of David, the shepherd boy whom God chose to be king over Israel.

Nothing about his early days would have made anyone believe he would be the chosen one. His own father missed it, but then again, so did Samuel, God’s prophet.

Before we meet David in Scripture, we’re given a picture of what happens when God’s people think they know what they need more than God does — a slippery slope.

Have you ever done that? Have you ever prayed a prayer and then been profoundly grateful in retrospect that God didn’t answer it the way you asked Him to?

I know I have.

David wasn’t the first king or the people’s choice. He wasn’t the one they wanted. You can read the whole story in 1 Samuel 8-10, but let me give you the “Cliffs Notes” version.

Before Israel had a king, judges ruled them — some good, some not so good. Samuel was the last of the judges. He was an old man when the elders of Israel came to his home in Ramah. They had come for an intervention of sorts. Here’s why. As Samuel aged, he had continued as judge in Ramah and the nearby towns, but he had appointed his two deadbeat sons as judges on the southern border of Israel. Whether he should have done that or not is questionable because we’re told throughout the book of Judges that God appointed a new judge. Add to that the fact that his sons took bribes and twisted justice and you get a bit of a picture of the mess that led up to this meeting with Samuel. The elders put their cards on the table:

Israel, God’s chosen people, wanted to be just like everyone else. Samuel was devastated that the people showed such faithlessness. Not only that, but he carried the heartache of seeing his own children reject everything he had ever taught them.

Some of you might be there right now. How the enemy loves to torture parents who have been faithful but whose children appear faithless. Our son, Christian, is about to go off to college as I write this, and he is a great boy, but I know there will be moments in life when I will need to resist the torments of the enemy and stand on the truth that our God is sovereign and my son is on His schedule, not mine.

Nothing will happen to your child today or tomorrow that doesn’t pass through the merciful hands of God, even though at times it will feel like a severe, tearstained mercy.

There are many lessons for us to learn from the faithlessness of God’s people. The children of Israel demanded a king, but they already had a King. They always had a divine King in God. Now they wanted what made sense to them, what they could see with their eyes.

I wonder if I’m much different at times. God’s Word is filled with more than three thousand promises. But when I walk through a hard season, I want tangible signs that God is going to come through for me.

Do you ever find yourself there?

We long for love and acceptance. We know that God loves us, but we can’t see God with our eyes or feel His arms around us or hear His audible voice telling us that we are loved. So we look for that kind of love and acceptance in someone else.

So, back to the children of Israel. God said to Samuel, “If that’s what the people want, let them have their king.”

As they looked around, the Israelites saw that every other nation had a king who was a strong warrior leader, who would take them into battle. They wanted a victorious warrior-king too. Not only that, they wanted a king who looked like a king. That’s exactly what they got in Saul. He was tall, dark, and handsome, but on that day when the people cried out, “Long live the king!” they had no idea what they had just signed up for.

Saul started well, but before long he showed how flawed his character really was. Life is like that. We can all put on a good face for a time, but add enough pressure and stress, and our wounds and flaws will surface. Israel’s king showed himself to be a mean, selfish, petty, and violent man. But in God’s eyes, he was a law unto himself. Three times Samuel caught him in serious acts of disobedience to God.

He offered a sacrifice that he had no right to offer. He had been instructed to wait for Samuel. (See 1 Sam. 13.)

He made the men in his care take a rash vow that almost cost him the life of his own son Jonathan. (See 1 Sam. 14.)

He directly disobeyed a specific instruction from God to kill King Agag. This final act of defiance cost him everything and led to these tragic words: “And the Lord regretted that he had made Saul king over Israel” (1 Sam. 15:35 esv).

Saul’s disobedience broke Samuel’s heart. He grieved so hard and so long that God finally intervened and said, “Enough!” It must have seemed to Samuel that everything had gone wrong. But he would live to see that no matter how often we fail God, God never fails us.

We are introduced to David in person in 1 Samuel 16 but meet his character before that. In the last conversation Samuel ever had with Saul, he said this:

But now your kingdom must end, for the Lord has sought out a man after His own heart. — 1 Samuel 13:14

What an incredible commendation from God, a letter of reference from the Most High. I can’t think of anything I want more in life than that — to be known as a woman after God’s own heart!

God instructed Samuel to go to Bethlehem, where He had already chosen a king from Jesse’s sons. Do you remember who Jesse was? He was Ruth and Boaz’s grandson. Ruth’s story is the antithesis of the children of Israel’s. She wasn’t born an Israelite. She married into the nation. Then, even after her husband died, she refused to abandon her mother-in-law. Instead, she traveled with her to Bethlehem, saying,

Your people will be my people and your God will be my God. — Ruth 1:16

That passionate faithfulness had trickled down through the years and would also be found in a teenage boy out watching his father’s sheep.

This is what God told Samuel to do:

Take a heifer with you… and say that you have come to make a sacrifice to the Lord. Invite Jesse to the sacrifice, and I will show you which of his sons to anoint for me.” So Samuel did as the Lord instructed.

When they arrived, Samuel took one look at Eliab and thought, “Surely this is the Lord’s anointed!” But the Lord said to Samuel, “Don’t judge by his appearance or height, for I have rejected him. The Lord doesn’t see things the way you see them. People judge by outward appearance, but the Lord looks at the heart.” — 1 Samuel 16:2–7

Though the minute Samuel saw Jesse’s oldest son, he knew he’d found his man, God said no. Eliab was the one everyone would have chosen — the eldest, strong, handsome — but God told Samuel that He’d already rejected him. He didn’t pass heart inspection.

Next, Jesse offered up the other six sons he’d brought with him, and each time God said no.

Finally Samuel asked if this was it, or if there were any others.

“There is still the youngest,” Jesse replied. “But he’s out in the fields watching the sheep and goats.” — 1 Samuel 16:11

Isn’t it interesting that Jesse didn’t think it was worth bringing David out? After all, who was he? He was just a kid watching the flocks. Yet while he shepherded in silence, God saw him.

Now, let me ask you: How many ministry opportunities do you think David had out in the field? None that we would have noticed, but God did not miss one. He heard the psalms that David sang over the flock. He saw his courage as David risked his own life to snatch a lamb from the paw of a bear or a young goat from a lion. He discerned David’s heart and knew that this teenage boy who would sing in the darkness and fight in the light would be the one He would anoint as king of Israel.

I hope that encourages you as it does me. If you tend to look at other women and compare yourself to them, this story should be a wake-up call. Even within the church and parachurch organizations, we often discern wrongly. We’re drawn by charisma more than by character. But charisma cracks under pressure while character doesn’t.

David never asked to be chosen. He’d been hidden away, serving God with a full heart, when God’s choice ran like oil over his head. I, on the other hand, had a desperate need to be seen and chosen.

When need is in the driver’s seat, you can find yourself on the side of the road in the rain with the smell of smoke all around you.

Have your longings ever landed you right in it?

Do you ever find yourself thinking that nothing will ever change? I want to pause here and acknowledge how painful that is, but I don’t want to leave you there. As a daughter of the Most High God, everything can change! It just takes some time and some commitment to begin thinking a new way.

Find a three-by-five card and write on it:

The God who created me has chosen me as His beautifully loved daughter. Because of that I can take other rejections in stride.

Now, place it somewhere that you’ll see it every day, and read it over and over until you begin to believe it more than the lie that you are not worthy of being chosen. The God of the universe has already chosen you and says to you, “You are Mine!”

Watch the Video for The Longing in Me

Excerpted with permission from The Longing in Me by Sheila Walsh, copyright Sheila Walsh.

Come join the conversation on our blog! We’d love to hear your thoughts about David, the King chosen by God because he was a man after the Lord’s own heart. ~ Devotionals Daily