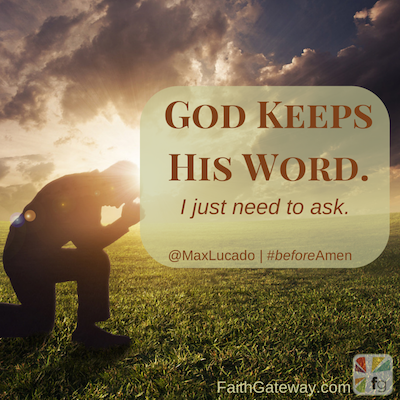 Life is a gift, albeit unassembled. It comes in pieces, and sometimes it falls to pieces. Part A doesn’t always fit with part B. The struggle is too great for the strength. Inevitably, something seems to be missing. The pieces of life don’t fit. When they don’t, take your problem to Jesus.

Mary, the mother of Jesus, did.

On the third day there was a wedding in Cana of Galilee, and the mother of Jesus was there. Now both Jesus and His disciples were invited to the wedding. – John 2:1–2

A common wedding. The bride wasn’t the daughter of an emperor. The groom wasn’t a prince. Were it not for one detail, the event would’ve been lost in time. The guest list. It read something like this:

The family invited Jesus to a wedding. Since He always goes where He is invited, Jesus and His disciples traveled to Cana for their first excursion. While they were there, the wedding party “ran out of wine” (John 2:3).

Someone underestimated the size of the crowd or the appetite of the guests or the depth of the wine vats or the number of friends Jesus would bring. As a result the bride and groom ran out of wine. In your case the department ran out of cash, the team ran out of solutions, or you’ve run out of energy. Life leaks.

Enter, stage right, Mary, the mother of Jesus. For my nickel she appears too seldom in Scripture. After all, who knew Jesus better than she did? She carried Him for nine months. Breast-fed Him for more. She heard His first words and witnessed His first steps. She was the ultimate authority on Jesus. So on the rare occasion she speaks, we perk up.

Mary wasn’t bossy. She didn’t say, “Jesus, they are out of wine, so here is what I need you to do. Go down to the grove at the corner, accelerate the growth of some Bordeaux grapes, and turn them into wine.” She didn’t try to fix the problem herself.

She wasn’t critical. “If only they had planned better, Jesus. People just don’t think ahead. What is society coming to? The world is going over the cliff! Help, Jesus, help!” She didn’t blame the host.

She didn’t blame Jesus. “What kind of Messiah are You? If You truly were in control, this never would have happened!”

Nor did she blame herself. “It’s all my fault, Jesus. Punish me. I failed as a friend. Now the wedding is ruined. The marriage will collapse. I am to blame.”

None of this. Mary didn’t whine about the wine. She just stated the problem.

Then “Jesus said to her, ‘Woman, what does your concern have to do with Me? My hour has not yet come.’

His mother said to the servants,

Originally, Jesus had no intention of saving the wedding banquet. This wasn’t the manner or place He had planned to reveal His power. But then Mary entered the story – Mary, someone He loved – with a genuine need.

In my imagination I see Mary turn and walk away. Her face is serene. Her eyes reflect calm. She is untroubled. She has done everything she was supposed to do. She has identified the problem, brought it to Jesus, and left it with Him. She trusted Him completely. She told the servants, “Whatever He says is okay with me.”

In my imagination I see Jesus smile. I hear Him chuckle. He looks up into the heavens for a moment and then looks at a cluster of six waterpots over in the corner.

Jesus said to them [the servants], “Fill the waterpots with water.” And they filled them up to the brim. And He said to them, “Draw some out now, and take it to the master of the feast.” – John 2:7-8

The master of the feast tasted the wine and licked his lips and said, “This is good stuff!” Then he lifted his glass in a toast to the bridegroom and complimented him for saving the best wine until last.

While the master of the feast noted the quality of the wine, John wanted us to observe the quantity. Six stone jars capable of holding thirty gallons apiece. The servants filled them to the brim (John 2:7).

Quick calculation reveals the amount: 908 bottles of wine! The couple could have begun a wine business in Napa Valley.

There is another version of this story. In it Mary never involved Jesus. She took the master of the feast to task for poor planning. He took exception to her accusations. Mary stormed out of the party. The groom overheard the argument and lost his temper. The bride told her groom to forget marriage.

If he couldn’t manage his anger, he sure couldn’t manage a home. By the end of the day, the guests left sad, the marriage was ended before it began, and Jesus shook his head and said, “I could’ve helped if only I’d been asked.”

That version of the story isn’t in the Bible, but the principle surely exists in life. We can only wonder: How many disasters would be averted if we’d go first, in faith, to Jesus?

The punch line is clear: take your problem to Jesus.

“Max, if I take my problems to Jesus every time I have one, I am going to be talking to Jesus all day long.” (Now you are getting the point.)

Don’t worry about anything; instead, pray about everything; tell God your needs and don’t forget to thank Him for his answers. If you do this, you will experience God’s peace, which is far more wonderful than the human mind can understand. His peace will keep your thoughts and your hearts quiet and at rest as you trust in Christ Jesus. – Philippians 4:6-7 (The Living Bible)

An unprayed-for problem is an embedded thorn. It festers and infects – first the finger, then the hand, then the entire arm. Best to go straight to the person who has the tweezers.

Can I share a time I did this? Two of our three daughters were born in Brazil. Soon after we brought Jenna home from the hospital, we received a surprise.

A hefty hospital bill. Our stateside insurance company wouldn’t pay the medical charges. To this day I’ve never understood the issue. No matter how much I pleaded, explained, or cajoled, the insurance company said, “We won’t pay.” The hospital meanwhile said, “You must pay.”

During that season of my life, I was learning much about trust. Several verses had become theme promises to me, among them:

Be anxious for nothing, but in everything by prayer and supplication, with thanksgiving, let your requests be made known to God. – Philippians 4:6

I was a novice to anxiety-free living, but I resolved to try. I treated each anxious thought – and there were many – with prayer.

Lord, with your help I will not be anxious. But I am in a foreign country with a new baby and an empty bank account. Hint, hint.

God took the hint. A speaking invitation came my way. A church flew me to Florida to speak at a retreat. It was the only such opportunity that arose during our five years in Rio de Janeiro. As I was leaving the church to return to the airport, a gentleman handed me an envelope. He wanted to bless the work. Such gifts were common. People often handed us $50 or $75. I thanked him and tucked the envelope into my pocket.

As the plane took off, I opened it. Inside was a check for $2,500! Exactly the amount we needed to replenish what we had lost. That event was a mile-marker moment for me.

God keeps His word. I just need to ask.

What might this look like for you? Imagine this scene. It is breakfast time, and the family is in chaos.

The daughters are complaining about their brother who took too much time in the bathroom. As a result their hair isn’t brushed and makeup isn’t applied. Mom is doing her best to manage the conflict, but she woke up with a headache and a long list of things to do. The clock is ticking like a time bomb, ever closer to that moment when, boom! It’s time to go. Dad stops at the kitchen entryway and surveys the pandemonium. He weighs his options:

Or he could turn to the Pocket Prayer.

Father, You are good. I need help. Reduce the frenzy in my house, please.

Will the prayer change everything? It may. Or it may take another prayer, or two, or ten. But at least the problem will be in the hands of the One who can solve it.

Cast all your anxiety on Him because He cares for you. – 1 Peter 5:7

Most of us can take our problems to Christ, but leave them there? For good? With faith? Again, let Mary be our model. She took her problem to Jesus and left it there. “Whatever He says to you, do it.” Resist the urge to reclaim the problem once you’ve given it up.

Pieces don’t fit. Wine runs out…. These are facts of life. But Jesus responds with this invitation: “Bring your problems to Me.” State them simply. Present them faithfully, and trust him reverently. Odds are you will be raising a glass and proposing a toast before you know it.

Excerpted from Before Amen: The Power of a Simple Prayer by Max Lucado, copyright Thomas Nelson, 2014.

Take your problems to Jesus today. Talk to Him. Trust Him with your anxieties because He cares for you! Come join the conversation on our blog! We’d love to hear from you about saying, “Lord, I need help”! ~ Devotionals Daily 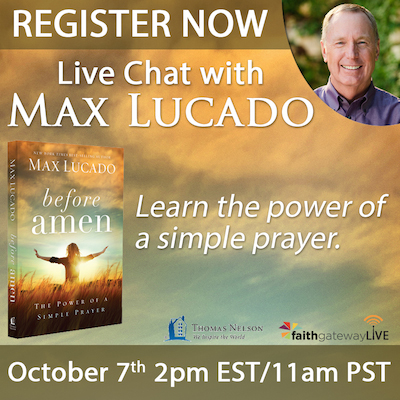 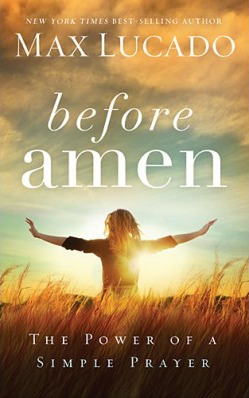