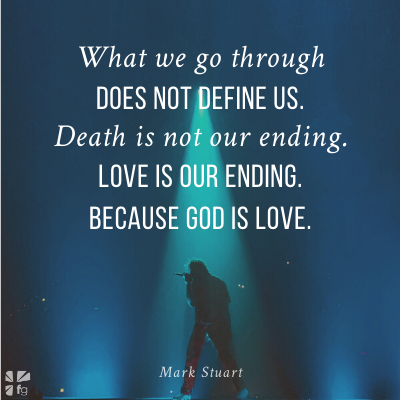 Editor’s Note: Mark Stuart was the front man of popular Christian rock band Audio Adrenaline at a time when the Christian music scene exploded. Advancing from garage band to global success, the group sold out stadiums all over the world, won Grammy Awards, and even celebrated an album going certified Gold. But after almost twenty years, Mark’s voice began to give out. When doctors diagnosed him with a debilitating disease, the career with the band he’d founded and dedicated his life to building was gone. Then to his shock, his wife ended their marriage, and Mark believed he’d lost everything. Mark shares the story of his restoration in his new book Losing My Voice to Find It: How a Rockstar Discovered His Greatest Purpose. Enjoy today’s excerpt.

Kerri wanted to meet at the house. It was December. There were no Christmas decorations or presents under the tree. She had a list of furniture she wanted and walked through the house, double-checking if there was anything else.

“Do you want this lamp?”

I looked around at the furniture. I didn’t want any of it. It was hard to breathe. She asked if I was sure. I was sure. It all felt pointless.

She asked about the band. Our last album was complete. We’d announced publicly Audio Adrenaline was quitting. Rumors flew throughout the industry. They needed the distraction. The industry was hit hard by a combination of the digital-music revolution and the rise of worship music. Christian rock was all but over.

I helped load furniture. I remembered the discussion behind purchasing each piece. We’d picked them out based on colors and style and how well it would wear with time and use. Every piece was a part of a puzzle. The interior of the house looked like it belonged in a magazine. We’d produced a great product. Now half the puzzle pieces were leaving. The puzzle could never be completed again.

Some of the furniture was new, some of it was fragile antiques. We were careful not to ding anything while packing the U-Haul she had rented. I watched her red taillights fade away and blur into Christmas lights hung on homes filled with families and joy and the magic of the season. Our house was dark. I turned and walked in.

I felt like a ghost in my own house, hollowed out and haunted. Everything I thought I was and liked about myself was gone. I was humiliated. I felt like the fake I always feared I was. My band, my ministry — it was all pointless. My career was over. People I loved, who counted on me, were now looking for jobs. I didn’t know how to support myself. Even if my voice could recover, the industry would move on and the twenty years of Audio Adrenaline would become a small asterisk in music history. I would soon be divorced. A failure with a scarred heart, where I doubted any future love could grow. The fires of God and love and rock and roll were all but extinguished within me. There was nothing left but ash and flickering embers, too weak to provide warmth. I cried myself into the coldness of night. A remnant of a man, puddled on an empty hardwood floor, with no voice to call for help. I was abandoned by any god who could hear me anyway.

Morning arrived without color. It was the first day of the rest of my terrible life. A thick, gray layer of ice had settled during the night, concealing any remaining beauty in the world. After a night of crying, the house closed in on me. I had to get out. I opened the back door. It creaked. The air felt as numb as my heart. Ice crunched underfoot as I walked across the frozen gravel driveway. The cold that had reduced towering summer oaks to skeletons of winter bit at my bones. I buttoned my jacket. It was no use. The cold came from within. My wife had taken our new car, so I scraped ice from the window of my beloved black Ford Bronco. The door was iced shut. I pried it open to sounds of screeching frozen metal. Inside was colder.

My Bronco desperately needed a new battery and barely started on a warm day. It was a decade old and showing signs of age. It was all I had left. Everything I touched felt frozen. The seat. The steering wheel. The ignition. I paused before inserting the key. I didn’t know how to move on, or if I wanted to. Everything that gave purpose to my life had come to an end. I didn’t know who I was without a band or a wife. I didn’t know who I could be. Options are scarce for singers with no voice. Singing in a band was all I’d done since high school. It was my voice that had opened every door in my life. Without my voice, I was nobody.

I took a deep breath and leaned back into the cold seat. I couldn’t exhale. I was frozen. There was no sound, no color, no hope. I tried to scream. Nothing came out. The pain, built in my silence and without a voice, could only escape through tears. I had never been so alone.

I stuck the key in the ignition and mumbled a cry of desperation. The words were barely audible.

At that moment, I needed to know if God was real. Was he an active participant in this life or did he just wind the clock and let it go? If he wasn’t what was promised on that rooftop in Haiti half a life ago, I was ready for it all to be over. I was tired of placing hope in fantasies.

I turned the key in the ignition. Several things happened at once.

I felt the warmth of a lion’s breath come over me. The Bronco was no longer cold.

The engine started with a growl.

A song started playing loudly through the radio. I recognized it immediately.

This is the good life.
I’ve lost everything
I could ever want
and ever dream of.

But it couldn’t be. That song hadn’t been on the radio for five years. Someone must have put the Underdog CD in my CD player and cued it up to encourage me. I looked through the sections of scraped ice on the windows to see if Will or one of the guys was in the driveway, waiting with a smile. No one was there. Who did this? I looked at the CD player. There was no CD.

My eyes were opened, and my heart was pierced. God did more than start my truck. He did more for me than I could ask or imagine. Just like he promised. In one instant, he reminded me that he was my Dad, he was in control, and I was somehow worthy of this romantic, divine, miraculous moment with him.

This is the good life.
I found everything
I could ever need.
Here in your arms.

The song was called “Good Life.” We’d written it long ago for my friend Luis, after his wife left him. The first verse starts with the line, “I’ve watched my dreams all fade away / and blister in the sun. / Everything I’ve ever had is unraveled and undone.” The song went number one on Christian Hit Radio, but hadn’t been on a playlist for years. I’d never felt more alive. I felt my heart pounding in my chest. The second verse began.

Loneliness has left me searching
for someone to love.
Poverty has changed my view
of what true riches are.
Sorrow’s opened up my eyes
to see what real joy is.
Pain has been the catalyst
to my heart’s happiness.

My heart raced with the rhythm of guitars, and my tears fell with each crash of cymbals, and my spirit swelled with each chorus as words I’d written for someone else returned in the echo of God’s heart and washed over me. I gripped the wheel and lowered my head against my hands. I whispered the next chorus. My broken voice in the Bronco sang harmony with my restored voice over the radio, and for a moment, my voice was complete.

Tears fell from the vault before God separated the waters. He knew me then. From the foundation of the world, he knew about this moment. Since before there was sound, God had known this song. He’d prompted my heart to write it and somehow ordained it to be played on the radio at the exact moment I turned that key of the Bronco. It was God’s answer to my question if he was there. Just starting the car would have been enough. The rest was a lavish display of his love, and I knew in that moment, God had me. No matter what happened next, I would be okay.

As only God can do, in a split moment, I was healed from a lifetime of hurt. This was my burning bush, where God spoke directly to me. He assured me that my career wasn’t a joke and that the song I thought I’d written for a friend so many years ago was really God’s song. He held it close, knowing I would someday need it for myself. God told me that the way I felt when the song washed over me was the same way fans all these years felt when the music washed over them. I was not abandoned. In fact, this was a moment of complete awareness. God was there, and I could finally see him clearly. I could see him in the goodness and warmth. I could see him in past and present. I could see him in the band and in my broken marriage and in my empty house. I could see him in my pain. The pain didn’t go away. It became God’s pain. Only now, I felt it through the filter and purpose of his love. He told me I was not a fake. He told me who I really was:

You are Mark Stuart. Not the husband. Not the lead singer. Not the stadium performer. Not the Grammy winner. Not the industry leader. Not the ministry founder. Just Mark Stuart. Period. You are my son. I love you with all the goodness in and beyond this world. I love you when you seek me. I love you in the dark places of your doubt. Even in the silence, when your ears cannot hear, I am busy, loving you.

Life is a continuous series of deaths made up of losses we endure on the journey. We lose a loved one. We lose our marriage. We lose our jobs. We lose an innocence moving from one stage of life to the next. Ultimately, we lose our earthly lives. I had stepped into the Bronco in death. In there was my baptism, where the Holy Spirit washed over me in song. The warmth was the breath of God resurrecting me deeper into his presence. I was born again — again.

What we are going through is temporary. What we go through does not define us. Death is not our ending. Love is our ending. Because God is love.

Excerpted with permission from Losing My Voice to Find It: How a Rockstar Discovered His Greatest Purpose by Mark Stuart, copyright Mark Stuart, 2019.

He who finds his life will lose it, and he who loses his life for My sake will find it.
— Matthew 10:39 NKJV

What losses & what pain have marked your journey? How does it comfort you to know that those are the very places where God wants to write His story of redemption? We’d love to hear your thoughts in the comments! 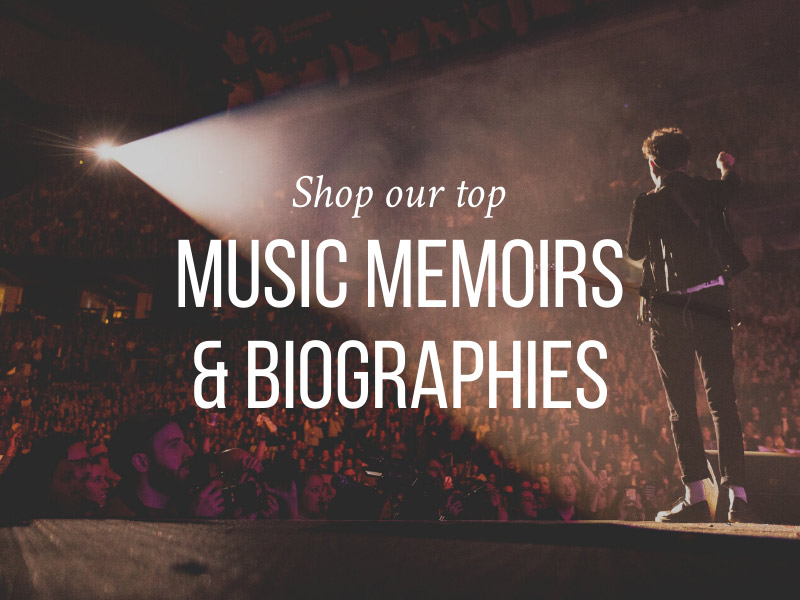