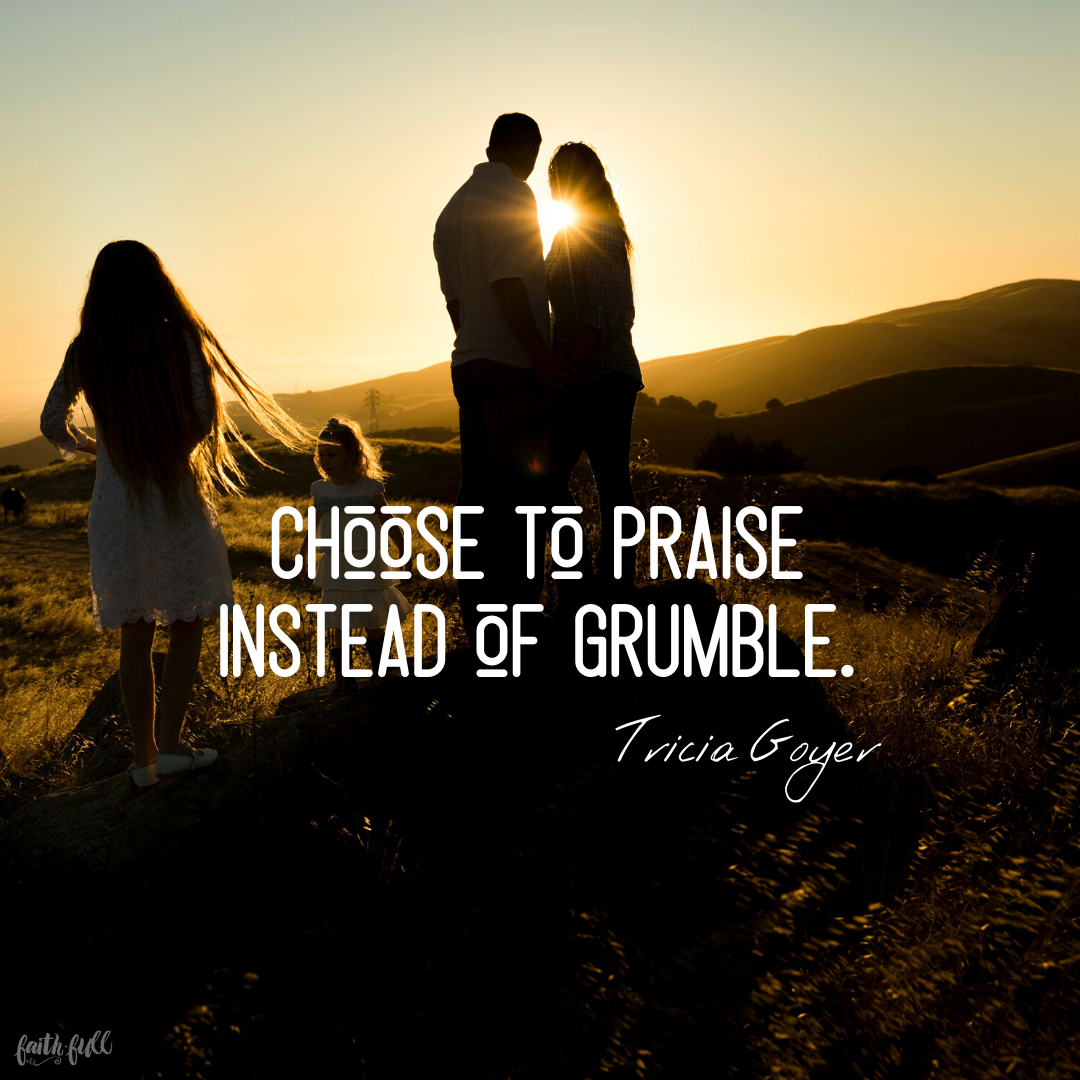 One weekend my whole family traveled with me on a speaking trip to a homeschool conference. John drove and helped at the book table. I spoke. The kids attended workshops for their age groups, covered every inch of the exhibit hall, and made new friends.

After packing up all our things, we arrived back at home after midnight. We let the kids sleep in the following day, a Sunday, but that meant we missed church. Once we did get up and moving, we had a full house — grown kids and grandkids in addition to our regular household of eleven. It was great but exhausting. And as I looked ahead to the week to come, I knew things would be getting harder, not easier.

Weary from the previous week, I woke up early Monday morning because my grandma was having back surgery. It turned out her back hadn’t healed as the doctor had hoped. Even though we were diligent about putting on her back brace whenever she sat up or stood, the break had gotten worse. Because of her age and osteoporosis, the doctor didn’t believe her back would heal on its own. Thus the surgery.

It was hard seeing her wheeled away, but a few hours later we received a good report. The surgery had gone well. Now she was back in the hospital room recovering, which meant I was trying to spend as much time up there as I could. Yet that didn’t mean things were slowing down at home.

Monday was also Anna’s eighteenth birthday, and we were planning to have a houseful of people that night, but I was so weary already that a celebration simply seemed like work, not fun. Add on a teen’s rebellion from the previous evening, an attitude I still had to deal with. The day was a heavy, busy one. Yet maybe that’s only because I was looking at my day with the wrong perspective.

The truth was, I had so much to be thankful about. The previous week a family friend had sold us a car for much less than its value, and now my daughter would have a car for college. My mother had arrived recently to help with my grandmother. And let’s not forget that my grandmother’s surgery went well, even though she was eighty-eight years old.

It was so easy to get caught up in everything that needed to be fixed and done, but truthfully the root of my angst was my grumbling heart. I loved my big family, but inside I grumbled because I didn’t have time for myself.

I loved traveling to speak, but I grumbled because it was so much work, especially taking my family along.

I was very grateful to be in my forties and still have my grandmother around, but my heart already carried heaviness as I realized what the weeks ahead were going to look like as I cared for her after surgery.

I was also so quick to figure out the right consequences for my wayward teen that I didn’t pause to realize that her attitude and actions were a red flag, alerting me that there was a connection that needed to be made. What looked like outright rebellion was really a green light to connect with her, to seek her heart.

As I took time to confess my grumbling heart and sought to lift it instead to God, my attitude began to change. Today was a day of celebration. My daughter was eighteen, and God had given us the opportunity to love her and parent her for three years and to do our best to guide her into adulthood. She was a beautiful young lady who loved God and was making good decisions — we needed to celebrate that!

Today was also a day of celebration because I still had my grand- mother and family filled my life. As my husband, John, always says, “There’s a whole lot of living going on here.”

As I thought about all that was happening, I realized that in the midst of it all was God. This life we’d been living had all started with me saying, God, I’ll do anything for you. Anything. While it seemed like a noble thought then, the reality was that following Jesus was a whole lot of work day by day. It reminded me of Jesus’ conversation with Peter on the night before his death in John 13:36-38:

Simon Peter asked Him, “Lord, where are You going?”
Jesus replied, “Where I am going, you cannot follow now, but you will follow later.”

Peter asked, “Lord, why can’t I follow You now? I will lay down my life for You.”

Then Jesus answered, “Will you really lay down your life for Me? Very truly I tell you, before the rooster crows, you will disown Me three times!”

Oh, Peter, you had no clue what you were saying, did you? Like me, you had all the right intentions, but you had no idea what your declaration would mean or where it would take you. You had no idea of the tears that would be shed, the conflict you’d face, and the opposition that would come.

It is much easier to die than to lay down your life day in and day out with the sense of the high calling of God. We are not made for the bright-shining moments of life, but we have to walk in the light of them in our everyday ways. . . . If I am a friend of Jesus, I must deliberately and carefully lay down my life for him. It is a difficult thing to do, and thank God that it is.1

If laying down my life were easy, then I wouldn’t need Jesus. I wouldn’t need to get up early, seek His face, and ask Him to transform my grumbling heart even before the day begins.

Peter’s life was transformed as he faced hardship, and Peter’s heart was transformed too. Later, the man who was ready to fight and die for Jesus realized it wasn’t one grand display that would prove his love but the daily pouring out.

In a letter to fellow believers, Peter wrote,

Above all, love each other deeply, because love covers over a multitude of sins. Offer hospitality to one another without grumbling. Each of you should use whatever gift you have received to serve others, as faithful stewards of God’s grace in its various forms. — 1 Peter 4:8-10

That day I awoke with a grumbling heart, but as I sat before God everything changed — not externally but internally. And I knew that my day — as busy as it was — would be transformed too. Getting lost in the middle of ingratitude happened so easily, but refocusing — that was the harder part. How much easier life would be if we could just be brave and do one grand gesture for God and then everything would be smooth from there. Instead, life means laying down oneself over and over again — for your grandmother, for your new-to-adulthood child, and for your difficult teen. That’s what following Jesus truly is all about. Loving through the hardships and when we feel weary. Choosing to praise instead of grumble, and pausing to find God in the midst of busyness. Maybe soon I’d be able to take a moment to rest… but now it was time to step out and love, serve, and praise.

What do you face today? What is on your to-do list? If you don’t have a list, make one. And then after each item add: without grumbling.

1. Oswald Chambers, “Will You Lay Down Your Life?” My Utmost for His Highest, accessed February 28, 2019, https://utmost.org /will-you-lay-down-your-life/.

Excerpted with permission from The Grumble-Free Year by Tricia Goyer, copyright Tricia Goyer.

Come share your comments on our blog! We want to hear from you! ~ Laurie McClure, Faith.Full