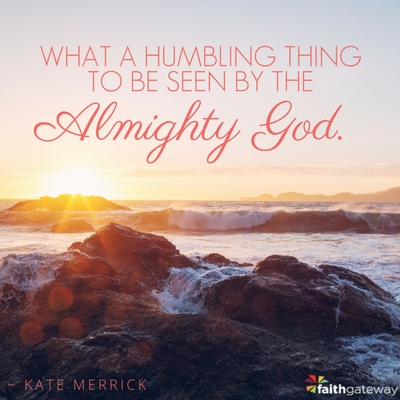 Editor’s Note: Welcome to Sit & Listen Saturday featuring Devotionals Daily audio devotions. Enjoy reading as well as listening to your devotional today from And Still She Laughs by Kate Merrick.

Our Love Note to God

Faith is a peculiar thing. “Have faith,” people say when they’re hoping it rains. “Have faith,” they say when you’re up for a promotion. Or “Have faith,” they say when your daughter is on her third cancer diagnosis, fighting for existence and at death’s door. We throw the word around, featherlight, gaily at an afternoon tea. Or we grip hands covered in sweat and dust, looking deep into eyes whose light is waning. Sometimes faith makes me think of ruby slippers clicked together or fingers crossed. Or of scrunched-up eyes and the groaning sound you make when you’re reaching for something that’s just an inch too far away. That word holds the weight of hopes and dreams; it can be airy or religious, meaningless or deep. Faith and confusion seem to bleed together, running down until you aren’t sure what it was supposed to look like in the first place.

Truth is, it’s not all that confusing. Once we shed our American Christian culture, our personal experiences with erroneous faith healers, or any false ideologies we might have held or assimilated, faith is more clear, more lovely, more life-giving than we can imagine. The Bible defines faith as the “confidence that what we hope for will actually happen; it gives us assurance about things we cannot see” (Hebrews 11:1). This, this simple definition, holds an entire world in the balance for me. I can close my eyes and feel Daisy’s warm delicate hand in mine. I feel her velvety hair right underneath my chin, the way I held her on my lap thousands of times. I hold my breath expectantly, certain of her existence, of her aliveness in a place I cannot see. I have my foot lifted, arms out — my stance ready to enter into this wonderful place and catch her at any moment.

Mary, the brave lioness, the mother of Messiah, demonstrated so much of this faith during her pregnancy and birth, though her agreement to participate in the story surely brought bewilderment. It began with a bang: the heavenly messenger, the bright star, the choir of angels, the exotic royal gift bearers, all surrounding Mary like confetti shot high into the air, twinkling down all around her and casting a gilded glow.

But then… silence. Like a book slamming shut, perhaps a few dust motes lazily spiraling in no particular direction. Following this supernatural commencement came years of obscurity and quiet. After all the confetti had fallen and become dusty on the ground, wedged into cracks in the dirt road, Mary was doubtless wondering if she had heard correctly. Ahead were years of the mortal, years of the mundane, years of latent power mysteriously concealed in humanity.

Gone were the cosmic entourage, the perilous adventure soundtrack. All that was left was perhaps the methodical ringing of the hammer. The thighs-in-corduroy sound of the saw, the dusty carpenter clothing to wash, the low hum of a small town with its buying and selling and gossip and donkeys and rabbis. There probably wasn’t even much bickering in the family with Messiah as the eldest keeping the others in line. Every day the sun rose, bread was made, hummus was mixed, oil was pressed, garments were mended, pigeons were sacrificed, the Torah was read, and the sun set. Mundane. Life.

Until a wedding. I have been thinking about the wedding at Cana lately. I imagine the place dotted with gorgeous stone-walled estates nestled among vineyards. Olive trees lined up in neat rows with silvery green leaves quivering in the breeze and small, uniform herds of plump, healthy animals grazing lush pastures. And the famous wedding.

I’m envisioning twinkling lights everywhere, torches and candles and hanging lanterns casting the soft, radiant light that causes guests to appear svelte, sultry, and better-looking than usual. Pillows spilling out invitingly around low tables for dipping dates in herbed goat cheese and honey languidly dripping from the comb, piles of earth-hued olives. Bronze chalices of wine next to steaming stacks of flatbreads and wide saucers of hummus, pooled in the center with olive oil, green and fresh.

And dancing. Lots of it. A completely raging party where there is nary a square inch of dance floor to spare, sweat flying, hair and skirts twirling and pulsing in time with the music. Elegantly embroidered fabrics draped luxuriously around the merrymaking, creating swooping ceilings and tents, fluid with the night air. Gorgeous. At least in my mind. I actually have no idea what it would have looked like! But what we do know is that there was wine. Jugs of it. And that at this particular wedding, it had run out (What a bunch of lushes!), causing a problem for the wedding host.

Now Mary, ever the proud mother, knew her Jesus could do something about this relatively unimportant yet public and present problem. I just love that. Mamas, don’t we all feel like that about our sons? Especially firstborns.

We make them do their tricks, sing sweet songs, and play instruments for guests. We brag on their abilities; we showcase all their accomplishments. We are starry-eyed about them. And of course Jesus, being God and all, could fix anything!

What I find most interesting here is that this wedding took place before Jesus had started His public ministry. He had gathered His disciples and been baptized by His cousin John, but there were no miracles recorded yet. He appeared ordinary, as described in Isaiah 53:2:

There was nothing beautiful or majestic about His appearance, nothing to attract us to Him.

So, after all this time, after such a mystifying and incomprehensible yet celebratory beginning, He lived an incredibly common life. Had Mary spent thirty years with Jesus just waiting? I’m sure He was a great kid and a hardworking tradesman, but a miracle maker? Considering the political climate and Jesus’ lack of antagonism toward Roman rule, was she second-guessing His identity? Maybe she ate too much spicy lamb that night when Gabriel came, or maybe he was the product of a young imagination? I don’t think so.

No, all those years she’d held on to the words of the Lord. She had pondered them. She had stored them up in her heart, and despite having never seen Jesus perform a miracle, that truth gave her the confidence to ask Him to do something about the wine problem. The story is really so cute. She learned the wine supply ran dry, so she found Him and said (in my imagination) in a womanly, read-my-mind sort of way, “They have no more wine.”

And He replied with, “Mom! Stop pressuring me!” Okay, no, that was my son. Her perfect Son said, “Dear woman, that’s not our problem. My time has not yet come.” Jesus was telling her He was not super into it; the miracle show had not officially commenced.

Mary, ever human and a female human at that, ignored Him and told the servants to do whatever He told them to do. Mary, you’re too much! I’m secretly relieved at this. I mean, all that sacrificing and faith and suffering and blessed-among-women stuff. She was real, after all.

We know the rest of the story. Jesus had the servants fill six stone jars with water and then had them bring some to the master of ceremonies, who after sampling it for himself was astounded at the quality of what had been turned into wine. Kind of a puzzling miracle, if you ask me, but Jesus was an efficient guy. The result of this party-saving sensation? His glory was revealed, and His disciples believed in Him. Rad.

You know what my personal opinion of all this is? Two things:

She had no doubts about who her Son was, even after all that time. She believed He was who He said He was and that He would do what He said He would do. Thirty years of carpentry and Passover meals and Roman occupation couldn’t change that. She had been meditating on the things that revealed God was keeping His word to her. She had been watching His movements, from the virgin birth to Jesus astounding the religious teachers and students at the temple in Jerusalem as a twelve-year-old to the beginning of His ministry. All along the way she acknowledged the hand of God.

Mary, you knocked it out of the park again with your disregard for circumstances, your trust in God’s plan, knowing the one can’t affect the other. Again, she partnered with God, stepping out into uncharted territory with confidence.

Britt and I learned to do this during the years we fought for Daisy’s life, recognizing the ways we knew God was there all along. We had to if we wanted to survive. We kept a list — not a list that showed all the victories or prayers answered exactly how we ordered them, so we could make tally marks on the scoreboard for the home team — our list showed something even better. Because when the answer to the prayer was no, when the road was rocky, when suffering didn’t let up but instead increased, we didn’t count those things against God’s record. That would have been missing out on what was good, true, and beautiful: that He saw the way we held her hands while she endured painful treatment. That He was with us, right there in the sterility of hospital rooms, in the cover of darkness as we clung to each other and convulsed with lamentation, in the endless loneliness that sickness brings. That He comforted us, from the ways He spoke to us through Scripture and friends to the small miracles that gave us peace. Had we not recognized those things we would have drowned in despair.

What a humbling thing to be seen by the almighty God. What a gift to say that we have seen Him. Just a teeny bit of faith can hold up even the weariest arms.

We continue on in the same way now that she is gone. We have learned to reflect on the goodness of our lives, on the loveliness that surrounds. We have learned to accept in faith both God’s blessings and the hardships, openhandedly receiving from Him what He chooses to allow. And we have learned to wait. We wait for Jesus when it appears His power is latent, wait with Him while the waves of sadness wash past. We wait in faith, anticipating future splendor.

Faith is the love note we give to God. It’s the act, or rather the choice, that pleases Him.

Excerpted with permission from And Still She Laughs by Kate Merrick, copyright Kate Merrick.

The confidence that what we hope for will actually happen; it gives us assurance about things we cannot see… Faith is a beautiful thing. Even in the face of heartbreak. It turns our faces toward loveliness and God’s goodness without denying the suffering He does allow. Come share your thoughts on our love note to God (faith) on our blog! We want to hear from you! ~ Devotionals Daily 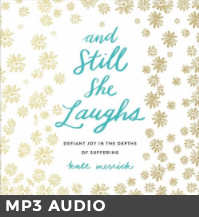