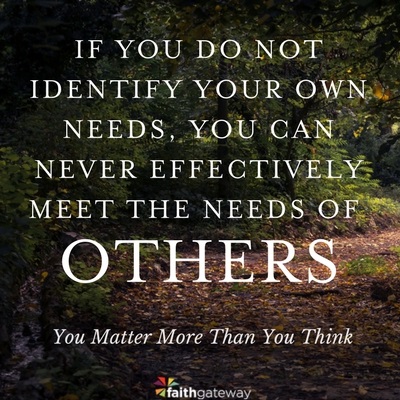 A “No” uttered from deepest conviction is better and greater than a “Yes” merely uttered to please. — Mahatma Gandhi

I remember a day in my clinical training when one of my professors said something that stuck: Any strength taken too far becomes a weakness.

Once intimacy and cooperation become over-amped in a woman’s life, she is sure to come down with the proverbial “disease to please” — a problem that stems from believing that “everyone else’s needs are more important than mine.”

This is a topic my Band of Sisters has wrestled with on more than one occasion in our group of Friday Friends.

We’ve all read the trendy solutions in shiny magazines about how we need to take care of ourselves by going to a spa, pampering ourselves, and so on.

“I don’t think a ‘day of beauty’ is going to cure anybody’s disease to please,” said Bonnie. “Though a good massage can do wonders!”

“I’ll never pass up a massage,” Arlys joined in, “but you’re right — even my teenage daughter tells me I do too many things for too many people, that I don’t know how to say no.”

“Don’t you hate it when a teenager has more wisdom than you do?” Bonnie said with a grin.

“It’s such a cliché to say ‘Take care of yourself’ or ‘Learn to say no to things,’ ” said Joy. “Sure, that has its place, but I think there’s something much deeper going on than either of these solutions will cure.”

“Well, I think that sometimes we try to sacrifice ourselves because that seems like the ‘loving’ thing to do,” Joy continued. “Isn’t that ultimately what we mean by being Christlike?”

“I don’t think we’re supposed to sacrifice and go without as an end in itself,” said Bonnie.

“Of course not,” countered Joy. “That’s my point. We equate ‘loving like Jesus’ with giving ourselves up, as if that was the goal. It’s not. The goal is to love.”

“Right,” said Lori, “so then what is love if it’s not sacrificing something for others?”

“I think it’s mostly about not being selfish while still maintaining yourself,” said Tami. “And that’s a balancing act that’s hard to do. We get sucked into the myth of thinking that the more we sacrifice ourselves, the more loving we are.”

Jenny, thirty-eight, is a good example of exactly that mindset. Her husband David had made the appointment for her to see me, and he sat in on the session.

Looking at Jenny anxiously, David said to me, “I’m afraid she’s going to have a nervous breakdown. Ever since her mother moved into that retirement center, Jen hasn’t been the same. She goes to Little League games with our son, she coordinates the nursery program at church, she informally counsels countless women, and now she is taking care of her bedridden mother in a center that is designed to do that for her.”

“If I don’t help her, who will?” Jenny asked. The question hung between us like a wisp of smoke. “I mean, if I were in my mother’s shoes…” Jenny’s words broke down and gave way to tears.

David paused and looked at his wife, “Jen, you can’t say no! You’ve always taken on too much, but now that your mother is close by, it has put you over the edge.”

Still wiping at her eyes, Jenny said, “I know, I am doing an awful lot, but it’s just that —”

“Don’t say it’s just for a short time,” interrupted David. “You’ve been doing this for more than five months, and it’s taking its toll. Even your mom says stop! Enough is enough.”

Jenny is suffering from what I call “compassion fatigue.” She is engulfed in an overwhelming sense of responsibility and an almost bottomless well of desire to help. Guilt is camped out and lurking around her conscience, but she’s actually troubled not by the wrong she has done, but by the good she feels she has left undone.

Jenny is trying to help the people around her, but she is hurting the people closest to her by spreading herself too thin. Her heart is as big as a mountain, but she’s failed to see that she’s no longer giving the ones she loves what they really need.

You probably remember the biblical story of Martha, friend of Jesus. In fact, if you are like me, you’ve heard it a million times. It’s probably been referenced in nearly every book ever written for Christian women.

But it bears repeating, if only briefly, since it’s the clearest biblical example of a woman’s unexamined inclination to “please.”

The story begins when Martha opened her home to Jesus and his disciples. Martha scurried about making preparations to serve the men, while her sister, Mary, simply sat and listened to Jesus.

Finally Martha complained, “‘Lord, don’t you care that my sister has left me to do the work by myself? Tell her to help me!’

‘Martha, Martha,’ the Lord answered, ‘you are worried and upset about many things, but few things are needed—or indeed only one. Mary has chosen what is better, and it will not be taken away from her.’ ” — Luke 10:40-42

Martha, like many women, had become more concerned with doing loving things than with being a loving person. She was attending to everyone else’s needs, but she did not recognize her own need to sit at the feet of Jesus. Only later, when her faith in Jesus had grown, was she able to put aside her own worries and trust him even in the worst of circumstances — when her beloved brother Lazarus had died.

As women, our inherent inclination to nurture can cause us to mistake selflessness for love.

C. S. Lewis warns of the dangers of being immoderately unselfish: “Unselfishness carries with it the suggestion not primarily of securing good things for others, but of going without them ourselves, as if our abstinence and not their happiness was the important point.”1

Lewis also wrote an epitaph for a woman, Martha Clay, who thought she lived a life of love and service, never knowing that her “loving” deeds were driving her brothers crazy:

Erected by her sorrowing brothers
In memory of Martha Clay.
Here lies one who lived for others. Now she has peace. And so have they.2

Genuine love is not about doing without. Love may involve self-denial, but only as a means to meeting others’ needs.

We can give our bodies to hardship, as Scripture says, and still not be loving. (1 Corinthians 13:3)

So remember to take care of yourself.

In fact, if this disease to please hits a little too close to home, let me ask you:

What would you like to do for yourself if you weren’t caught up in taking care of everyone else?

You may not even know.

And if that’s the case, you are living a lie that says, “Everyone else’s needs are more important than mine.”

But don’t believe it. Your needs are critically important. If you do not identify your own needs, you can never effectively meet the needs of others, thereby making a difference.

A. Do you ever feel like you might be a “Martha Clay,” suffering from the “disease to please” and sabotaging your own good intentions? If so, how?

B. Think of a specific time when you were so spent, that you were, in all honesty, of little help to others? When and where is this most likely to happen with you?

Are you a Martha Clay? Consider the questions above and share your answers with us on our blog. We want to hear from you about loving others the way Jesus truly loved!