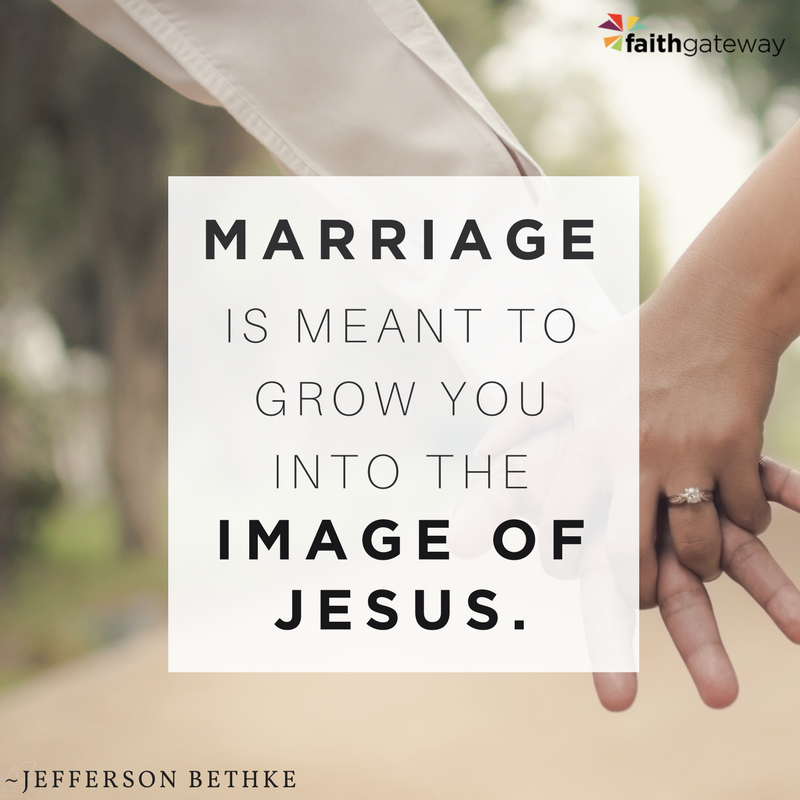 As a teenager and into my college years I wanted to be a lawyer. I had a natural inclination for debate, logic, reason and thinking outside the box. But just like any personality trait, a blessing can also be a curse. Without love, and grace and compassion, I could sometimes be mean without even knowing it. I could be all about the facts, not realizing my words also could hurt other people.

Through time I’ve come to realize it’s not just about what you say but also how you say it. And also, in a marriage, I’ve realized the mentality of needing to win is poison. Complete poison — and it can destroy any relationship. Alyssa and I have both committed to throwing the “I need to win” attitude in the trash. Why? Because a relationship isn’t about winning; it’s about love and growing.

Because at the end of the day, one of the quickest ways to a marriage that disappoints or disillusions is to get into a marriage thinking it’s about serving yourself. That the person on the other side of the aisle is there to make your life better, easier, and more comfortable. But sadly, that’s the mentality most of us have. We wouldn’t admit it, but our actions already do.

But what if there was a better way? What if marriage isn’t about taking but giving? About sacrifice instead of selfishness?

One of the big epiphanies that happened in our marriage was when a mentor led us to realize that in the disagreements, it’s not about winning or just wishing that person would be more like us. We think “if only they could just agree with me more” or “if only they thought how I thought then life would be easier.” And sure, it probably would be easier. But that’s not what marriage is for.

Marriage is meant to grow you into the image of Jesus.

In fact, you two are supposed to grow into one new image. That’s what the one flesh thing means. Two individuals becoming one new image — the image of Jesus. And so, if this is true, then that means disagreements aren’t opportunities for the other person to be more like you but actually opportunities for you both to grow into the image of Jesus. What if instead of thinking that the other person’s personality traits are weird or a bummer and you start thinking those traits might be what are making you guys a more well-rounded image? I know for Alyssa and me that’s us. That every disagreement I can now say, this is an opportunity to grow. To become more like Jesus. And to serve. Why? Because He served.

For example, I hate making the bed. I think it’s the worst thing ever and so unnecessary because it’s just going to get messed up again later that day when you go to sleep.

But guess what? Alyssa loves the bed being made every day. To her it’s a great way to start the day and make things feel fresh and orderly first thing in the morning.

So, for me, long ago I compromised. I said forget how I feel and my preferences. I want to serve my wife, and this is a way of doing that. And the beautiful thing, is that act of service then warmed Alyssa’s heart and spurred her on to serve me back in a myriad of other ways.

Service is contagious and creates a beautiful cycle. And usually it starts with compromising.

Another moment that sticks out to me when learning this first hand was an early memory in our marriage.

Alyssa and I were both sitting on the couch one evening. I remember her asking me nicely to go get something from the bedroom for her. Me, being selfish and tired and grumpy that night, decided to be dumb and say, “why don’t you go get it” or something to that effect. It then quickly escalated into each other being upset, grumpy, and rude to each other. I later apologized and felt so dumb, because it was the tiniest thing. And my reaction was not the tiniest thing. Isn’t it interesting how sin and selfishness does that?

And that was when a phrase from some of our married friends came into my head. A few weeks prior we were at dinner talking about marriage advice. And I remember them saying one of the best pieces of advice they got was “bring up little things in a little way, and big things in a big way.” It’s simple, but sadly overlooked. Looking back on mine and Alyssa’s relationship, so many petty arguments or breakdowns of communication have happened because our frustration about something wasn’t proportional to the actual issue at hand.

And so, Alyssa and I have made a commitment to that principle. And it’s made all the difference. And what it does too, is give us an excuse to bring up the little things in a little way before they turn out to be big things. Because a lot of times what will happen is something small will happen that hurt our feelings or upset us, and in our mind, we go “oh that’s no big deal. I need to get over it.” But if gone unsaid, that starts to add up and then later creates a very much disproportional response that makes things worse. Instead, we have committed to saying in the little things, “hey that little comment hurt me.”

Or “Not a huge deal, but I just wanted to let you know, that I feel overlooked today.”

Or “when I asked you to do something, it means a lot when you do, especially after a long day taking care of the kids.”

However, you may say it, make it proportional. Because in reality, those “little things” actually reveal something in your heart not theirs. Those little things are sometimes the pathway to quickly discover just how much you don’t look like Jesus yet. And one thing we need to make sure we don’t do in those moments is cave to shame. Shame is that slimy feeling that creeps up in the small mistakes and tells us we aren’t good enough, we aren’t loved, and we should go hide.

But notice how that was the very first thing the humans did in the garden when they first ate the fruit.

They hid. And what did God do?

He came looking for us. Walking in the garden. He pursued us.

And that’s what a marriage does. It doesn’t let the other person hide, but instead goes walking towards them in grace. And speaks life into their very bones. And that’s how you grow more into the image of Jesus. Day in and day out.

Watch the Trailer: Love that Lasts

Hear from Jeff & Alyssa About the Book

In your relationships, are you serving and loving even when you don’t automatically want to do so? Are you looking more like Jesus? Come and share with us on our blog! We want to hear from you about walking towards others in love! ~ Devotionals Daily