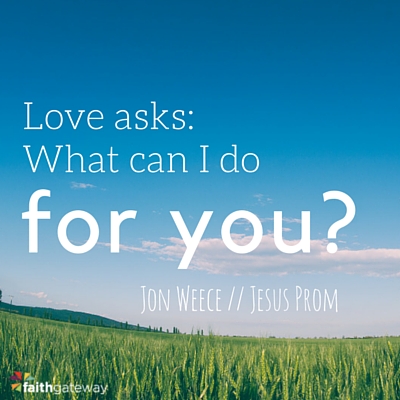 It was a Saturday morning. When I lived in Haiti, that’s when I went to the open-air market to buy my food for the week. I was standing in the middle of the street holding a bag filled with oranges, rice, and beans. And that was when I saw him.

It was as though a page had been torn out of a National Geographic magazine, then framed for me to stare at. His legs were disproportionate in size to the rest of his body, bent at angles unfamiliar to a healthy torso. His head was bowed in shame, but I could tell he was blind because his eyes never really fixed on any particular object. Rather, they danced from side to side and followed the noises around him. He was barely clothed, and his body was caked with dust and dirt. His hair was matted down from sweat, and flies took up residence on his skin. His hands were outstretched. He was holding a small bowl. He was begging.

I watched as one person after another passed by him… ignored him… pretended he didn’t exist. Then he pulled a small board from his bag and placed it in the sewage that ran beside the road. Blocking its flow, he did something I wish I could scrub from my memory. He placed his hands in the raw sewage and began to sift and search as if looking for something of value. While living in Haiti, I had watched a woman drink from a mud puddle and had caught two men eating garbage, but this was a new low.

My heart broke and scattered into pieces I will not recover this side of heaven. [tweet this]

I watched as he pulled out an old battery. He cleaned it off as if it were a rare artifact missing from a prestigious museum. He slid it under his leg like someone might come looking for it.

With tears streaming down my cheeks, I knelt down in front of him and took his dirty hands, placed them on my face, and in Kreyol said, “My name is Jon, and I want to be your friend.”

That’s all I could get out. I couldn’t talk, but he could. “Thank you,” he whispered.

“My parents broke my legs when I was a baby so that I could beg and bring in money for our family,” he said.

I filled his empty bag with my bagful of food. I filled his pocket with my pocketful of money. Love empties itself, because love emptied Himself.

That’s always the question love asks: What can I do for you?

Watch the Video for Jesus Prom

Look around today. Keep your eyes out for the person who needs love, needs help, needs encouragement, and ask them “What can I do for you?” just as Jesus did. Come share with us what happens on our blog! We want to hear your stories of being Jesus in action! ~ Devotionals Daily