Higher education has become exorbitantly expensive and inefficient, in part, because of a lack of accountability and pressure from students and taxpayers. As Heather MacDonald has written, even as California’s higher education budget withers on the vine, UC–Berkeley found $194,000 to pay its “vice chancellor for equity and inclusion.” That’s four times the starting salary of an assistant professor. And while UC–San Diego lost star cancer researchers to Rice University and eliminated MA programs in electrical and computer engineering, it added a diversity requirement that prizes “a student’s understanding of her or his identity,” especially focusing on “African Americans, Asian Americans, Pacific Islanders, Hispanics, Chicanos, Latinos, Native Americans, or other groups” through the “framework” of “race, ethnicity, gender, religion, sexuality, language, ability/disability, class or age.”

Bruce Bawer, an author and literary critic who happens to be gay, rejects the rise of identity studies in his new book The Victims’ Revolution: The Rise of Identity Studies and the Closing of the Liberal Mind: “Identity studies sum up everything that’s wrong with the humanities today. . . . Kids don’t learn anything other than to think of themselves as having been wronged by capitalism, by the West, by America, by white men.”

Bawer explains the historical and cultural consequences of immersing millions of our college students in such identity studies:

And with every kid who emerges from college possessing a diploma—and an idea of America derived not from the values of the Declaration of Independence and the Constitution but from the preachings of identity studies— the American miracle fades a bit more into the mists of history.

The rise of identity studies on college campuses has helped make tolerance and diversity the great mission of the universities. These expressions of political correctness are the intellectual mission of the university. When the sensitivities of different groups becomes a greater priority than intellectual inquiry, academic freedom becomes limited. For instance, a student at Indiana University–Purdue University Indianapolis was declared guilty of racial harassment merely because he was reading a book that celebrated the defeat of the Ku Klux Klan in a fight with Notre Dame students in 1924. Some university employees complained that the book was racially insensitive just because it featured a picture of a Klansman on the front cover. At the University of Wisconsin–Madison, a vice provost for diversity and climate encouraged students to disrupt an event in which the speaker voiced opposition to racial preferences.

Even many liberals realize how convoluted this sort of thinking can be. George Will profiled Greg Lukianoff, “a graduate of Stanford Law School who describes himself as a liberal, pro-choice, pro-gay rights, lifelong Democrat, who belongs to ‘the notoriously politically correct Park Slope Food Co-Op in Brooklyn’ and has never voted for a Republican ‘nor do I plan to.’” Lukianoff is the head of the free-speech advocacy group FIRE (Freedom for Individual Rights In Education), whose mission is to defend individuals unfairly constrained in their First Amendment rights on campus. Although Lukianoff would not be confused for being a conservative anytime soon, he understands the necessity of preserving the academic freedom to express unpopular, controversial, and politically distasteful opinions.

If the public knew how their tax dollars were being spent, surely they would be up in arms over how the university has failed to develop the moral habits of its students. Take, for instance, one of the modern inventions of the academy: the coed dorm. The Journal of American College Health found that 42 percent of students living in coed dorms binge drink each week, compared to only 18 percent of non-coed residents. Almost needless to say, the study found binge drinkers do worse in school, sleep less, and disrupt other students more. The study also reported more sexual partners and higher rates of pornography usage for students living in coed situations. According to one of the researchers, who controlled for a self-selection process (for example, religious students choosing to live in sex-selective dorms), “there was still something unique about living in a coed dorm that was associated with risk-taking.”

Some of the most vivid examples of the university’s moral unorthodoxy and detachment from reality appear in an article by Jeffrey Goldberg in the Atlantic. Goldberg reviewed the policies of several universities that addressed what to do if an “active shooter” (deranged killer) should penetrate the shortsighted “gun-free zones” that colleges label themselves. Of course, a sign declaring a “gun-free zone” will make no difference to a madman with intent to kill. But don’t tell the universities. The University of Miami advocates counteracting any incident by “improvising weapons” and “yelling.” West Virginia University encourages that students “act with physical aggression and throw items at the active shooter.” The list of recommended items is risible: “student desks, keys, shoes, belts, books, cell phones, iPods, book bags, laptops, pens, pencils, etc.”

Goldberg’s conclusion about why these policies are in place is accurate: “The existence of these policies suggests that universities know they cannot protect their students during an armed attack.” Our purpose here is not to impugn universities for restrictive gun laws, although we would welcome a change in that regard. Our purpose is to highlight the fantasyland the universities inhabit in thinking that symbolic gun-free zones will prohibit violence or that throwing belts and pencils will hinder the carnage of a man with a gun.

Is this learning environment worth the investment of $50,000, $100,000, or $200,000? Consumers make highly informed decisions when they’re buying a home: Is the neighborhood safe? Are the schools good? Where are home prices headed for this area? Can I get a better deal somewhere else? If students and parents are investing almost as much money into a college education as a home, they should make equally informed and careful decisions.

Thankfully, some within the ranks of higher education are beginning to look out for their consumers. John Garvey, the president of the Catholic University of America (CUA), has taken a truly bold stand against the dorm culture of drunkenness and promiscuity. In March 2011, he announced that all dorms at CUA would eventually revert to single-sex residence halls. Although recognizing how unpopular the choice was among students, Garvey was persuaded by the statistics to make the move, saying simply in an op-ed in the Wall Street Journal, “our students will be better off.”

The examples above illustrate in large part why many of today’s institutions of higher learning fail in their most basic responsibility—cultivating learning, skills, and critical thinking. Too many of today’s college students know more about sex, drinking, and partying than they do about history, literature, math, or science.

Too many of our college students are wasted, literally and figuratively. Regardless of whether the mission is preparing students for a job or developing their minds, too many colleges are failing. 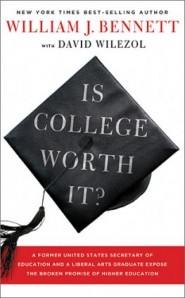