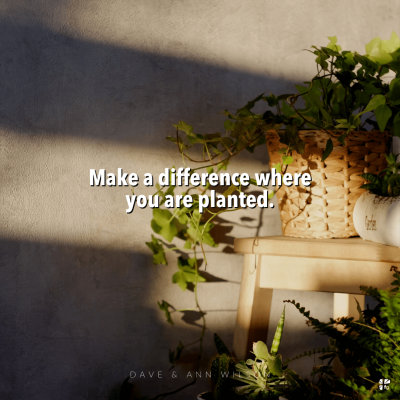 “Make a dent where they are sent” is a phrase we’ve often used when preaching at our church. We strongly believe that God has strategically placed each one of us to be His light. Jesus said it best when he told His disciples:

You are the light of the world. A town built on a hill cannot be hidden. Neither do people light a lamp and put it under a bowl. Instead they put it on its stand, and it gives light to everyone in the house. In the same way, let your light shine before others, that they may see your good deeds and glorify your Father in Heaven. — Matthew 5:14-16

The question most people want to ask is, “Okay, then, where am I sent?” The answer is profound in its simplicity: you are sent where you are. The job you have, the house or apartment or condo where you’re living, the school you’re attending, the sports team your kid is playing on — these are where God has strategically placed you right now. Make a difference where you are planted. Make a dent for Jesus.

I was a coach on all three of our sons’ football teams from their Pee Wee leagues up through high school. It was one way I chose to be a part of their lives. After our high school games on Friday nights, the coaching staff usually headed to a local pub to talk about the game. As a pastor, I felt that a bar wasn’t the best place for me to be seen with my coaching buddies, and yet I knew that God had called me to make a dent where I was being sent — which meant He had sent me to do life with these coaches and their families.

One Friday night after a victory, I called my buddy Rob, a fellow believer on the coaching staff, and said, “We need to be at the bar with the coaches.” He agreed, and off we went to drink our Cokes with the guys. When we walked into the bar, the coaches stood up and gave us a standing ovation. They were that excited we had joined them.

I sat next to our special teams coach, Jack. He asked me why I never cussed while coaching the team. Not cussing may be a little thing that doesn’t make me more righteous than anyone else, but regardless, it gave me the chance to share how Jesus changes all parts of a person’s life. I told him how I had gone from being a man with a foul mouth to the person I was in the present only because of Jesus.

This was the first of many conversations with Jack that led to more questions about faith. A few months later, Jack surrendered his life to Christ. Along with his wife and kids, Jack now serves at our church. God began this change in Jack by leading me to hang with him at the local bar.

God wants to use you and your children right where He has planted you. There is truly no higher calling than to be able to pass on such a vision to your kids in a way that is life-changing for them and for you.