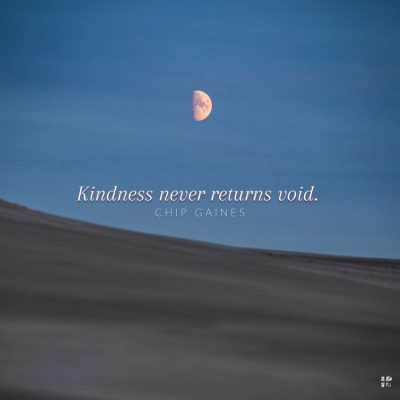 The power of kindness was not a new thought to Jo and me. This concept is echoed in our Magnolia Manifesto, a series of statements that lead out the work we do as a company, serving as a lighthouse of sorts. No matter the conditions, these words guide us home. A line from that manifesto kept popping into my head:

We believe in human kindness, knowing we are made better when we work together.

What opportunities to treat people with kindness had I missed? Maybe the implications weren’t always so dire, but where could I have tipped the dominos, so to speak, if I had only stopped to consider it? So many times it’s not that people don’t care to be kind; it’s that life is moving too quickly for us to stop and think about how an outpouring of kindness could start. We’re hurrying home to make dinner, we’re late to pick up the kids from practice, we’re swamped at work, we’re stuck in traffic. Any thought given to someone else (and how we might change their day for good) gets buried under the noise and stressors of what we have going on in our own lives.

I didn’t want to get tangled up in the shouting match about gun control and mental health issues, but I knew I had to do something. It occurred to me: What good is this network I’ve built if I don’t rely on it… right now? Still, Jo and I realized that using our platform would only go so far. We needed to involve more people, knowing that true power is not in the “me” but in the “we.”

I wanted to work through this with the people around me — a process I’ve always found helpful — so Jo and I rallied the Magnolia team together to hear their thoughts. We all came to the conclusion that the challenge was right in front of us: make kindness louder.

I’m not talking about kindness in terms of grand gestures or the goodwill that comes on special occasions or holidays. I’m talking about day-to-day interactions that offer a glimmer of love or hope. The kind of goodness that abounds in equal measure for a loved one and a stranger on the street, people on both sides of our bubbles. That’s the kind of kindness that can tip the dominos in the opposite direction.

A subtle reminder is sometimes all it takes. A nudge to do just one small thing. At Magnolia we made up four fliers with pull-tabs suggesting practical ways to show kindness. We shared them on social media so people could print them out and also offer this idea to those in their own networks. Two of the flyer templates had general acts of kindness, those you could use around the home or office. The third flyer was geared toward kids, and the fourth was blank, which we hoped would empower people to think of even more ways to help.

Mow a neighbor’s lawn.
Write a letter of thanks to a first responder.
Stop and ask a person experiencing homelessness their story.

We knew we weren’t reinventing the wheel, but we hoped that something tangible — that little slip of paper — might burn a hole in someone’s pocket until they decided to act on it.

Within hours, the post took off. People all over the world downloaded the flyers, and we were blown away by the responses and stories that people sent in using the hashtag #makekindnessloud.

Make your own kindness flyer for your fridge to remind you to perform random acts of kindness. Make a practice of pulling off a tab any time you feel a kindness deficit in the world.

Here are a few ideas to get you started:

We tend to think that kindness is easy. Soft. Nice. It’s something you learn in kindergarten — how to say “please” and “thank you” and share your Goldfish crackers. Kindness has gotten a rep of being like Glinda the Good Witch, all gentleness and smiles. Someone with a “No, please, after you, I insist” type attitude. It’s easy to think, That’s just not me. I’m not a pushover, I’m not constantly in a good mood, and I’m not always patient and nice. But real kindness is built with grace and grit, and I don’t think one works without the other; they are wisely intertwined. Because life-changing kindness is hard. Sometimes so hard it hurts. It’s sweat and effort. It actually requires something of you. That’s kindness that inspires, kindness that makes a difference.

In the story of the widow’s mite in the Bible,1 Jesus watched at the temple in silence as rich men made donations — some of them quite large — into the treasury. But then a poor widow placed two small copper coins in the box, barely a fraction of a penny. That was when Jesus spoke up, saying that this woman had given more than any of the others, even the richest of them, because she had made a true sacrifice.

How many times have you stopped short of giving because it would require something slightly inconvenient to you, maybe something as small as creating an account and a password to donate to a worthy cause?

Ninety-nine percent of kindness, of generosity, of fairness, of justice is follow-through. It requires sacrifice. It is uncomfortable. You hold the door for an older person on their way out of the grocery store — that’s kind — but when you help load their groceries into their car, even though you’re already running late, that’s uncomfortably kind. A teacher who gives a struggling student an extra-credit opportunity — that’s kind. Coming in early every day to go over her lessons is uncomfortably kind.

If we are going to belong to one another again, we need to get comfortable with being uncomfortably kind. #makesense

During the recent protests surrounding the Black Lives Matter movement, a local woman tweeted at me. In a totally nonconfrontational way she asked if Magnolia would consider making a percentage of our vendors at our upcoming vendor fair Black-owned businesses. It took about two seconds for me to say yes. That part was a cinch. That was easy kind. The hard part, the uncomfortable part, was following through by doing our due diligence to find and invite vendors in an honorable way, and making sure their businesses wouldn’t be overwhelmed by the bump in volume that could come. It made more work for our staff, but it was worth it a thousandfold. Society would have us believe that we have to be cutthroat to excel in business and in life, but I’ve learned to place my bets on a different theory:

When we push the borders of the bubble far enough, it eventually bursts. That’s when we can see what has been true all along — there is no difference in worthiness between those inside the bubble and those outside. We all belong to one another, and there’s no good reason why kindness shouldn’t blanket and protect us all. It’s like the old Irish proverb that says, “It is in the shelter of each other that the people live.”

I read a great story that illustrates what can happen when you break through your bubble. In early 2020, Qasim Rashid was running for Congress in Virginia. As he was campaigning he received a lot of support, but he was also on the butt end of a lot of upsetting anti-Muslim comments. One day, a guy named Oscar Dillon blasted out a tweet, the gist of which was that Rashid was not welcome in America.

Anyone who has ever been on the internet knows how these exchanges usually go down — someone says something incendiary, then someone who disagrees either makes an impassioned argument or they hit back with bombs lobbed at the opposition, which usually just results in more name-calling and spite. Rashid took a different tack. He did a little research and saw that Dillon was having medical issues and had set up a GoFundMe to pay for his mounting bills. Dillon had absolutely gutted his retirement savings and was now having to dip into his wife’s savings to cover the costs. When Rashid saw that, instead of firing back at Dillon, he took a risk. He set aside his own hurt, gave up his own affronted dignity, and decided to get uncomfortably kind. He donated to the GoFundMe — and then encouraged his supporters to do the same. Within weeks, the campaign was up to $20,000.

Dillon watched donations racking up, just staring at his screen in shock. He couldn’t believe that Rashid had reached out to take his hand given the way he’d treated him. He asked Rashid to meet, and when they did, they spoke openly to each other, and Dillon apologized for his tweet. Not only that, he invited Rashid to put campaign signs in his yard!2

When Rashid made the choice to see Dillon as a person, to look at his life as a whole, to understand where he might be coming from, it made all the difference. I genuinely believe that the more we operate in this kind of mindset, believing the best about people, the more likely it is that those people will believe the same in others. That’s another thing about kindness: it’s contagious.

Our collective kindness can become louder than any individual acts of hate. But that’s only if we don’t let ourselves go numb. Only if we expand our bubbles until they disappear. If we ask the hard questions. What pain does the world have that causes me to ache? What small thing can I do about it today? Maybe in that process you help someone who was so lost they were headed down a path that would have been destructive to themselves or to a whole bunch of people. We must build up instead of tearing down. So much of what we know is broken. The way we treat our neighbors. How we speak to one another. And we have to start moving back to a place of love and civility. A place of concern and respect.

Jo and I want to operate with the kind of love and kindness that lends itself to rolling up our sleeves and working hard. If we’re doing it right, we’re all in the restoration business.

Kindness asks us to look each other in the eye and see one another as valuable human beings. This begins at home, in our own networks and communities, with a steadfast belief that we are made better when we believe the best about each other.

Acts of kindness often occur in the absence of witnesses. We also can’t always see the immediate effect. But rest assured, if the conditions are right, kindness moves and shifts like wildfire, and its beauty lies in its potential to spread. To catalyze a series of reactions that can transform how we care for one another.

The spark has to begin somewhere. Let it begin with you.

Excerpted with permission from No Pain, No Gaines by Chip Gaines, copyright Chip Gaines.