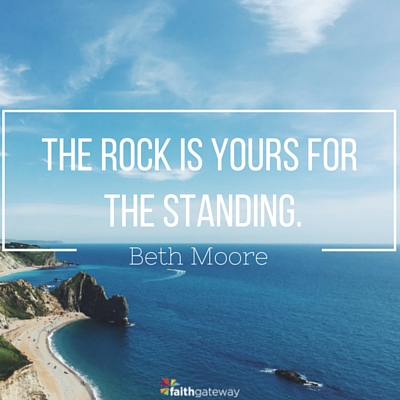 Make Up Your Mind That You’re In with God

God is unreasonably patient and merciful. He’s there for every urgent need and any sudden spell, but an emergency room relationship with God is not the psalmist’s idea of a firm place to stand. He’s not a drive-thru drugstore. He is not just a temporary fix in an urgent situation, a fast way to get everyone to forgive us, or a good side to get on when we need Him to save our scrawny necks.

God can hold your weight — the full emotional, spiritual, mental, and physical poundage of you — sixty seconds a minute, sixty minutes an hour, twenty-four hours a day, seven days a week, 365 days a year for the rest of your life.

I want to emphasize that phrase, the rest of your life. God is not just a firm place to stand. He’s a firm place to stay. My book [Get Out of That Pit] is not about getting out of the pit for a while. It’s about getting out of the pit for good. And if that’s what we want, we’ve got to do something absolutely crucial. We’ve got to make up our minds. The ground beneath our feet will be only as firm as our resolve. As long as we’re wishy-washy, what’s under us will be wishy-washy too. God gives us a firm place to stand, but we have to decide we want to take it. John 3:16 tells us that “God so loved the world that He gave His only Son,” but He doesn’t force anyone to take Him either. God is ever the Giver (see James 1:17) but, by His sovereign design, each individual gets to exercise the prerogative whether or not to be a taker.

We take the firm place He gives when we make up our minds and plant both our feet. That’s exactly what the Hebrew word translated “firm” in Psalm 40:2 means. In another psalm it is used to characterize man’s response to God. Psalm 78 speaks of a generation who:

would put their trust in God and would not forget His deeds but would keep His commands.

They would not be like their forefathers — a stubborn and rebellious generation, whose hearts were not loyal to God, whose spirits were not faithful to Him. — Psalm 78:7-8

You see that word “loyal”? It comes from the very same Hebrew word as “firm.” God’s complaint with the Israelites in Psalm 78 was their inability to make up their minds about Him. Were they with Him or not? Did they want a firm place to stand or an emergency room to visit? Like us, they wanted God when they were in trouble, but as soon as the pressure let up, they wanted to chart their own course and be their own boss. The momentary revelry of their rebellion turned into terrible bouts of captivity and consequences. They experienced what we do: the slide into the pit is the only thrill ride. From that point on, a pit’s just dirt.

At its very core, loyalty means a made-up mind. It means that certain questions are already answered before life asks them. Since it shares the same definition as “firm,” “loyal” in Psalm 78 means to be “sure… certain… ready… prepared… determined.” It means we’ve settled some things in advance of the inevitable temptation to revert or destructively scratch a temporary itch. It means we don’t wait until the heat of the moment to decide. You know what I’m talking about. A loyal spouse doesn’t wait until someone flirts with her at work to decide if she’s going to be faithful. She has already made the decision to stand by her man before a circumstance posed the question.

That’s how God is about you. He’s firm. He’s loyal. He made up His mind about you before the foundation of the world. Regardless of who has betrayed you and what promises they didn’t keep, God is firm in His commitment to you. Circumstances don’t cause Him to rethink His position. Even if you, like me, have made multiple trips to the pit, His affection for you is unwavering. He’s all yours if you want Him.

I’ll tell you why I’m hammering the point. Until you finally make up your mind that you’re cleaving to God and calling upon His power from now until Hades freezes over, your feet are set upon a banana peel. You may stand while the wind is calm, but when the storm hits and the floodwaters rise, the undertow will leave you gulping for air.

Case in point: my friend with a fierce drug dependency problem spoke to me recently of her extreme frustration with relapses and her confusion concerning her intermittent bouts of victory. She explained that she does “so well in between” crises. She gets along great as long as her ex-husband doesn’t do something to remind her of rejection. She stays consistent as long as her kids don’t have problems in school. She pedals along beautifully if she can pay her bills. She thinks that if she could rid herself of the problems that tempt her to drug use, she could stay on her feet.

The problem is, life on Planet Earth consists of one crisis after another. Beloved, this I promise you. Circumstances will offer unceasing invitations back to the pit. If our souls had no enemy, life on clay feet would still be hard. But the fact is we do have an enemy, and he formulates one scheme after another. He knows how to trip your switch. He finds your Achilles’ heel, and that’s where he aims his darts. And if he’s anything at all, he’s a great shot.

You can insulate yourself from the temptation for only so long. At some point you have to get out there, plant your own two feet upon that rock, and resist. Once, then twice. Ten times, then twenty-five. Thirty times, then fifty till your flesh submits and your enemy gives up on that front and quits. Sooner or later, relying on the power of Christ acting through you, you’re going to have to face your foe and win. You can’t just run from him and hide, because he’ll keep showing up wherever you go.

Wherever you go, there’s a foe. Hurricanes in Houston. Tornadoes in Kansas. Earthquakes in California. Avalanches in Everest. Tsunamis in Asia. Welcome to life on our planet. The same gravity that sticks our feet to the floor throws curve balls through our air. One day we’re well. The next day we’re sick. At Christmas we get a bonus. In January we’re in debt. If your victory depends on the right circumstances, you may as well wave the white flag and surrender to defeat. Just go ahead and take that snort. Gulp that fourth gin and tonic. Binge and purge that pizza, a side of garlic bread, and half gallon of mint chocolate chip. Sleep with that jerk again. Eat, drink, and be miserable.

Or you could make up your mind that you’re in with God, standing upon that rock, for the rest of your days. The apostle Paul called it being found in Christ (see Philippians 3:9). No matter how long it’s been since you’ve seen me, He is where you can find me. Whether my health flourishes or fails, that’s where I’ll be. Richer or poorer, I’ve made up my mind. In the light of day or dark of night, find me in Christ. Spouse or not. Kids or not. Job or not. I’ve made up my mind.

When you’ve made that decision and given your heart, mind, and soul in all their fissured parts; and when you’ve given your past, present, and future “to Him who is able to keep you from falling” ( Jude 1:24); and when you know you’re absolutely in, come what may… congratulations, Sweet Thing. You’re out of the pit and your feet are on a rock.

Having a firm place to stand doesn’t mean life isn’t hard and temptations don’t come. It doesn’t mean you get everything right. It doesn’t mean you don’t sin, although you won’t be able to wallow in it like you used to. It just means you’ve determined your position no matter what comes your way. You may sway back and forth. You may curl up in a ball or buck like a bronco. But you’ve decided where you’re putting your feet. And once you’re there, it’s a mighty firm place to stand.

Excerpted with permission from Get Out of That Pit by Beth Moore, copyright Beth Moore. Published by Thomas Nelson.

Do you long for a firm place to stand? A heart at peace no matter what troubles come? Have you made up your mind that you’re in with God no matter what happens? Come join the conversation on our blog. We want to hear from you about determining to trust God.