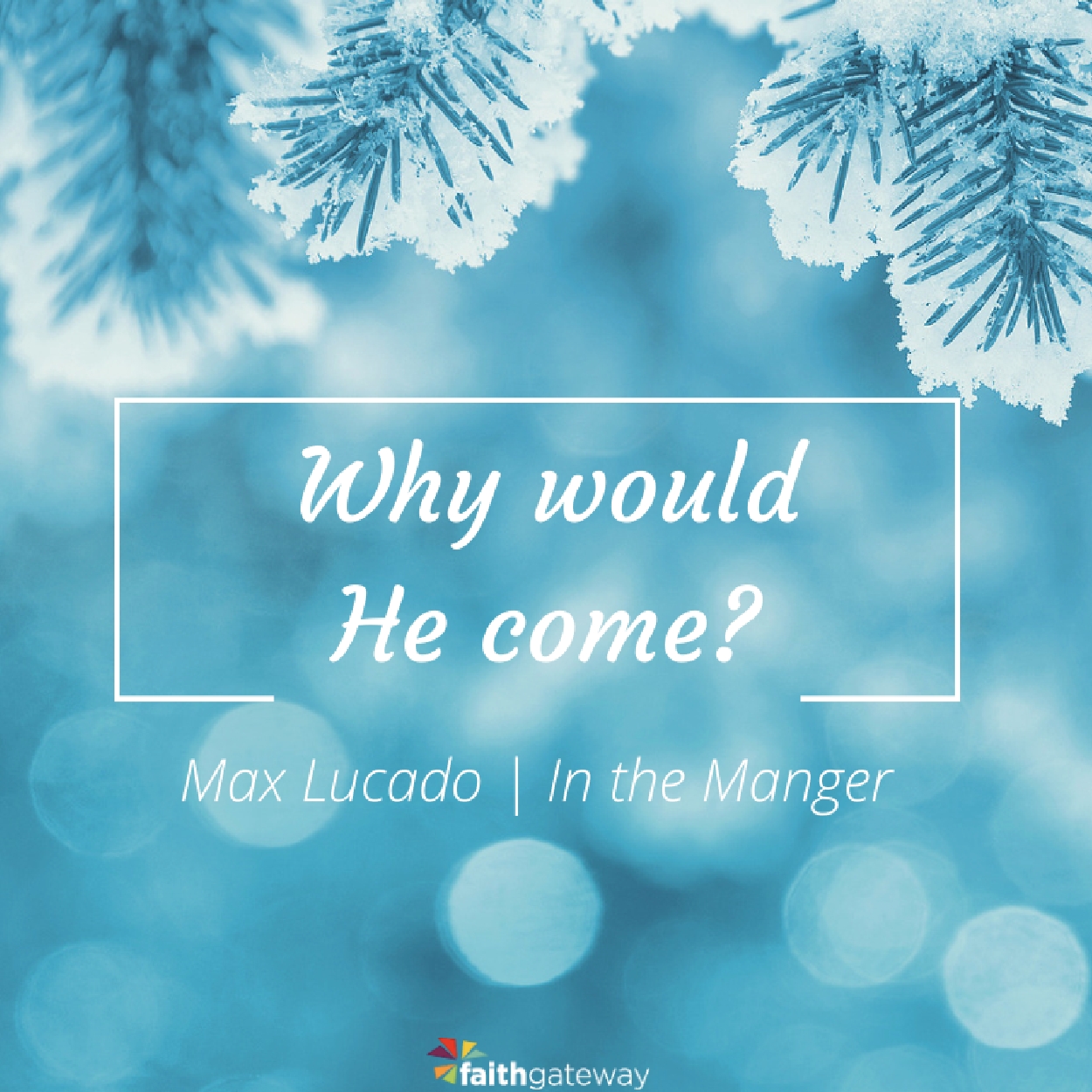 Christ Himself was like God in everything… But He gave up His place with God and made Himself nothing. He was born as a man and became like a servant. — Philippians 2:6-7 NCV

Why? Why did Jesus travel so far?

I was asking myself that question when I spotted the squirrels outside my window. A family of black-tailed squirrels had made its home amid the roots of the tree north of my office. They watch me peck the keyboard. I watch them store their nuts and climb the trunk. We’re mutually amused.

But I’ve never considered becoming one of them. The squirrel world holds no appeal to me. Give up the Rocky Mountains, bass fishing, weddings, and laughter for a hole in the ground and dirty nuts? Count me out.

But count Jesus in.

What a world He left. Our classiest mansion would be a tree trunk to Him. Earth’s finest cuisine would be walnuts on Heaven’s table. And the idea of becoming a squirrel with claws and a furry tail? It’s nothing compared to God becoming a one-celled embryo and entering the womb of Mary.

Why Would He Come?

Why? He loves to be with the ones He loves.

Dr. Maxwell Maltz tells a remarkable story of a love like this. A man had been burned and disfigured in a fire while attempting to save his parents from a burning house, but he couldn’t get to them. They perished. He mistakenly interpreted his pain as God’s punishment. The man would not let anyone see him — not even his wife.

She went to Dr. Maltz, a plastic surgeon, for help. He told her not to worry. “I can restore his face.”

The wife was unenthused. Her husband had repeatedly refused any help. She knew he would again.

Then why her visit? “I want you to disfigure my face so I can be like him! If I can share his pain, maybe he’ll let me back in his life.”

Dr. Maltz was shocked. He denied her request but was so moved by her love that he went to speak with her husband. Knocking on the man’s bedroom door, he called loudly. “I’m a plastic surgeon, and I can restore your face.” No response. “Please come out.” Again there was no answer.

Still speaking through the door, Dr. Maltz told the man of his wife’s proposal. “She wants me to disfigure her face, to make her face like yours in the hope that you let her back into your life. That’s how much she loves you.”

There was a brief moment of silence, and then, ever so slowly, the doorknob began to turn.

The way the woman felt for her husband is the way God feels about us. But He did more than make the offer. He took on our face, our disfigurement. He became like us. Just look at the places He was willing to go: feed troughs, carpentry shops, badlands, and cemeteries. The places He went to reach us show how far He will go to touch us.

He loves to be with the ones He loves.

Great God of the universe, I am amazed that You would leave the glory of Heaven and become like me. I come to You with my disfigurement and ask You to touch me with Your love. I want to be with You as well. In Jesus’ name, amen.

Excerpted with permission from In the Manger by Max Lucado, copyright Thomas Nelson.

Do you feel like what you’ve done or what has been done to you has scarred you too much to be loved? Maybe even that you deserve that isolation? God loves you and wants to be with you. No matter what. He delights in you and loves you. Count Jesus in. Come share with us on our blog. We want to hear from you about Jesus’ astonishing love. ~ Devotionals Daily