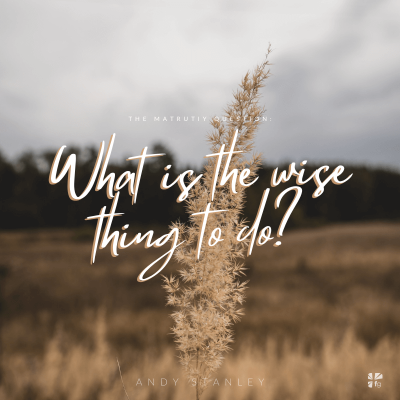 What is the wise thing to do?

What is the wise thing for me to do? We’ve never met, but here’s something I know about you. Your greatest regret…

And I’m talking about that moment of regret. The moment you would give anything to go back and relive or undo. The tipping point. The point of no return. Your greatest regret was preceded by a series of unwise decisions. They weren’t wrong. They weren’t illegal or immoral. But looking back, they were terribly unwise. And it was that series of unwise decisions that paved the way to the moment in time you’ve regretted ever since.

Right?
How did I know?
It’s the way of things.

Because there isn’t a “Thou shalt not” attached to it doesn’t necessarily mean “Thou shalt.”

It’s foolish to live on the border of what’s permissible, legal, acceptable, not prosecutable.

The apostle Paul, in a letter to Christians living in Ephesus, writes:

Be very careful, then, how you live — not as unwise but as wise, making the most of every opportunity, because the days are evil. — Ephesians 5:15-16, emphasis added.

Two things stand out about Paul’s instructions. First, how relevant his two-thousand-year-old advice is today. Some things never change. Human nature never changes. Ancient folks were as prone as we moderns to snuggle up to disaster and stay there as long as possible. But perhaps the most remarkable thing about Paul’s instruction is what he doesn’t say. Paul was a Pharisee. He had known and taught the Jewish Torah his entire adult life. Once he became a Jesus follower, his perspective of the Jewish law changed, but he didn’t abandon the moral, ethical, or relational guidelines he was raised with. As a Jesus follower, Paul was well aware that Jesus had actually raised the bar rather than lowered it. This is what makes his instructions to Ephesian Christians a bit surprising. We would expect Paul to anchor his readers’ decision-making to something more specific and concrete than wisdom. But he doesn’t. And he tells us why.

And this is important.

He was aware of what each of us has already discovered. The point of regret is always preceded by a series of unwise decisions. With that in mind… with that in the background of his own life… he says:

Be very careful how you live.
To state it in the negative, Don’t be careless how you live. Then he leverages our word:

Not as unwise, but as wise.

With those six words, Paul discloses the criterion by which he and we are to weigh our options. This is the grid through which we are to evaluate every invitation and opportunity. This is the standard, the yardstick by which we are to assess our financial, relational, and professional decisions. And thus our question:

What is the wise thing to do?

Paul follows up with a bit of explanation and motivation:

…making the most of every opportunity,

Literally, redeeming or ransoming the time. Don’t you wish you could go back and somehow reclaim all the time you wasted on bad decisions along with the time spent making up for bad decisions? I do. For you that may be a few weeks or weekends scattered about your past. Or it may be an entire season of life. Either way, imagine having the opportunity to re-live, re-spend, or re-allot those days, weeks, or years. What if you had an opportunity to go back and invest that time in productive, healthy, life-giving activities? Imagine where you might be today. Imagine how different things might be. And while we’re daydreaming, imagine being able to reclaim and reinvest all the money you wasted during those seasons.

Yeah, sorry to bring that up.

As painful and as awkward as it might be to look back, it’s necessary to understand the invitation embedded in Paul’s words. Paul’s words are an invitation to invest your time wisely going forward. From this moment on, you are invited to make the most of… to redeem… to leverage your most important asset, your time, in a way that propels you toward a preferred future. That invitation is fueled by wisdom, being careful rather than careless.

Paul offers another bit of motivation to his instruction as well. He warns:

…making the most of every opportunity, because the days are evil.

Evil days?
What’s he talking about?
We don’t live in a morally neutral culture. Bet you knew that.

ASLEEP AT THE WHEEL

Every day we interface with a culture that encourages us in the most provocative ways imaginable to satisfy appetites that can never be fully and finally satisfied. Long gone are the days when you had to go looking for trouble. Trouble is always just a click away. Right? Again, Paul’s words are so relevant. We can’t afford to be careless. We don’t live in a morally neutral environment. It’s not safe out there. Most Americans are overweight and overleveraged. We eat too much and spend too much. American men spend billions of dollars… billions… every year looking at pictures of women on their computer screens. That’s as amazing as it is embarrassing.

Like the Ephesians in Paul’s day, we live in morally and ethically perilous times. The days are evil. If we don’t pay attention, if we aren’t careful, we will end up paying a price for our carelessness. If we aren’t intentionally cautious, we may end up unintentionally corralled by a vice we’ve always condemned. If we don’t filter our choices through this powerful question, we will more than likely find ourselves face-to-face with consequences that could have been, and should have been, avoided.

To state it plainly…

Our world is a bit like the beautifully manicured grass outside my kitchen door where we let our dog out to do her business every morning and evening. If you’re not careful how you walk, you’ll step in it. Worse, you’ll bring it into the house!

THIS IS YOUR WAKE-UP CALL

I’ll be honest. The challenge with the wisdom question is that it forces us to face up to the very thing or things we are trying to ignore. It’s like an alarm clock for our consciences. A wake-up call for our souls. It’s irritating, but necessary. Perhaps it was the universal propensity to wear out our internal snooze buttons that drove the apostle Paul to continue with these words:

Therefore do not be foolish…

If punctuation had been available in the first century, this phrase may have come with double exclamation marks. “Do not be foolish” is a polite way of saying, “Don’t be a fool! Don’t approach life as if you lived in a morally and ethically neutral environment!” From there he commands readers to do something that appears to be impossible.

You can’t command someone to understand something, can you? I had a Greek teacher in college who would have us come up to the front of the room and translate out loud for the class. There I was with my paperback copy of The Iliad standing in front of my peers bluffing my way through some incident from the Trojan War and filling in the gaps with my own editorial comments. When it became evident that I was no longer translating but merely telling the story from memory, Mrs. Cuntz would stop me and say, “Mr. Andy, I don’t think you are translating. Translate!”

To which I would reply: “Mrs. Cuntz, I can’t translate it.”

Her reply was always the same. “Yes, you can! Now translate it for us.”

She insisted we understood more than we did, as if her insistence would somehow increase our capacity. It didn’t. Eventually she would wave us back to our seats. I always felt like Mrs. Cuntz took my lack of understanding personally, like she had failed me as a teacher.

Paul’s command to “understand” God’s will is an exhortation to face up to what we know in our hearts we ought to do. We are masters in the art of self-deception. So Paul, leveraging the grammar of his day, reaches off the page, grabs us by the collar, pulls us up close, and shouts, “Quit playing games! Quit pretending. Quit rationalizing! Face up to what you know you ought to do! Ask the question and embrace the answer!” This is Paul’s final attempt to get us to admit what we know and act on it.

As commonsense as all this sounds, truth is, most folks don’t make the wise choice until it’s their only choice. By then they’re attempting to reclaim something they’ve lost or are about to lose. Like you, I have friends who changed their unhealthy eating habits overnight after a brush with cancer or heart disease. Lumps, clogs, or shortness of breath forces us to face up to what we’ve refused to acknowledge for years. Revelations such as these often lead to death-defying discipline.

But why do we wait?

To leverage Paul’s words, we wait because we are unwilling to face up to what we’ve known all along. When we quit lying to ourselves, it’s amazing what happens. Everyone I know who has undergone a transformation following a health scare says the same thing: “I should have made these changes years ago.”

Translated: “For years I refused to face up to what I knew in my heart was true.”

Bankruptcy can have the same effect. So can a surprise pregnancy, a letter from your spouse’s attorney, a DUI, or a trip to detox with one of your kids. And perhaps that’s what it will take. There is something out there somewhere that has the ability to get your attention, something that will force you to face up! Unfortunately, that something may scar you as well as scare you. You may be left with limited options and reduced opportunities. So why let things go that far? Why not face up now to what you know in your heart you need to do? Why not ask, What is the wise thing to do?

How often do we operate as if there needs to be a Thou Shalt Not in order for us to not do it? Why not ask what is the wise thing to do instead? Come share your thoughts on operating in the wisdom of the Lord on our blog. We want to hear from you! ~ Devotionals Daily