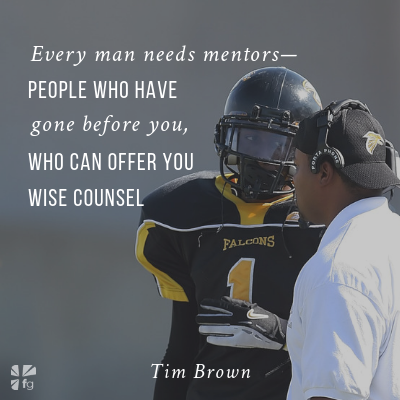 Editor’s note: Every year, the Heisman Trophy is awarded to the best player in college football. Over the weekend, Oklahoma quarterback Kyler Murray took home the prestigious award for the 2018 season.

Back in 1987, it was Hall of Fame wide receiver Tim Brown who won the Heisman. In this excerpt from his book The Making of a Man: How Men and Boys Honor God and Live with Integrity, Brown shares about the impact of mentors in his life and how he couldn’t have achieved the success he did without them. He reminds us all of the vital need for mentoring in the life of every man.

Young kids with positive male role models have something to live for, somebody who is proud of them, somebody who cares about their well-being.
– DONALD MILLER

The majority of the college football preseason publications had me as their Heisman Trophy frontrunner for 1987. Notre Dame even pitched in by creating “Heisman Hankies” that were mailed to the media. What most got people’s attention, however, was Sports Illustrated. The magazine editors put me on the August 31 cover along with the headlines “Notre Dame’s Mr. T” and “Tim Brown: Best Player in the Land.” It was pretty heady stuff for a guy who not too long before hadn’t even thought about playing college football. The funny thing was that Sports Illustrated was (and still is) famous for having a cover jinx—if you appeared on the cover, bad things were supposed to be around the corner. Plenty of guys on the team said to me, “You can forget about winning the Heisman now.”

Which, in a way, is exactly what my teammates and I did. Notre Dame hadn’t had a good season for a long time. We knew we had the potential in 1987 to do something special. Everybody else was talking about the Heisman, but in the locker room, it was hardly mentioned. The focus wasn’t on winning awards but on winning games, which was just the way I wanted it.

To help us keep our focus in the right place, Coach [Lou] Holtz called me into his office before the season. Now that I was a senior, I looked forward to the chance of being a team captain. We had only three captains, one each for offense, defense, and special teams. I saw it as a prestigious honor, and since the players voted on the title, it was a sign of their respect. So I was taken aback when Coach Holtz said, “Tim, I don’t want you to be a captain this year.”

He explained that I was about to get a world of media attention, and as a senior and team leader, I would surely be voted in by the players. But he thought it would be better for the team if someone else was in the position. There would be one more guy who felt especially important to the team and who would have a chance to talk to the media. It would also take some pressure off of me, putting me in a better position to just concentrate on playing well and helping the team.

I wasn’t too excited about the idea at first, but the more I thought about it, the more it made sense to me. It was an example of the way Coach Holtz was always looking at what was best for each of his players and for the team as a whole.

I don’t have the words to express the impact [Coach Holtz] had on my life. Before he came to Notre Dame, I’d never even thought about playing football professionally. When a man comes into your life and shows you something about yourself that you didn’t know was in you, it’s remarkable. The apostle Paul did that for Timothy, encouraging him to preach and teach and reminding him, “Do not neglect your gift” (1 Tim. 4:14). Paul was a mentor to Timothy, ready to point out the gifts of his protégé and willing to help develop those gifts and pass on his knowledge.

Lou Holtz did the same for me, as well as for a whole lot of other guys. That’s what a mentor does. I’ll always be grateful that he inspired me to believe in myself.

Lou Holtz was one of the most influential men in my life at that time, but he wasn’t my only mentor. Despite our falling out when I was almost thirteen, my dad was still someone I looked up to in many ways. My brother, Wayne, was in that same category. He was the first person in our family to graduate from college, and he always seemed able to expound on any subject. I used to think, Man, this guy knows everything.

There was another man who had and still has a tremendous impact on my life. I think of him as my spiritual mentor. His name is Lafayette Whitley Sr., better known to me as Pastor Whitley of our home church in Dallas.

I’ve known Pastor Whitley and attended his church since I was twelve. I appreciate his love for and commitment to God and the church. He has always been consistent in his spiritual approach. He preaches from the Bible and doesn’t embellish his messages with weird interpretations. He’s also always been consistent with me. Whether I was just a teenager or a famous football player, he has treated me the same. That was important to me, especially as my world changed when I moved from high school to college to the pros. I knew my dad wasn’t spiritual. I needed a man to be that spiritual rock for me, someone I could count on to always steer me in a godly direction.

It’s interesting now to look back on who I was that summer before I left home to start my NFL career. I was almost twenty-two and about to come into a great deal of money. I’d worked hard to get my degree and to earn my status as a sought-after football player. Now the selfish part of me was saying it was time to enjoy myself—girls, cars, maybe whatever else came along.

But at the same time, the spiritually mature part of me was saying I needed to visit my pastor and talk about this. So that’s what I did. I sat across from Pastor Whitley in his office at the church. The self-centered part of me wanted to hear, “Tim, go enjoy your life. Have a great time. God understands your heart. I’ll catch you in church when you’re back home.” I secretly wanted his blessing on my plans.

That’s not what happened. Instead, Pastor Whitley said, “God has put you on this platform for a reason. It’s not to catch footballs. It’s for you to bring more people to Him.”

Those weren’t the words I wanted to hear. I thought, C’mon, pastor, help a brother out! Yet that conversation with Pastor Whitley became one of the most important meetings of my life. It set me on a course, and though I took a few detours, it’s still the course I aim to follow today.

I’ve learned that every man needs mentors—people who have gone before you, who can offer you wise counsel, who are willing to say what you need to hear instead of what you want to hear. That may start at home with parents and other family members. But don’t rely just on your family. Seek out folks at your school, in your neighborhood, in your career field, and most important of all, at your church (if you don’t have a church, find one!). I wouldn’t be where I am today without Lou Holtz and Pastor Whitley. They are the kind of people who are motivated to invest their time and pass on their wisdom to others. If you look for them and are open to their teaching, you’ll find those same kinds of people ready to invest in you.

Excerpted with permission from The Making of a Man by Tim Brown, copyright Tim Brown.

Who have been the mentors in your life? Who have you mentored? We’d love to hear your thoughts in the comments!